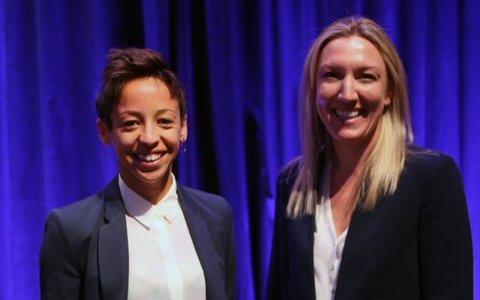 Amanda Vandervort, who most recently served as MLS's vice president of fan engagement, was named the first chief women’s football office at FIFPRO, the international players union that represents 65 players associations around the world.

More than two-thirds of these associations represent women's players, and they have been working to improve working conditions and pay at national teams in Australia, Finland, Norway and New Zealand  and leagues in Argentina, Colombia and Spain.

Vandervort (right in photo) played at the University of Wyoming and coached at NYU for first years. She was the new media manager at WPS and served as vice president of social media and CRM and vice president of fan engagement at MLS before leaving the league in May. She also served as the NSCAA (now United Soccer Coaches president in 2016-17.

"Women’s football is rapidly growing and changing, and female footballers are voicing their needs," said Vandervort, who has also served as a consultant to FIFA, teaching small member associations about communication and marketing strategies. "Now is the time for even more proactive support and even greater representation on their behalf. We’ll work hard to implement the best possible player standards.”

“Together with our member player associations," said FIFPRO secretary general Theo van Seggelen, "we are committed to supporting women’s footballers as the game develops at a rapid pace. With Amanda and Sarah’s experience and talent, we are making sure that we continue to be at the forefront of this development.”