The U.S. U-16s tied the Netherlands and the U.S. U-17s -- comprised of 2002s who weren't on the U-17 World Cup squad -- beat Turkey as the 19th annual Nike International Friendlies opened in Lakewood, Florida. 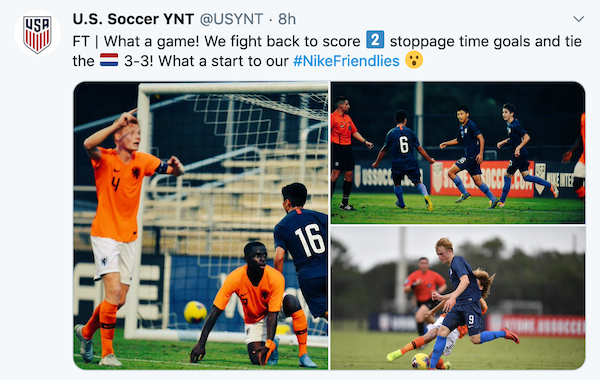 In the 1-0 victory over Turkey, Noah Jones, who plays for RB Leipzig's U-19s, scored in the 16th minute with header off a cross the Philadelphia Union Homegrown signee Jack De Vries.

Gutierrez was a late replacement on the roster for Patrick Bohui (Philadelphia Union academy).

The USA led the game against the Dutch after 11 minutes when left back Jonathan Gomez (FC Dallas academy) struck fiercely from 18 yards after receiving a cross-field pass from his outside back counterpart from Mauricio Cuevas (LA Galaxy II).

The early U.S. lead lasted only three minutes, the Dutch took the lead in the 68th minute, and extended it in the 83rd -- only to succumb to the USA's late surge and settle for a tie.

• The two U.S. teams face each on Saturday (6:30 p.m. ET). The Nike Friendlies are being stream on U.S. Soccer's YouTube Channel, Facebook page and Twitter feed.
• Junior Gonzalez, the interim coach of LA Galaxy II of the USL Championship, is serving as head coach of the U.S. U-17s, comprised of players who weren't part of the USA's 2019 U-17 World Cup roster. He's filling in for U-17 coach Raphael Wicky, whom U.S. Soccer had hoped would be occupied with the U.S. U-17s in Brazil, where they exited in the first round.
• Larry Sunderland, FC Cincinnati’s first Director of Player Development, is charge of the U.S. U-16s