Would U.S. women agree to 'equal pay' deal akin to Australia and Norway? No way

Australia’s new deal giving its women’s soccer team "equal pay" with its men’s team prompted one question: Why can’t we do this in the United States?

The simplest answer is this: The U.S. women would certainly not agree to such a deal. Nor would their advocates and a lot of the media.

The simplest reason why this deal would fail is what Paul Kennedy reported last week: The deal does not address the difference in FIFA (or UEFA or CONCACAF) prize money. The percentage of prize money is equal, but the numbers each team would get for similar results are heavily skewed toward the men.

Beyond the bonus money, though, each deal has some issues.

Norway found a novel way to pay its men and women equally. Barely pay them.

When the deal was announced, the pot of money for the women’s team was reported to be 6 million kroner. That’s $651,000.

Not per player. For the whole team.

The men and women also get the same percentage of prize money, and it’s not great: 25%.

To put this in perspective: In 2014, U.S. Soccer earned $1.5 million in preparation money for the men's World Cup after qualifying, but players split a bonus of $2.5 million. For reaching the knockout rounds, the U.S. earned $9 million in prize money, from which nearly $7 million wound up in the players’ hands by the time roster bonuses, the bonus for points earned in the group stage, and the bonus for reaching the round in question are compiled. That’s a handy 77% of FIFA’s prize money.

The women get even more in percentage terms. FIFA awards $4 million to the Women’s World Cup winner. The players each earned a roster bonus of $37,500 for a team total of $862,500. The victory in the final earned the players a total of $2.53 million. Add in the Victory Tour bonus of $1.4 million, and the women’s team earns far more than 100% of FIFA prize money.

It’s not as if Norway is a particularly small federation. The annual report shows revenue of 895,115,000 kroner, or roughly $98.5 million. Aside from The Year of The Great Copa America Centenario Windfall, U.S. Soccer has never been above $127 million. Prior to 2015, U.S. Soccer’s annual revenue was under $80 million.

So how would the U.S. women (and men) fare under Norway’s deal? Negatively, of course, but thanks to the magic of spreadsheet formulas and a lot of transcribed numbers, we can run a simulation for more detail.

The simulation takes the current collective bargaining agreements, albeit with a couple of unknowns, and applies them to 2013-18 game results. For the men’s team, it should be very close to the actual 2013-18 pay totals. For the women’s team, it’s not intended to show actual pay because the women got a new CBA in 2017, and the purpose is to project what the current CBA would produce over a typical six-year span with a World Cup championship. (Their actual pay, of course, would be quite a bit lower because the previous CBA’s numbers weren’t great.)

(I already ran the numbers on back pay and came up with a figure over $50 million over six years, but that’s predicated on the women’s team getting more than $26 million for winning the World Cup. That’s probably not on the negotiating table to which the lawsuit’s judge has all but handcuffed the disputing parties.)

The projected six-year pay totals, using U.S. 2013-18 game results to see what the U.S. teams would make under Norway’s pay structure in comparison to the current U.S. structure:

It’s safe to see neither U.S. team would be pleased with that.

How about the more recent “equal pay” deal? 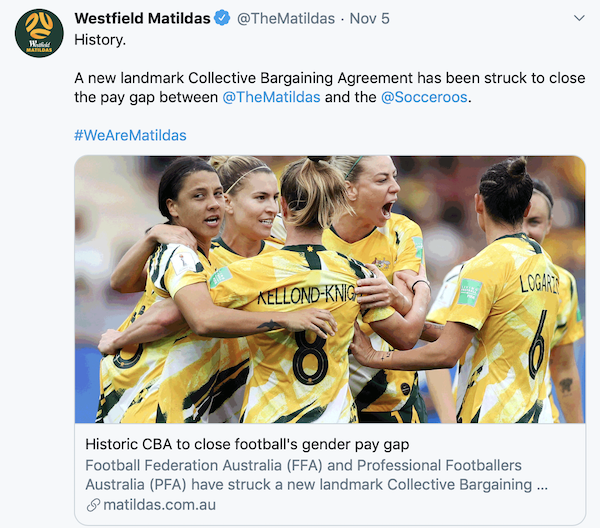 The numbers of the Australian deal are certainly better at first glance. The bonuses across the board are better than Norway’s -- 36% of prize money for some tournaments, 40% for winning the Asian Cup, 40% for qualifying for the World Cup and 50% for reaching the World Cup knockout rounds.

The base pay is a novel revenue-sharing plan. The teams start with a total of 19% (9.5% per team, not including a 5% share for youth national teams) of “player-generated revenue” and gradually rise up to 22%.

So when we run those numbers through the simulation, we get these six-year totals:

One catch: How do you define “player-generated revenue”?

For the U.S., I used 100% of the money Soccer United Marketing gives the federation, 100% of national team game revenue and 75% of the money given directly from Nike. (Some sponsorship money has been specifically earmarked for youth development in a given year.) Then I subtracted the prize money from the World Cups, Gold Cups and Copa America. That works out to roughly $385 million over six years.

Australia clearly has a different definition. Its overall revenue, like Norway’s, is in the $90 million range. But its CBA fact sheet says the 5% of player-generated revenue it’ll give to the youth national teams is expected to be approximately $1.1 million Australian, or $759,000 in U.S. money. Multiply that by 20 to get to 100%, then multiply that by six for a six-year total, and you get just over $90 million.

Using that calculation of player-generated revenue, the salary figures drop rather heavily:

The federation would probably argue for a calculation closer to Australia’s, while the national teams would argue that my calculation is much better. (You’re welcome.) The most reasonable number is probably closer to mine.

More importantly, the Australia deal is a big step forward from the Norway deal. By taking pay away from a flat fee and going to a revenue-sharing model, the teams and the federation have every incentive to work together as partners. And the bonus money isn’t bad -- for the continental championship (Gold Cup or Asian Cup), Australia’s bonuses are better than the USA’s.

Australia may indeed set a new template. The U.S. men might actually go for that, at least if the revenue calculation is similar to mine and their pay creeps upward, with the potential to go higher if both the men’s and women’s teams rake in the revenue.

But the U.S. women have dug in for a fight that includes the World Cup bonuses. As it stands now, they get a much higher percentage of FIFA prize money than the men get. If they settle for anything less than the more than 100% they currently get, a windfall they can justify by pointing to increased sponsorship on top of the prize money, they’ll be accused of caving under pressure.

As always, both players associations and U.S. Soccer are welcome to offer corrections and clarifications. Or perhaps they’ll focus their energy on settling this case so everyone can work on strengthening the NWSL, repairing the problems in youth soccer that will spill up to the senior level, and maybe beating Canada.