The USA put itself in a position to win its group and advance to the semifinals in the Concacaf Nations League thanks to a 4-1 win over Canada in Orlando.

After the 2-0 loss to Canada in Toronto, one of the USA's worst performances in a competitive Concacaf match, the USA needed to respond and it did with three goals in the first 34 minutes. But the USA was again sloppy for much of the match and benefited from a Canadian showing in Orlando that was even worse than the U.S. performance a month earlier on the road.

The USA will win Group A if it beats Cuba on Tuesday in the Cayman Islands. The loss might have dropped Canada out of the Concacaf top six in the FIFA rankings. The top six teams in the June 2020 rankings will advance to the Hexagonal, Concacaf's main competition for 2022 World Cup qualifying. 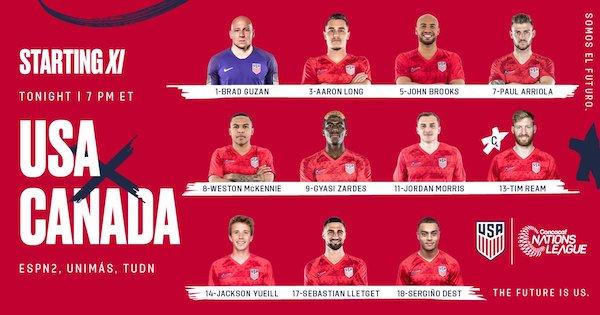 Brad Guzan did not have a lot to do as the USA built a 3-0 cushion, but he had to dive to stop Alphonso Davies' shot in the 84th minute after the Bayern teenager weaved through the U.S. defense with a chance to reduce the U.S. lead to 3-2.

In his debut in a competitive match that officially tied him permanently to the USA, Sergino Dest demonstrated why he attracted so much interest from the USA and his native Netherlands. He was involved in the first two U.S. goals, playing on Sebastian Lletget's corner kick that was deflected to Jordan Morris in the 2nd minute, and playing a simple header to Paul Arriola that started the counterattack that led to the second goal in the 23rd minute. Dest consistently attacked and was the best U.S. player at finding his teammates. John Brooks lived dangerously with two early fouls and a no-call for which the Canadians wanted a penalty kick in the 22nd minute, but he also cleaned up a lot of balls played into the U.S. area and started the third goal by playing out of pressure in the back, no small feat on a backline that has struggled with the ball. Tim Ream fed Aaron Long for the third U.S. goal in the 34th minute when his out-swinging free kick was easily headed into the goal, but he was later beaten by Steven Vitoria at the far post on the Canada goal in the 72nd minute.

Sebastian Lletget's corner kick set up the first goal, and he was fouled on the play that led to the third goal. He created the most problems for Canada other than Dest, pupping up at different positions in midfield. Jackson Yueill and Weston McKennie struggled to dictate the rhythm of the game, especially after the USA opened up a three-goal lead in the first half, but the three midfielders did a good job of limiting Canada's opportunities.

Five days after winning MLS Cup in Seattle, Jordan Morris had a big game against Canada, scoring the first goal, setting up Gyasi Zardes for the second goal and winning the ball in midfield that started the counterattack on the play that ended with Long's headed goal. Zardes got open to put away Morris' cross for the second goal and added a second goal of his own in the 89th minute with a driven shot on target. Paul Arriola's lofted ball over the Canadian backline found Morris, who was wide open to feed Zardes.

Alfredo Morales came on for Lletget but couldn't put his stamp on the game. Tyler Boyd and DeAndre Yedlin, who fed Zardes for his second goal, were late subs.