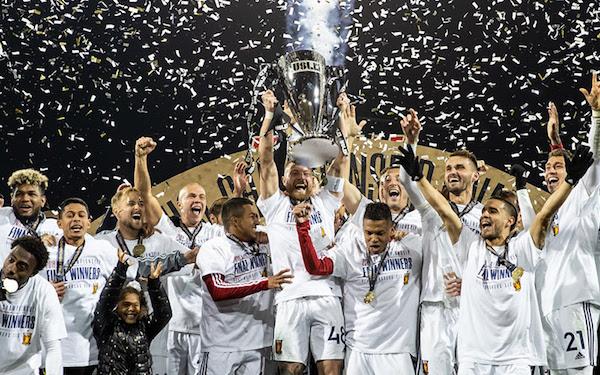 The Real Monarchs became the second MLS-operated team to win the USL Championship, getting a big help from two players on the first champion operated by an MLS team.

Polish-born Konrad Plewa and T&T youth international Noah Powder, who started their pro careers with the New York Red Bulls II, scored to break a 1-1 tie and give the Monarchs a 3-1 win over Louisville City before a sellout crowd of 7,025 at Lynn Stadium on the University of Louisville campus.

In 2015, Real Salt Lake launched the Monarchs, who have been one of the most consistent MLS second teams in the USL. While RSL has a strong record of sending academy players to the pros -- seven are on the U.S. under-23 national team -- they have typically bypassed the Monarchs, who are relied on older players.

Two of the other heroes of the Monarchs' victory in Louisville are young RSL Homegrown players.

UCLA product Erik Holt tied the game in the 25th win when his first-time shot crept past Louisville City goalkeeper Chris Hubbard. In goal, 18-year-old David Ochoa, one of the top U.S. goalkeeping prospects on the Olympic horizon, made six saves for the Monarchs, who won their second trophy after winning the USL Shield in 2017.

Louisville City was looking to become the first U.S. outdoor pro team in more than half a century to win three straight league titles. Dane Magnus Rasmussen scored his 17th goal of the season from close range in the sixth minute to put Louisville City ahead.

After Holt's goal, Plewa scored on a header to put the Monarchs ahead just before halftime, and Powder added an insurance goal in the 66th minute.

Plewa came to the United States to play college soccer for Seton Hall and immediately latched on to the Red Bulls' youth system. In his second season with NYRBII, Plewa suffered a stroke from a rare blood disorder but recovered to play in every game en route to the 2016 USL Cup title on a team that included Aaron Long and Tyler Adams, who are now U.S. internationals.

“This means everything," said Plewa, who was named the final's MVP. "My parents, my nephew, they’re all right there and to do it in front of them is quite surreal as I haven’t really had many games in front of them the last two years. But I wish I could hand this to the entire squad, it’s not just me, it’s everybody behind me, the whole organization, everybody is an MVP here.”