When Diego Maradona  signed for SSC Napoli from Barcelona in the summer of 1984, the first question he was asked at his debut press conference was whether he knew that the camorra (mafia) controlled much of the city's money, and that a lot of that money was connected to the soccer club. Maradona looked perplexed, and his new club President, Corrado Ferlaino, stood up to answer on the player's behalf. How dare the journalist ask such an impertinent question, Ferlaino fumed, stereotyping the city and insulting its people in such an outrageous manner. The president was then applauded as he ordered the journalist to be thrown out of the press conference. 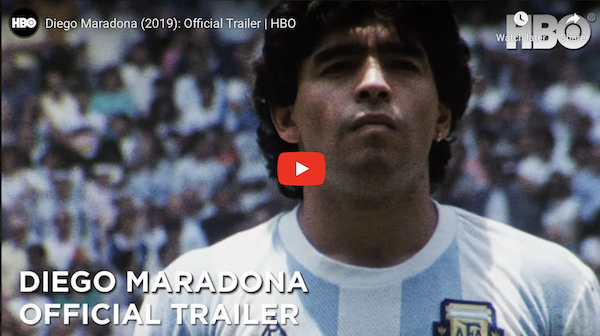 Seven eventful years later, the period covered by Asif Kapadia's excellent documentary film "Diego Maradona," the record signing was suspended by the Italian soccer federation after testing positive for banned substances. While he had lead the perpetual Serie A strugglers to two Italian championships, an Italian Cup and a UEFA Cup title (not to mention his country Argentina to two World Cup finals, in 1986 and 1990), he had also become the camorra's tool. In exchange for cocaine and prostitutes, the world's greatest player was used by the powerful Giuliani family to publicly bolster both their image and their dubious businesses.

The documentary draws on mostly unseen archive footage from Maradona's Napoli years, while the voices belong to the most important people who were there at the time -- Maradona himself, the personal fitness trainer who helped him to continue playing at the highest level despite his drug addiction, his ex-wife Claudia, his sister, his former teammates, and a variety of fans, journalists and historians. While the overall narrative of Maradona's ups and downs in Italy is well known, it is here depicted in focused detail with frank and honest analyses from all involved.

When Maradona arrives at Napoli in his mid-20s he is still a player with a smile on his face, despite having just gone through two injury-plagued years at Barcelona. He is lucid and articulate in his interviews, and focused on his soccer, despite having a reputation as a party animal. As a child of the poorest slum of Buenos Aires, he identifies with the adulatory fans because their city is slandered as a pit of filth and corruption by the rest of Italy. The documentary airs the bilious chants of the Juventus fans before a game in the 1986-87 season, and the ensuing joy and mayhem when Napoli wins the game 1-0 thanks to a Maradona free kick.

The footage draws the viewer in to the claustrophobic pressure of Maradona's world, constantly pushing through crowds, being shoved into vehicles that then speed away, surrounded by photographers and hangers-on, and being paraded at opening events to promote, say, a new business on behalf of the gangsters who inveigled their way into his life and then took it over. Maradona would play on a Sunday, party until Wednesday, and then begin the recovery program to wash the drugs out of his system before the following weekend's game.

The on-field footage is breathtaking, most of it filmed from the sideline and highlighting the Argentine's grace, speed, skill, dexterity and endurance, even though he is brutally fouled time and again. One commentator points out that Argentina's 2-1 victory over England in the quarterfinal of the 1986 World Cup perfectly sums up the schizophrenic nature of his entire career. First he deliberately scores a goal with his hand -- Maradona the cheat. A few minutes later he scores what is arguably the greatest goal of any World Cup -- Maradona the genius, the hero, the god.

His personal trainer Fernando Signorini talks of the split between the real person 'Diego' and the less pleasant persona of 'Maradona,' used to face up to the over-expectant outside world outside of his private sphere. The longer he spends in Napoli, the more we see of the latter. The smile disappears and the strain shows. He lies about his love-child with his sister's friend, Cristiana Sinagra. He expresses his wish to leave the club, but Ferlaino won't let him go. When stricter doping tests are finally introduced, a one-year ban effectively ends Maradona's career and prompts a more drastic descent into addiction, ill-health and obesity.

I've seen reviews decrying this documentary as overlong and tedious. For those of us who were fascinated by Maradona's abilities and liabilities in the 1980s, however, this two-hour movie is a measured masterpiece. The footage was reportedly cut down from 500 hours of previously unseen film. I'd not only watch it again, but stand in line for the outtakes too.

• "Diego Maradona" is available on HBO and Amazon Prime.