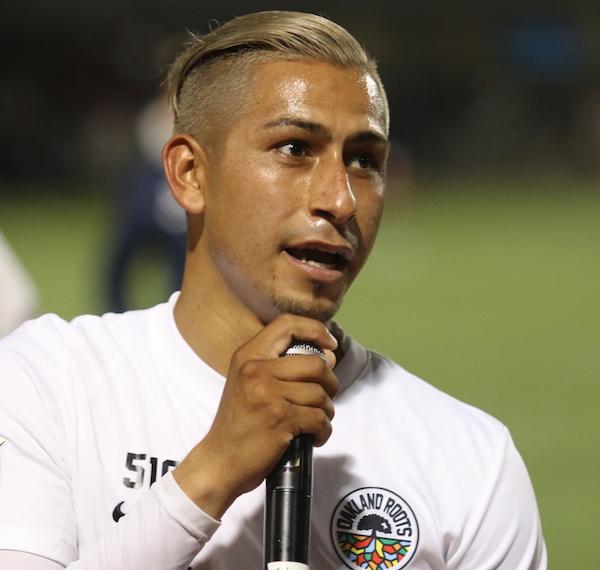 “I’ve learned more about the game from coaching,” said Joya, who turned 26 in September. “When I’m playing, I sometimes catch myself thinking, I would say this to my player right now, so I’m going do it.”

Raised in San Jose, California, Joya started out with Mexico’s Santos Laguna, where he was a teammate of Herculez Gomez, and debuted in Liga MX shortly after his 19th birthday in 2012. He played for the USA at the 2013 U-20 World Cup and went on loan to the Chicago Fire. Joya shuffled between MLS and Mexico before his homecoming last year after playing for Irapuato in the Mexican third division in the Clausura 2018 season.

“After seven years away from my family and my community, I decided it was time to come home,” Joya said. “I had two options to sign in Mexico, but the money wasn't right.

“I've never been about the money but I did have to understand I was 25 and I'm not going to be there just to be there. I have my home here, I have to pay rent, my car insurance, to provide for my fiancée.”

Joya coaches six teams – two each at U-14, U-13 and U-12s – at LFC Liverpool International-Bay Area in Los Gatos, about a 1-hour drive (depending on traffic) south of Oakland.

Last April came the opportunity that enabled Joya to continue his pro career while living in the Bay Area. The Oakland Roots made Joya their first big-name signing going into their inaugural season in the NISA. 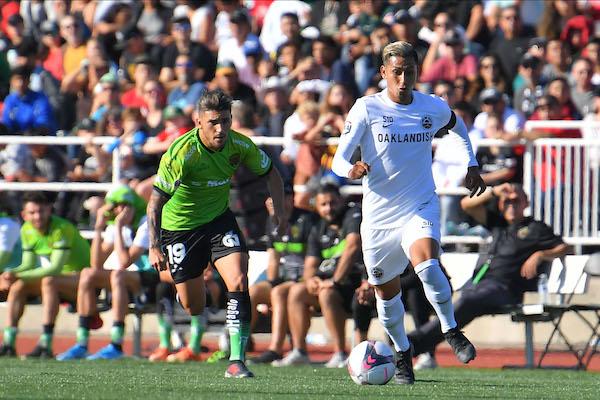 Among those joining Joya at Oakland Roots were Honduran World Cup and MLS veteran Víctor Bernárdez and Jack McInerney, who like Joya turned pro out of high school. The 27-year-old McInerney, who started out with the Philadelphia Union in 2010, scored 43 MLS goals in 177 games. Paul Bravo, one of the most successful Bay Area soccer products, served as head coach for the fall half of the NISA season.

During a one-year buildup, Oakland Roots connected with practically every branch of the Oakland area soccer community, including inner-city programs. They also partnered with Oaklandish fashion line to create merchandise that grew popular well before the first home game – spotted in a G-Eazy video and donned by Oakland-raised NBA star Damian Lillard.

The team’s first four home games at Downtown Oakland’s Laney College Stadium, with a capacity of 5,500, all sold out. Chris De Benedetti wrote in the East Bay Express that Roots games “brought Oaklanders of all backgrounds together in a joyous festival that celebrated civic pride” … true Oakland gatherings “bringing together a great but complicated city in celebration of itself.”

“It’s a big party,” said Joya. “A big, respectful party. During the game, I’m totally focused on the play and shut out everything else. But when we score a goal, I obviously look around and, wow, I see the atmosphere, and I see how great it is.

“When they approached me and explained what they were aiming to build, I believed in the organization. I said yes right away. But I can't deny the fact that I didn't know it was going to be this big or have this big of an impact.” 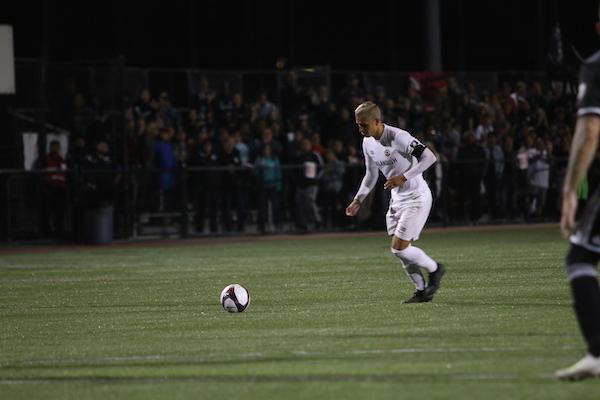 A full schedule -- coaching several teams and playing pro soccer – is something Joya has been used to for a long time. As a teenager, while attending Overfelt High School in San Jose, he often went to school with four hours of sleep because at age 13 he started helping his mother with her janitorial service. That’s in addition to playing club soccer.

His clubs included Hayward Tecos, Juventus, where a teammate was Sebastian Lletget, and De Anza Force, for whose Development Academy team he starred. His first soccer, though, was pickup play.

“It was something I did around my neighborhood,” said Joya, whose mother emigrated from Tepic, Mexico. “My mom would work all the time. My uncle, her brother, he was there at home taking care of me. He met a friend who had a soccer team and he took me out. I joined the team. My uncle took me to practices and games.”

His coach at Santos Laguna was Benjamin Galindo, whose playing career included 68 games and 28 goals for the Mexican national team in 1983-1997, the 1994 World Cup and Copa Americas in 1993 and 1995. He’s currently a San Jose Earthquakes assistant coach.

“In a way, he started my pro career,” said Joya. “He gave me the trust, gave me the confidence to play in the Mexican first division. He’s right there with Tab Ramos.”

Ramos, while U.S. U-20 head coach, brought Joya into the national team program and made him captain of the team that finished runner-up to host Mexico at the 2013 Concacaf U-20 Championship.

“I loved playing for Tab,” Joya said. “Tab overall as a coach, as a friend, as a person – a great human being. I learned a lot from him. Not only the soccer side of it, but the confidence side. He taught me a lot. Having trust, having faith in myself, being a leader out there. I thank him for that. I'll always thank him.”

Ramos, besides recalling what a positive an influence Joya had on the team, said an example of Joya’s personality was that:

“When our team left a hotel, the staff would come out and hug Benji good-bye.”

At the 2013 U-20 World Cup, the USA failed to reach the second round from a group that included European champion Spain and Ghana, but Joya started in a 1-1 tie against eventual champion France, whose lineup four players who ended up on France's 2018 World Cup championship team: Paul Pogba, Samuel Umtiti, Florian Thauvin and Alphonse Areola. (Also in the French squad were Geoffrey Kondogbia and Lucas Digne.)

“I’ll never forget flying into Istanbul,” Joya says, “driving by the Galatasary stadium and getting the chills. It was always my dream to play in a World Cup for the USA, whether it was the 17s, 20s, or the men’s. The USA has given me a lot.”

Joya started coaching when he’d return home from breaks in his pro career.

“I didn’t feel like just staying at home,” he said, “and I wanted to give back to the community. I would do two-hour clinics, with 60, 65 kids. I did want to make some cash, but I only charged $5 a head. It worked out for them, it worked out for me.” 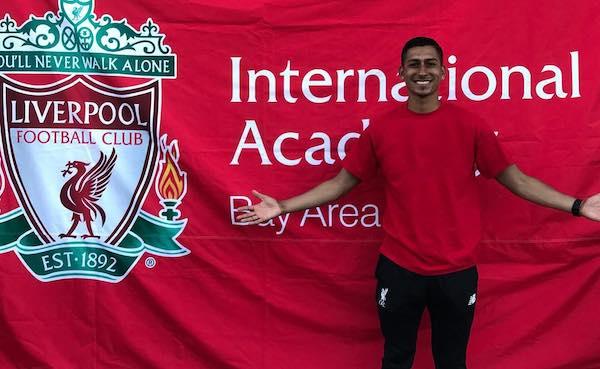 “I'm not a yeller,” he said. “I work with them at training. I tell the players and the parents, I'm not going to joystick. I'm here to coach in trainings, and have fun. Games are to enjoy. Obviously, I give some pointers here and there. Like move from a 4-3-3 to a 4-4-2 if we have to. They have all my trust.”

Dealing with parents, he said, is no problem:

“So far, I've had zero complaints from parents. I communicate every Monday. I send out an email. If they have any questions, they can always call or text me. Everyone plays with me so playing time is not an issue.”

Joya keeps track MLS, and is particularly impressed with LAFC and Atlanta United, and believes MLS has gotten more technical since he played 12 games with the Chicago Fire in 2014, when he was 20 years old, or two seasons later when he failed to break through at Sporting Kansas City. He thinks maybe he wasn’t assertive enough. Perhaps intimidated because he was among the youngest.

“I’ve always believed it’s important in life to be self-critical,” he said. “It’s how you grow. And when you don't make starting 11, you have to understand it’s for a reason.

“Looking back when I was in MLS, maybe I needed to be a little to more a little bit more ‘greedy,’ try to be a leader. Or at least try and communicate more with my team. Not be the shy one. Not be the quiet one. That’s something that Oakland Roots has really helped me out with. Steven Aldrich [chairman], Benno Nagel [president], Coach Paul, Coach Jordan [Ferrell], Víctor Bernárdez – they’re helping with that. The way they transmit what they want is great."

“I’m pretty sure we can do big things. I’m glad I made the decision to stay here. We can keep building on this.”