Cuba hosted the USA in the Cayman Islands and Coach Gregg Berhalter's crew coped well with the cow pasture conditions, hitting the net 34 seconds after kickoff to ensure there would be no drama against the world's 179th ranked team. The 4-0 win on Thursday comes after the USA beat Cuba, 7-0, at home. In comparison, Group A rival Canada had mustered only a 1-0 win over Cuba in the same stadium and a 6-0 win in Toronto. The U.S. victory, on the heels of its 4-1 home win over Canada, sends it to the 2019-20 Concacaf Nations League Knockout Round in June 2020. 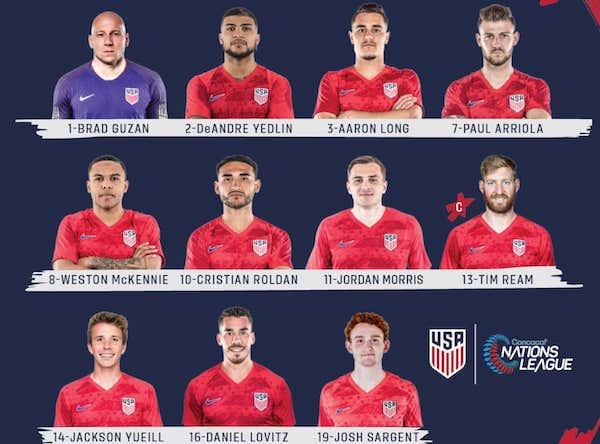 Brad Guzan dived to stop a low deflected shot in the first half and a header in the second, securely handling two Cuban threats that posed minimal danger. His footwork on back passes impressed on the bumpy field.

Daniel Lovitz led the game in fouls committed with four, but also in fouls suffered. After one those fouls, he delivered a dangerous free-kick cross. While he kept pressure on the Cubans moving up the left wing, DeAndre Yedlin did so, but less effectively, on the right wing. On the third goal, on a corner kick, Aaron Long had a header blocked, a low pass cleared, then struck a pass that deflected off Jose Almelo and was goal-bound as Jordan Morris poked it over the line. Captain Tim Ream led well. He held down the fort as his three backline mates attacked frequently. He headed away a free kick cross, shut down wing play to cover for Yedlin, and passed crisply.

Cristian Roldan covered lots ground and served as the main connector as the USA had 71% of the possession. He met Lovitz's free kick in the 38th minute with a diving header that provided the best non-goal highlight of the game. He delivered a brilliant chip to the wing that Tyler Boyd wasted. Weston McKennie passed the ball to Long on the third goal, and was in on the passing sequence for goal No. 4. His close-range volley in the second half missed the goal by embarrassing height. Jackson Yueill sent the perfect cross-field pass to Morris on the second goal.

Josh Sargent prevented goalkeeper Sandy Sanchez from grabbing Paul Arriola's low pass near goal line to get the USA on the board super early. Sargent scored his second goal with a deft left-footed shot on the first touch. With five goals and four assists, Jordan Morris has been part of half of the USA's 16 goals in the last five games. Before his poached goal, he finished calmly from close range -- and made life tough for the Cuban backline before exiting at halftime.

Reggie Cannon's overall sharp showing included a cross that Tyler Boyd met wide of the far post and volleyed with a clever flick to Sargent for the fourth U.S. goal. Upon entering in the 69th minute,  Alfredo Morales failed to beat Sanchez from close range with his first touch and was lucky not to be called for a penalty-kick foul a minute later.