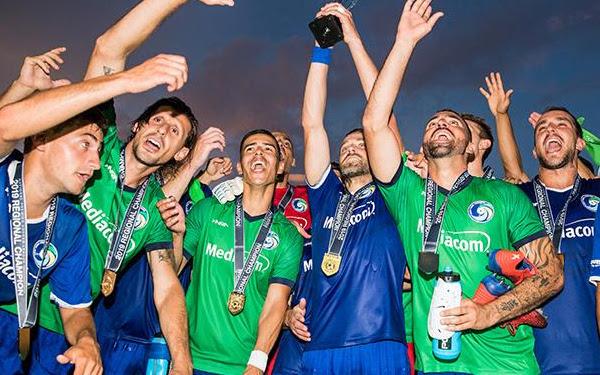 After the NASL and NPSL, the New York Cosmos will be moving to the National Independent Soccer Association in the fall 2020 season.

The Cosmos joined the NPSL in 2018 after the NASL collapsed following the 2017 season. That followed U.S. Soccer's decision to deny the NASL Division II sanctioning for 2018. The NASL then sued U.S. Soccer (and later added MLS) in an antitrust suit challenging U.S. Soccer's Professional League Standards.

Instead of seeking Division III sanctioning, the NASL sat out 2018, and its clubs moved to other leagues. Five of the eight are still operational at the professional level -- the Cosmos and Miami FC in NISA, Indy Eleven and North Carolina FC in the USL Championship and FC Edmonton in the Canadian Premier League, Canada's new league.

In 2019, the NPSL operated the Members Cup in the fall after efforts to launch the pro Founders Cup failed. The Cosmos played in the Members Cup with champion Detroit City FC and Chattanooga FC, which both had already announced plans to move to NISA in 2020.

The NISA is coming off a fall season of its own in which eight teams started out and seven finished. Philadelphia stopped playing after one game. NISA operates as a Division III league, so the Cosmos move is subject to approval of the federation. It will play split-seasons (spring and fall).

"Over the past several months," Cosmos acting chief operating officer Erik Stover said in a statement, "the Cosmos have been actively engaged in conversations to join NISA in 2020.  NISA has a very strong core of independent clubs including old rivals Chattanooga FC, Detroit City FC and Miami FC.  The leadership of NISA has been very supportive of adding the Cosmos organization to their membership.  We expect to have more information share with our fans in the coming weeks."

They played the 2019 NPSL season at the Mitchel Athletic Complex, located in Uniondale, New York. Their return to the pro level will give five pro teams in the New York Metropolitan Area in 2021: NYCFC in The Bronx, the New York Red Bulls in Harrison, New Jersey, the Red Bulls II in Montclair, New Jersey, and David Villa's new Queensboro FC in Queens.