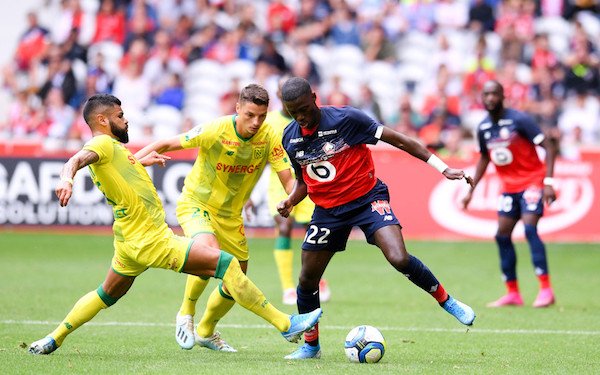 Friday's PSG-Lille game should have been 19-year-old Tim Weah's first trip back to the Parc des Princes since he was sold this summer for one of the largest transfer fees ever paid for an American.

Weah grew up in the PSG youth system, moving from New York when he was 14, and he debuted at the club, where his father, George, starred, when he was 18.

Breaking into the star-studded lineup was always going to be a challenge, so after only five Ligue 1 appearances at PSG and 13 games on loan at Celtic in Scotland the move this summer to Lille for $11.4 million and a cut of any sell-on fee seemed to be ideal, a chance to play in the UEFA Champions League -- Lille finished second in Ligue 1 last season behind PSG -- and for a club that has a reputation for developing young players.

Lille's most famous product is Eden Hazard, now at Real Madrid. This summer, it collected more than $160 million in transfer fees for players, including more than $90 million for Ivorian winger Nicolas Pepe, sold to Arsenal.

Weah, who starred for the USA at the 2019 U-20 World Cup, might not have been a full-time starter in his first season at LOSC, but he would have been in the mix to get plenty of playing time.

But five months after joining Lille, Weah finds himself in Madrid, where he is rehabbing a hamstring injury that has sidelined him for almost three months.

Weah played two Ligue 1 games for Lille in August and was slated to be called up to the U.S. national team for matches against Mexico and Uruguay in September when he was injured sprinting at the end of practice.

At the end of September, Lille coach Christophe Galtier said Weah was a little behind schedule in making his return. At the beginning of November, he said Weah should be ready for the PSG game after the November international window.

Now, Galtier isn't sure when Weah will play again.

"Timothy Weah is at a rehabilitation center in Madrid, by agreement with our doctor," he said on Thursday, ahead of the PSG match. "He is in good hands. Will be be ready before the winter break? To train, I'm convinced. But ready to play? That's another thing."