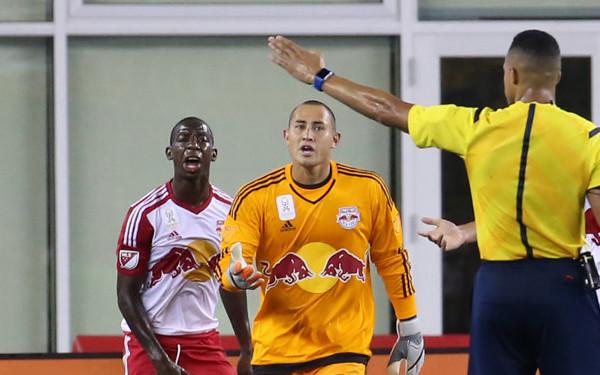 There was a reason for that poignant hug between Luis Robles and Bradley Wright-Phillips at the end of the New York Red Bulls' 4-3 loss at Philadelphia in Round One of the 2019 MLS playoffs.

Robles and Wright-Phillips had played their last game for the Red Bulls.

On Thursday, the Red Bulls announced that the pair won't be returning in 2020.

Robles played 261 regular-season and playoff games over eight seasons; Wright-Phillips 215 games in seven seasons. They were members of Red Bulls teams that won Supporters' Shields in 2013, 2015 and 2018.

Robles, 35, was the Red Bulls captain the past two seasons. He set an MLS record with 183 consecutive complete games played and was named the 2015 MLS Goalkeeper of the Year.

“The entire organization would like to thank Luis for his contributions to the club over the last eight seasons,” said sporting director Denis Hamlett in a statement. “During his tenure, Luis was an important part of the team and the organization, leading our efforts on and off the field. Luis’ play and work ethic speak for themselves when you look at the individual and team success during his time. These decisions are never easy and we wish Luis and his family the best in the next stage of his career.

Luis Robles says his goodbye to the organization. pic.twitter.com/stwRrn6lMU

“Brad will go down as one of the best forwards in MLS history, and certainly a major part of the success of this club since he arrived in 2013,” Hamlett said. “Brad had an incredible run with this club and will be remembered here as a great player, teammate, and person, and we thank him for all that he has accomplished and helped the club accomplish. This is another decision we do not take lightly and we wish Brad and his family all the best.”