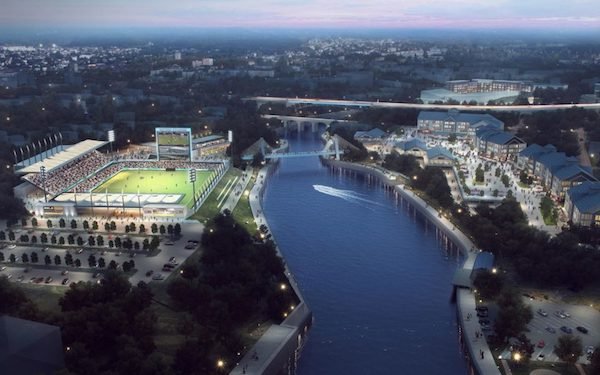 Rhode Island was one of the original U.S. soccer hotbeds.

It was home to teams like J.&P. Coats in Pawtucket, beginning at the turn of the last century, and later the Providence Clamdiggers. The great Billy Gonsalves was born in Portsmouth and later moved to Fall River, in Massachusetts.

In 1974, the Rhode Island Oceaneers, coached by Manfred Schellscheidt and featuring players like Mohammad Attiah and Arnie Mausser, won the American Soccer League title in their first season.

Pawtucket is hoping to bring back pro soccer back to Rhode Island. On Monday,  the $400 million Tidewater Landing project that will include a soccer-specific stadium for  a USL Championship team was introduced.

Plans call for the waterfront downtown stadium to seat 7,500 fans, and a Pawtucket team to begin play in 2022. The project would be the largest development project in Pawtucket history. The soccer project replaces a baseball stadium project that became moot when the Pawtucket Red Sox moved to Worcester, Massachusetts.

The project is being led by Brett Johnson, the Phoenix Rising's co-chairman and a partner in Fortuitous Partners, a real-estate investment firm that develops sports-anchored mixed-use real estate projects.

To move forward, the land for Tidewater Landing needs to be acquired and funding finalized for stadium construction and infrastructure work.