The Age of Football: The Global Game in the Twenty-first Century by David Goldblatt, (Macmillan)

The Names Heard Long Ago: How the Golden Age of Hungarian Football Shaped the Modern Game by Jonathan Wilson, (Blink) 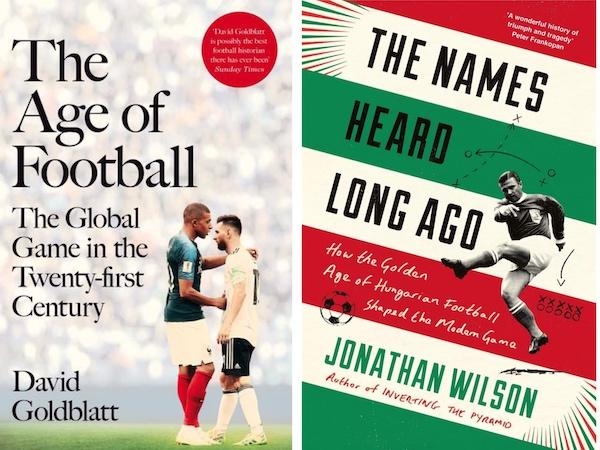 Britain's most prolific and widely read soccer authors, David Goldblatt and Jonathon Wilson, have reached the stage where it has apparently become difficult to offer an objective assessment of their books. Reviews will point to their past works as evidence of quality, while summarizing the latest in the form of an extended jacket blurb. In the incestuous circles of soccer journalism, however, critics often seem too tentative to answer the most important questions: Is this book any good? And if so, is it good enough to make it worth reading?

Goldblatt's "The Age of Football" is not quite such an epic work as his shelf-straining history of soccer "The Ball is Round." Still, it's long enough, straddling the five continents to offer an overview of soccer's health. The overwhelming conclusion: the state of our game is not good. Corruption, poor administration, avarice and death blight these pages from cover to cover, with only the odd scrap of optimism thrown in to stop the reader closing the book and taking up embroidery instead.

In terms of its scope, "The Age of Football" is a roller-coaster ride around a theme park of greed and depravity, and is a comprehensive catalogue of the scandals and stadium disasters of the past 50 years. I can only recommend it as a work of reference, because unless you've been watching nothing but Real Madrid from the safety of a tint-glassed executive box for the past few decades, there is little new information in this book. There are no author-sourced interviews, and little research beyond the archives of readily available media and the internet. Reading it is like being hit over the head with a rhetorical hammer, and finishing the book is like walking out of the stadium after a 5-0 defeat -- your depression may only be tempered by relief that it's all over.

Goldblatt also has the machinated habit of backing up any point with a quote in the form of, "As [insert name] once said, [insert quote]." Over and again. Add to this the sporadic inaccuracies (there never was a team in Wales called Trans Network Solutions) and the endless, needling subjective asides ("Even Celtic, in a good year like 2016 ... were at best a strong Championship club." Really? How do you measure something like that?), and you wonder why Goldblatt's books are subject to eulogy. He writes in a cogent, attacking style, but maintaining that pace over several hundred pages is like sprinting a marathon. It's not long before exhaustion kicks in.

Nonetheless, if you want a book to goad you into a state of revolutionary anger (and there's nothing wrong with that), then "The Age of Football" could meet your needs. If you want to read a soccer book in a state of fascinated pleasure, then you might prefer Wilson's "The Names Heard Long Ago."

Where Wilson tops Goldblatt is in terms of readability and research. I believe that the two are connected. When Wilson scours the archives to unearth interviews or talks to anyone still connected with the Hungarian soccer scene of the early 20th century, it's the quotes and anecdotes that bring his material to life. That's no mean feat when you're covering teams and personalities that most of your readership might, at best, be only vaguely aware of.

So while reading about the players and coaches who gave Hungary such a key role in the formative years of soccer history, it's not important to retain any knowledge of how many titles Ujpest Dozsa won in the 1920s. What remains is the disparity of peripatetic Magyars who moved around Europe and the world, their chaotic lives and seesaw careers more often than not shaped by the political and economic situation both at home and abroad.

The middle section of the book, covering the period before, during and after the Second World War, is a profoundly affecting testament to the truth that sport may be important but, like all other aspects of mundane existence, it can be rapidly subsumed by the insanity of terror, violence and war. Players and their families you've come to love in the first section of the book disappear, last seen on trains destined for Nazi death camps.

The book lacks a linear narrative due to the nature of its material, and to contrive one would have been a dishonest reflection of the fragmented lives it depicts. Had it covered just one team, or even one person -- pioneering English coach Jimmy Hogan, say, or the utility player György Orth, labeled by Hogan as "the most versatile, greatest and most intelligent player I have ever seen" -- then the publisher would have had had an easier hook to sell it on. The strength of Wilson's approach is that it defies the demands of marketing for a simple selling-point. His books are so much the richer for it, and provide an engrossing read for all who are entranced not just by soccer's history, but also by the immersion of its characters into their social and political context. Massively recommended.


• The Age of Football: The Global Game in the Twenty-first Century by David Goldblatt, (Macmillan)
• The Names Heard Long Ago: How the Golden Age of Hungarian Football Shaped the Modern Game by Jonathan Wilson, (Blink)