Anson Dorrance's University of North Carolina women's team, which he has guided for four decades, faces Washington State in the semifinals on Friday aiming for a 22nd NCAA Division I title. Dorrance also coached the USA in 1986-94 as it become a world power in the women's game and won the inaugural Women's World Cup in 1991. 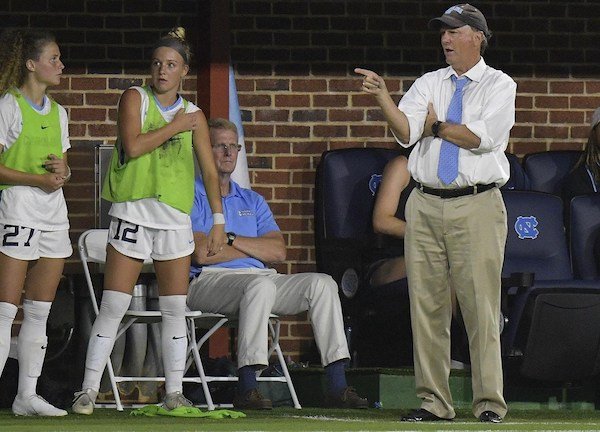 His influence on the U.S. national team program continued. No other college program has seen as many alums play for the USA. They include five on the 2019 World Cup-winning team: Crystal Dunn, Ashlyn Harris, Tobin Heath, Allie Long, Jessica McDonald. We spoke with Dorrance about his perennial college coaching success -- and for his opinions of how the U.S. Soccer Federation is running the women's national team program, from the new head coach hiring to the youth national program.

ANSON DORRANCE: Wonderful. If we're going to judge Kate [Markgraf] by the major decisions she makes, right now she gets an A+.

SA: Kate Markgraf was hired in August  as U.S. women’s national team general manager and to lead the coaching search ...

ANSON DORRANCE: I'm checking both boxes for U.S. Soccer -- I have no connection with Kate except I recruited her and of course lost her to Notre Dame -- but right now, out of the gate, A+. And Vlatko, same thing. Lots of my kids have played on all his pro teams. Everyone who played for him sings his praises. Even the kids who haven't, there was a clear lobbying effort from the elite players of the United States to have him under serious consideration by U.S. Soccer. He's one these coaches who's not only good between the lines, but also off the field in the way he treats his players, the way he respects them.

ANSON DORRANCE: I was absolutely pissed off. That is absolutely ridiculous. In this era, for someone to make that extraordinarily sexist decision, is beyond belief. I mean where the hell have they been to make that kind of decision? It angers me.

SA: Because Stewart has no experience in women's or girls soccer?

ANSON DORRANCE: And no understanding. Not that he will deliberately do a miserable job. Of course, he won't. But he has enough on his plate as it is. Goddammit, we've got to revive that [men's] side of the house. He's got his hands full. So to give him an additional responsibility, are you friggin kidding me? No, let him do that (men's) side.

We're in wonderful shape [on the women's side], but we need to concentrate on ourselves. Obviously Jill's team going right through the heart of Europe [to win the 2019 Women's World Cup] is an extraordinary statement about the United States, but still, the Europeans are on the rise. We need to focus on staying on top, so let us do our thing. 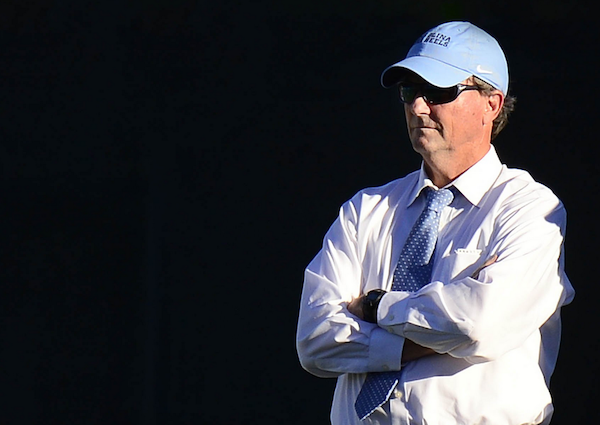 SA: Like the men's side of the youth national team program, the women's side has several vacancies at what was once a program in which national teams at each age group had a head coach. Also, April Heinrichs left the position of Women's Youth Technical Director at the end of 2018 and has not been replaced. Do the vacancies trouble you?

ANSON DORRANCE: Not immediately. But this is where I'm excited for Kate. Because even though I think her purview is the full team, we're going to have a voice in the room. And she'll also be interested in the success of the youth national team program because the feeder system for the full team are the youth teams. And the U.S. has always done a great job bringing in younger players.

Vlatko has got his hands full with what he's trying to do. But Kate, because I'm sure she's got some freedom during the day, should invest herself on discovering who the best coaches are out there and invite them in to train the youth. Make sure that part of the culture is taken care of, because that's obviously our future.

We need player development experts sitting in the room to decide on the fate of these youth teams, how we're developing them etc., and the critical element beyond anything else is the quality of the coaches you bring into these environments.

And she should absolutely inject herself into the politics, even though I know U.S. Soccer doesn't want her to.

SA: One of the obstacles to hiring youth national team coaches was introduction of a policy requiring relocation to Chicago. Your view on that?

ANSON DORRANCE: It's ridiculous. Absolutely ridiculous. Why narrow your coach hiring pool down by having all these ridiculous hurdles you have to clear? We've read that [U.S. Soccer House in Chicago] is a toxic environment, so to bring them in, to infect them in the source is absolutely insane.

What we need is a benign leadership that understands that coaches can do their jobs from where they live.

And why have them move to Chicago where they're living in a tenement for the poverty stricken because we're not paying them enough? That's absolutely insane. And the hypocrisy of the people that pushed it through who fly back and forth to Holland is just beyond belief. This is something I would love to hand off to Rachel Maddow to discuss on her program to explain it to us the way she's explained so much to me about what's going on politically. Because it's absolute madness. 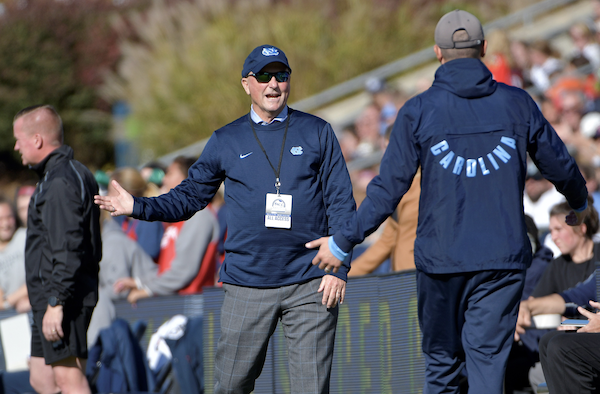 SA: Women's college soccer played the key role in the rise of American women's soccer as best in the world. Should U.S. Soccer be taking more advantage of college coaches for its youth national team program?

U.S. Soccer doesn't have to concern itself with NCAA rules. In fact, what's interesting is every time in an ACC meeting when we bring up the prospect of having the NCAA legislate against the coaches who coach in the Olympics, like [Mike] Krzyzewski and on the national team like Swanny, the athletic directors all shoot it down. The reason is because it's incredible publicity for the colleges to have their people involved. Basically if you look at from the top, it's very positive. If you look at it from the trenches, it's not, because holy crap have we lost player after player after player to Steve Swanson because he's on the staff of a national team that's won two World Cups, and on a youth team that won a U-20 World Cup. When I collide with Steve Swanson in recruiting, it's a tough battle because of his accolades with the national teams. But U.S. Soccer should not concern themselves with our politics and they should bring in every elite college coach possible to coach at all levels for U.S. Soccer.

ANSON DORRANCE: I have a huge amount of respect for a Sunil Gulati, and he once called me up and said Anson, give me salaries of the top 10 coaches in Division I. And I basically told him what it was. And I knew why he was asking me that question. He didn't tell me. He didn't have to. Obviously to bring back to the meetings to let them know, if we want to hire these guys, here's what we have to pay.

And they should pay that. Because if they want these coaches, let's pay them. We have so many elite college coaches. And let's put them in a position where U.S. Soccer is offering them a huge salary to leave their college teams because that's going to benefit all of us.

SA: What's your view on the current state of U.S. Soccer Development Academy vs. ECNL?

ANSON DORRANCE: Well, I am no longer in a full panic. Do I think the way [the DA] was rolled out was good? Or the fact that it exists is good? No. I think it was rolled out very poorly. And I think the restrictions they have are just insane. They're medieval. It's like friggin giving the men's side of the house governance over the women's side and that's just crazy.

Do I still think we should just have one group doing it? Yes. But now that it's out there, maybe I can see the positive sides of the competition between the two -- as long as we call out the DA every time they come into a home and pretend if you go with an ECNL team you're not going to make the national team. We need to eliminate that and basically any DA coach who says that and we catch it on tape picks up a $50,000 fine.

SA: You won your first national championship with the UNC women in 1981. You've won 21 NCAA DI titles since then, and we're talking on the eve of your team playing in the 2019 College Cup. How have you managed to successfully coach so many different generations of players? Surely, how players respond to coaching changes over time and many coaches who were successful in the past don't adjust.

ANSON DORRANCE: I'm a big reader. I spend all my time either reading or playing sports. I think my reading has kept me very aware of the way all us should treat people. And the different generations for me are a wonderful curiosity.

I always know when something I've said hasn't sailed. And am the first one to apologize. I apologized to our goalkeeper for how I blew her up at the half of the last game. I came into the team later with her standing there and said how sorry I was for what I said.

I'm not one of these people who thinks I know everything. If I make a mistake, I apologize immediately. I'm very comfortable within the culture to adjust with them. By the same token, I'm trying to use old school values for my culture. Our core values are very traditional, they are fundamental. There's nothing new age about anything I do.

But the area I'm been very consistent with is I want to coach a team that I would want to play on. I've always hated rules. I hate rules. So I don't have any rules.

SA: How does it work?

ANSON DORRANCE: I do believe in principle centered living. ... In order to develop a real adult, in my opinion, what you have to do is teach them to make the correct choices. And the trouble with rules is, you don't have choices. All you're doing is following rules. You have to decide whether or not you're going to follow this rule, but that's not really a choice. So your whole structure is set up without you making an adult choice.

As soon as the freshmen come in, I tell them I'm going to treat them like adults, so they've got to make good choices, and they're going to be evaluated against their choices. Not just by me, but also by their teammates. So we have a system of wonderful checks and balances on their behavior. As a result, the evolution through their four years at UNC is very visible, and I'm very proud of that.