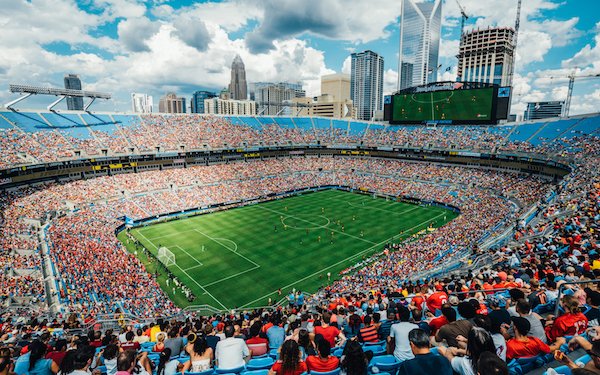 In 2019, Major League Soccer has already announced three new expansion cities -- Austin, St. Louis and Sacramento -- and it will likely announce a fourth before the end of the year.

MLS's board of governors agreed on Thursday at its final meeting of the year in Brooklyn to authorize the league's expansion committee to enter into negotiations with Carolina Panthers owner David Tepper to bring a team to Charlotte.

"No formal approval was granted today," said MLS commissioner Don Garber. "What was approved was the expansion committee to now meet with David and his staff to try to finalize an agreement."

Here are the key details:

Expansion fee? Reports suggest that Charlotte will pay a fee as high as $325 million.

When Nashville and Cincinnati were approved as expansion teams in the bidding that was completed in late 2017 and early 2018, they each paid $150 million. Sacramento, whose 2022 entry was confirmed in October, will pay $200 million.

"I've heard some of those numbers," Garber said when asked about the Charlotte expansion fee. "They wouldn't be wrong.''

Stadium? Tepper's plan is to follow the Atlanta United model and operate an MLS team out of a large NFL stadium, 75,000-seat Bank of America Stadium.

Work is necessary, though, to make Bank of America Stadium optimally suitable for soccer.

'There's a wide variety of things that they've already worked on that need to be finalized," Garber said. ''Ensuring that the supporters section is proper, ensure that they have the proper tunnels, that they have the right environments for locker rooms, the competitive environments, and to ensure that they're able to manage how they would size the stadium, which has not been finalized yet, in the event that they don't end up with 70,000 fans a game."

Soccer support? Charlotte has no prolonged history of success as a pro soccer market.

Teams have ranged from Rodney Marsh's Carolina Lightnin' in the ASL in the early 1980s to the Charlotte Independence, which currently operates in the USL Championship and averaged only 1,750 fans a game in 2019, the lowest attendance of any independent team in the league.

Charlotte has done well with international matches, however.

City support? Tepper is seeking $100 million from the city of Charlotte to help fund the soccer work at Bank of America Stadium.

James Mitchell, an at-large council member, told the Charlotte Observer that the city is prepared to offer about $100 million, funded by revenue from hospitality and tourism taxes, to pay for the work. But the Observer noted that there is no consensus yet on how much money to give Tepper.

''I don't know that I'm confident, though I'm hopeful." a cautious Garber said of securing a final agreement with the city. "The goal would be to try to finalize something by the end of the year."

Past expansion efforts? Charlotte was one of 12 expansion candidates in 2017. Marcus Smith, CEO of Speedway Motorsports, proposed a private-public partnership for the construction of a $175 million soccer stadium.

Mecklenburg county commissioners initially voted in favor of the plan, Charlotte's city council canceled plans for a vote, and it went downhill from there. Charlotte was not one of the four 2017 expansion finalists from the original field of 12.

Start date? Charlotte could start play as soon as 2021, a short turnaround time for a from-scratch MLS expansion team.

Nashville SC and Inter Miami will begin play in 2020. Austin FC is slated to open in 2021, and St. Louis and Sacramento were confirmed as 2022 entrants.

Slotting Charlotte in as a second 2021 entrant would prevent MLS from having awkward scheduling issues with an odd number of teams.

Asked by Soccer America after Sacramento was announced as the 29th team about 2021, Garber said it would be beneficial to have the 30th team begin in 2021, but "it would only be if we had the perfect dynamic and scenario for our 30th club."

Asked if there was a perfect situation for a 30th team, Garber responded, "I don't want to comment on that."

Now, we likely know his answer.