Anson Dorrance   celebrated the 26th NCAA semifinal win of his career when UNC beat Washington State, 2-1, on Friday evening, and on Sunday will aim to win a 22nd NCAA title. The Tar Heels face Stanford, a 4-1 winner over UCLA, in the Women's College Cup final in San Jose, California. 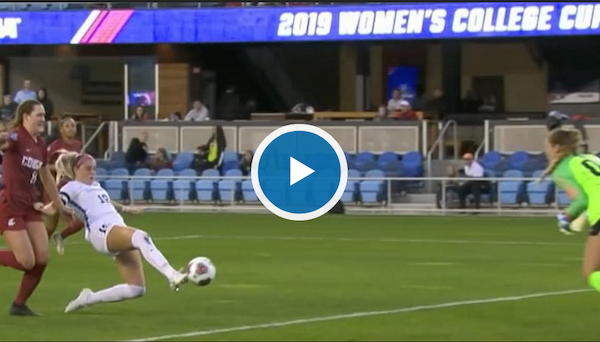 “First of all, I want to praise Washington State," said Dorrance. "They made it very difficult for us. They just were very competitive. It was just an incredibly challenging game. Soccer is just an interesting game. Honestly, if you look at the chances created, they created better chances than we did. We happened to finish the two that we created, but they created twice as many chances as we did. ... I think we were lucky to be in the final.”

Dorrance was being somewhat generous even if the Cougars will rue missed chances.

After UNC took the game's first two shots within three minutes, the Cougars definitely dominated for a stretch. In the seventh minute, goalkeeper Ella Dederick's long goal kick was relayed via the heads of Elyse Bennett and Averie Collins for Morgan Weaver to pounce on just inside the penalty area. Her sharp low shot skidded past diving keeper Claudia Dickey to put the Cougars ahead, 1-0, in the seventh minute.

The Cougars kept hold of the momentum until Alessisa Russo struck from close-range when she latched on to a clever lobbed pass from Taylor Otto to make it 1-1 in the 23rd minute.

The swift attacks by Washington State continued after the equalizer, but the Tar Heels began responding with frequent forays of their own. With eight minutes left in the first half, Ru Macherera's cross from the left flank met another UNC sub, Alexis Strickland, at the far post to torpedo into the goal with her head from close range.

The Cougars out-shot the Tar Heels, 10-8 while both had four shots on target. Referee Samantha Martinez reacted to quickly to the early fouling but couldn't possibly see all the pushing and grabbing. She kept her yellow card packed away while calling the Cougars' for 15 fouls. (Coach Todd Shulenberger and his players reacted to nearly each call as if it were a grave injustice no matter how blatant the infraction.) The Tar Heels were called for 10 fouls.

The Cougars were making their first College Cup appearance and arrived in San Jose thanks to road wins over No. 3 Virginia (3-2), West Virginia (3-0), and No. 5 South Carolina (1-0).

“It was a tough night but I'm super proud of this group," said Shulenberger. "You never like to lose, but you're playing one of the best teams in America year in year out."