Just 16 miles from its campus, Stanford will face North Carolina in the Women's College Cup final at Avaya Stadium in San Jose, California, on Sunday thanks to a 4-1 thrashing of UCLA on Friday that featured a hat trick from sophomore Sophia Smith. 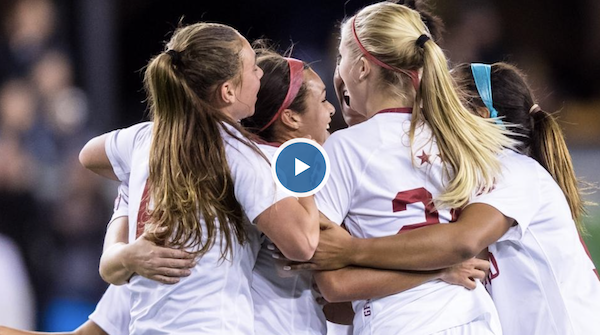 No doubt the Bruins knew they were in for a tough one, not just because of Stanford's home advantage, which was mitigated by the contingent of UCLA fans among the 7,699. The Cardinal had won its last 17 games with a 72-7 goal difference and 13 shutouts.

UCLA was riding high as well. It earned its trip to San Jose with a 4-0 quarterfinal win over defending champion Florida State. That victory was the Bruins' third straight shutout while outscoring tournament foes 15-1.

When Stanford goalkeeper Katie Meyer couldn't reach Chloe Castaneda's shot in the 7th minute, it looked brighter for the Bruins.

But the Cardinal reacted swiftly. Smith, who suffered a broken leg halfway through the 2018 season, took less than three minutes to equalize. Carly Malatskey scored the go-ahead goal in the 21st, and Smith scored her 16th and 17th goals of the season in the 31st and 52nd minutes.

“I thought it was a great team performance," said Stanford coach Paul Ratcliffe. "We started a little slow and conceded a goal. We weren’t happy about that, but I thought we responded with great character. Full credit to the squad. I thought they played really, really well throughout against a strong UCLA team.”

In 2017, Stanford beat UCLA, 3-2, in the College Cup final in Orlando and in this year's regular season prevailed 1-0.

"Sophia Smith had a day," said UCLA coach Amanda Cromwell. "She is someone that in the last game wasn’t that much of a factor against us. They had a game-plan to keep her out wide and try to exploit our three-back. We just didn’t defend as well as we could have in some critical moments. It’s hard to chase a game like that."

In the 43rd minute, Mia Fishel's penalty kick was saved by Meyer to keep it 3-1.

“Obviously, we wished we had a better effort overall, just for the game of soccer in general," Cromwell said. "You always want to offer something more in the liking of how we’ve been playing, and tonight was an off-game for us. It didn’t reflect our season."

For its part, Stanford has a chance to win its third national title, after 2017 in Florida and 2011, when it prevailed over Duke in the Georgia-hosted College Cup. This time it will be home game.