After 110 minutes of scoreless play, Stanford prevailed from the penalty spot over North Carolina to win the 2019 Women's College Cup on Sunday in San Jose, California. Neither the Cardinal nor the Tar Heels were at their best, no doubt fatigued from playing semifinals 48 hours earlier, but Stanford created the better scoring chances in a game that had few.

“It was a great battle on the field and you need a little bit of luck for PKs,” Stanford coach Paul Ratcliffe said. “It was a tough game emotionally and the momentum changed play to play.”

Sophia Smith, who scored a hat trick in Stanford's 4-1 semifinal win over UCLA, unleashed a 16-yard shot in the 34th minute that looked destined to hit the low corner of the net -- but North Carolina goalkeeper Claudia Dickey dived perfectly to pull off the game's biggest save. With two minutes left in the final overtime period, Smith banged an 11-yard shot off the crossbar. One minute before that, Dickey made another outstanding diving save, on Carly Malatskey's shot.

Stanford outshot North Carolina, 21-12, and had 14 corner kicks to North Carolina's three. But the Tar Heels' defense, led by Maycee Bell, constantly stifled Smith, Madison Haley and Catarina Macario. And after surviving the Cardinal surge following the kickoff -- four shots and three corner kicks in the first six minutes -- the Tar Heels started making it difficult for Stanford to pass out of its half.

Sloppy play plagued both teams in the second half and tenacious defense interfered with the promising forays from either side. Stanford central defender Naomi Girma should share MVP honors with Bell.

The final whistle blew after a second half in which Stanford outshot the Tar Heels, 12-5, but the three that reached Dickey weren't serious threats. Alessia Russo came closest to scoring for the Tar Heels but when she slid into the goal area to meet Isabel Cox's pass arrived a split-second too late to connect solidly, and managed only to deflect the ball wide. Despite often toiling in midfield, Macario took eight of Stanford's shots but didn't come very close to adding to the 32 she scored this season.

North Carolina's best stretch came in the first 10-minute overtime period, which was played mostly in Stanford's half. Bell dribbled out of her own half and blazed toward the Cardinal goal, but her shot from long-range went straight to goalkeeper Katie Meyer. Rachel Jones shot high and Russo wide. During the second overtime period, Stanford took the upper hand again, aside from a Briana Pinto shot handled easily by Meyer. That 10-minute overtime period included four of Stanford's 14 futile corner kicks, many of which were handled by Dickey.

After 20 minutes of overtime -- when the 38th Women's College Cup final became the first without a goal -- Meyer saved the first spot kick, by North Carolina's Taylor Otto. Dickey kept the Tar Heels in it by thwarting Malatskey. Jones, Dicky, Russo and Lotte Wubben-May hit the net for North Carolina. Macario, Smith, Girma and Kennedy Wesley converted for Stanford. In the sixth round, Meyer saved Tori Hansen's shot, Kiara Pickett  hit the net, and Stanford celebrated its third national titles after wins 2011 and 2017. North Carolina, which won the inaugural NCAA title in 1982 and a total of 21, finished runner-up for the second straight year. 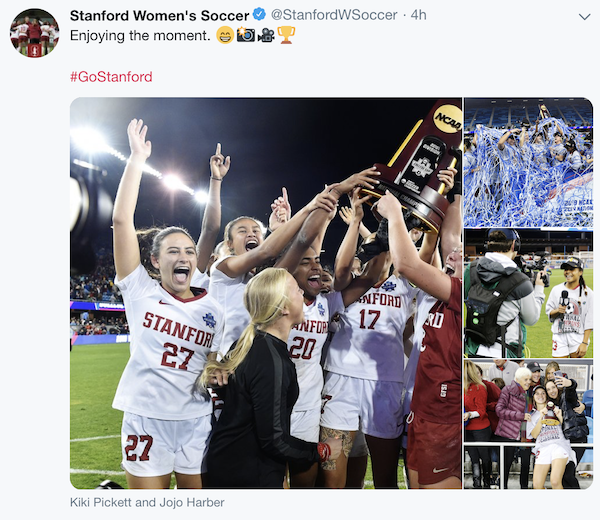 "To tie the game is a wonderful achievement," said Anson Dorrance, who's been at the UNC helm from the beginning. "Of course, I don't pretend for a second that we dominated the game and deserve to have more than that. No we didn't. In fact, in terms of domination and chances, you would have to lean toward Stanford. But it wasn't a loss. They made more penalty kicks than we did. They're national champions and we tied them."

Ratcliffe has been Stanford's head coach since 2003 and has now taken Cardinal to the final four eight times, with three runner-up finishes to go with the three titles.

In 2017, Stanford's men also won, the only time that the same college won both the men's and women's DI titles. That could happen again, because the Stanford men are headed to the Men's College Cup in Cary, North Carolina.