Five MLS teams will kick off 2020 on the week of Feb. 18-20, a week and a half before the scheduled start of the 2020 MLS regular season, when they face regional opposition in the 2020 Concacaf Champions League.

All five MLS entrants -- four from the United States and one from Canada -- have again been separated for the first round. 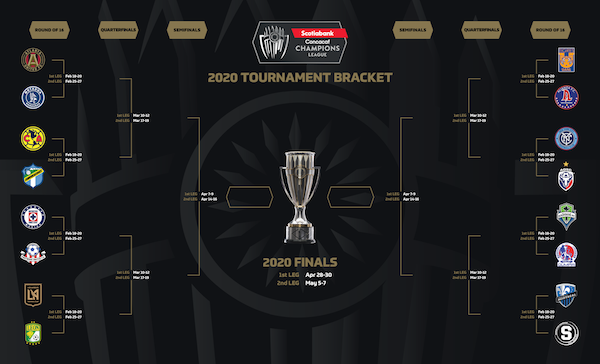 In 2019, four of the five teams advanced, including Sporting KC, a 5-0 winner over Mexico's Toluca on aggregate. The only loser was Toronto FC, which fell to tiny Panamanian club CA Independiente.

In 2020, three of the five MLS entrants -- Atlanta United, NYCFC and the Seattle Sounders -- should be favored while the other two series involving MLS teams will be toss-ups.

LAFC was drawn with Mexico's Leon, the lone unseeded Liga MX team, and the Montreal Impact under new head coach Thierry Henry will face Costa Rica's Saprissa, whose record against MLS teams in the Concacaf Champions League is 6-3-3.

Here's a look at the five MLS opponents ...

Leon (LAFC).
Leon was the only Mexican team in pot two, setting up the lone clash of MLS and Liga MX teams in the first round ...  Las Esmeraldas qualified as the runner-ups in the 2019 Torneo Clausura ... In its only previous appearance in the Concacaf Champions League, Leon failed to get out of the group stage in 2014, finishing second behind Costa Rica's Herediano.

San Carlos (NYCFC).
San Carlos won its first Costa Rican league title in 2019, a year after winning promotion to the top flight ... Los Toros del Norte are the northern-most team to ever win the Costa Rican championship ... They are one of four first-time entrants in the Concacaf Champions League, along with MLS's LAFC and NYCFC and Jamaica's Portmore United.

Players to watch: Jairo Arrieta, 36, spent five seasons in MLS with three different clubs. He was San Carlos' second-leading scorer this fall behind another MLS veteran, Alvaro Saborio, who retired after San Carlos lost in the Apertura semifinals to Saprissa. In goal is 37-year-old Patrick Pemberton, Costa Rica's backup keeper at the 2010 and 2014 World Cups.

Saprissa (Montreal Impact).
Saprissa qualified as the winner of the Concacaf League ... It is Costa Rica's most successful club with 34 league titles ... Los Morados won the old Concacaf Champions Cup three times, most recently in 2003.