Blowing the Whistle: The Psychology of Football Refereeing by Stuart Carrington, (Dark River)


The Social Ref: How to Become a Better Referee and Umpire by Shawn D. Madden, (independently published) 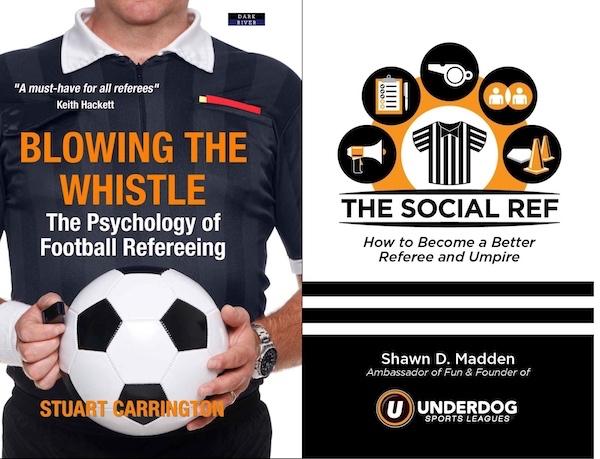 Within their own social circle, referees are nerds. We love to discuss seven different ways to interpret the more obscure clauses of the Laws of the Game, to enthuse about our favorite jersey designs, and to compare notes on which brand of whistle we blow. We have a story for almost every game we ever officiated, and in most of those stories we come out on top (the stories where we don't remain untold). Wayward players, loudmouthed coaches and gesticulating spectators all have one thing in common -- they do not know as much as we do. It's the self-belief that keeps us going.

Arrogance, some might call it. In London-based Sports Coaching Science lecturer Stuart Carrington's excellent book Blowing the Whistle: The Psychology of Football Refereeing, we hear that arrogance is not necessarily a bad quality in a referee. The writer believes that ego-oriented referees (who harbor an "obsessive passion" for the game) are no better or worse than task-oriented referees (who foster a "harmonious passion" more associated with examining our own errors). Ideally, the best referee will consist of a mixture of the two, combining self-reflection with self-confidence.

Not that there is an ideal type of person who is suited to being a referee. "Interestingly," he notes, "not only is each referee different, but the same referee may be different one game to the next." The nuances of human personality are among several other factors carefully considered in this study of why soccer is losing so many referees, why verbal and physical abuse of game officials is on the rise, and what we can do about it.

The book is packed with advice based on the author's research, both empirical and anecdotal. Much of his analysis and counsel may seem obvious, but that does not make this book any less worth your time. The reader is guided through mental preparation before, during and after a game, for example, and much of it will be self-evident if you've experienced several years out on the field. Yet as several amateur referees testify, none of this advice is offered on training courses, or during the early years on the job -- exactly when it's most needed. This is when most young referees quit because they are not yet equipped to cope with the pressure that comes from agitated, over-motivated players, coaches and fans.

The author also looks at "the art rather than the science of refereeing," otherwise known as game management. It takes into account not just the emotions of the players, but the emotions of the referee. We are not rule-dictating robots, we are also influenced -- whether we know it or not -- by varying forms of bias. Perhaps it's the noise of the home crowd, or the fact that we know some players on one of the teams (I know this is true, because a fellow referee, who was also a player, once chastised me for not having shown him a yellow card during a game -- "I deserved it," he said afterward). How a referee learns to regulate his or her emotions could be, according to Carrington, the ultimate influence on their performance.

Carrington concludes an absorbing read by calling on the English Football Association to introduce psychological skills training, and to pay much closer attention to the mental health of referees. Other suggested measures include the continued adjustment of the game's rules to the benefit of officials, better media awareness of the existing rules (they often tweet inaccurate judgments on refereeing decisions that incite ugly online vilification), a more concerted renewal of the 'Respect' campaign, and at all levels of the game a "shift in philosophy -- away from medals and toward well-being".

Shawn D. Madden's self-published tome The Social Ref covers a lot of similar ground, although it is primarily aimed at rec referees in baseball, (American) football and softball. Madden is the founder of Underdog Sports Leagues in the Pacific Northwest, which offers, according to its website, "laid back [co-rec] sports leagues for everyday players that are safe, fair and fun." Although soccer is mentioned only in passing, this book contains a parcel of valuable advice not only to refs just starting out, but also to those who've been around for much longer. An example close to home -- in my decade of refereeing, I've been prone to using (attempted) wit and sarcasm as a coping mechanism in heated situations. After reading Madden's advice on verbal retorts, I found myself seriously re-thinking some of my saltier stock responses.

As a soccer referee, I only half-agree with Madden's directive to read the rule book once and then throw it away. My own advice would be to read the rule book, several times if necessary, but learn when to apply it and when to be more flexible. However, it's likely that FIFA's rules differ significantly in tone and content to those of the Portland Over 40s Rec Softball League, so I'll give the author a free pass on this. He deserves it for his genial and articulate style that make this an accessible, well-presented, self-aware and very useful contribution to the body of literature on what it takes to be a competent, well-adjusted amateur referee.