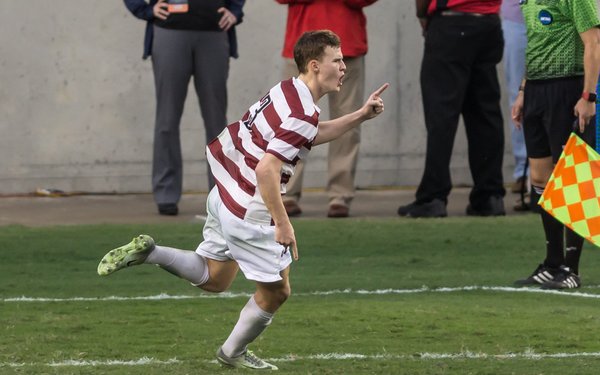 The Men's College Cup returns to Cary, North Carolina, for the fifth time when Stanford faces Georgetown in the first game and ACC rivals Virginia and Wake Forest meet in the nightcap.

The last two of Virginia's seven national championships came in Cary in 2009 and 2014 -- both in shootouts after scoreless draws -- and Wake captured its only title at WakeMed Soccer Park in 2007.

The college game doesn't have star power it might have had in the past, but the four College Cup teams feature 10 All-Americans.

Here are the players to watch at this weekend's final four.

Tanner Beason (Stanford). The senior from Winston-Salem, North Carolina, is only the fourth Cardinal, after Jordan Morris, Brandon Vincent and Tomas Hilliard-Arce, to be named a two-time first-team All-American. The center back started the first 76 matches of his career, then was injured and missed 10 games in the middle of the 2019 season.

Joe Bell (Virginia). Bell scored twice, including the golden goal off his own missed penalty kick, to give the Cavaliers a 3-2 win over SMU in the quarterfinals. Bell had been five-for-five on penalty kicks in 2019 until his miss. The junior has started 56 of 58 games for Virginia, missing only two games in November when he was called up for the first time by New Zealand's senior national team.

Daryl Dike (Virginia). The sophomore from Edmond, Oklahoma, leads the Cavaliers in goals (7), assists (8) and points (22). On top of that, he has drawn fouls that led directly to seven goals, including two in the 3-2 quarterfinal win over SMU. His older brother, Bright Dike, played five seasons in MLS and earned two caps for Nigeria.

Derek Dodson (Georgetown). The junior scored the winning goal in the 2-1 win over Washington in the quarterfinals to give him 10 goals in 2019 and 29 in three seasons. He is a product of Chicago's Sockers FC for which he scored 24 goals in 25 games in his final season in the Development Academy.

Henry Kessler (Virginia). The 6-foot-4 center back has played every minute of every game and anchors the UVa defense, the nation's top defense with a goals-against average of only 0.40. He was the MVP of the ACC Tournament, where the Cavaliers beat Wake Forest, their opponent on Friday, 1-0, in the semifinals. He graduated from high school in two years and attended Bard College before enrolling at UVa.

Bruno Lapa (Wake Forest). The senior leads the Demon Deacons with nine goals -- including six game-winners -- and six assists. Like Andre Shinyashiki  the 2019 MLS Rookie of the Year with Colorado, Lapa came from Brazil to attend Montverde Academy, the Florida boarding school.

Jacob Montes (Georgetown). Montes' stock has been rising in the NCAA Tournament, where he has three goals and three assists in three games, including goals on free kicks against Louisville and Washington. He grew up in Florida but moved to Oregon for his senior year of high school to enroll in the Portland Timbers Academy.

Dylan Nealis (Georgetown). The senior is an attacking threat from his position at right back with four goals -- two in the 5-0 win over Pitt to open the NCAA Tournament -- and five assists in 2019. He comes from a soccer-playing family in Massapequa, New York. One brother, Sean, made his debut with New York Red Bulls in 2019 while another brother, Jimmy, was drafted by the Houston Dynamo.

Colin Shutler (Virginia). Shutler has also played every minute in goal for the Cavaliers this season and recorded 15 shutouts, the most in the country. He won the starting job in goal in 2018, playing every minute in the first 15 games before being injured and missing the NCAA Tournament.

Andrew Thomas (Stanford). The sophomore has already won three shootouts in two seasons in the NCAA Tournament, stopping four penalty kicks against St. Mary's last season, four against Seattle U in this year's second round and two against Clemson in the Cardinal's quarterfinal win. Thomas hails from London but is eligible to play internationally for the USA, South Africa and England. He played cricket at the youth level for England and was called into the U.S. national team camp in Annapolis in May.