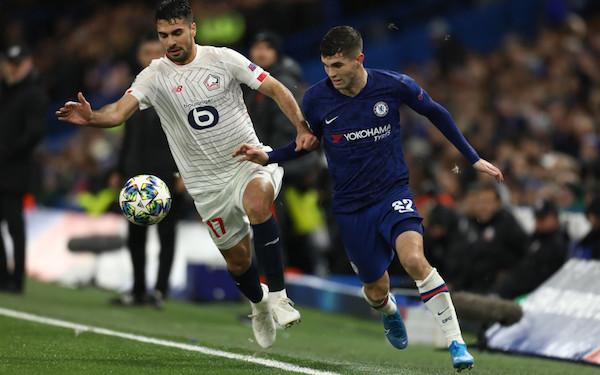 After carrying Chelsea's anemic attack for much of the last month and helping it clinch a berth in the UEFA Champions League knockout stage, Christian Pulisic struggled and was subbed off in the second half of Chelsea's 1-0 loss to Bournemouth on Saturday afternoon.

Pulisic wasn't the worst player on the field, but his performance was symbolic of Frank Lampard's young team that has hit a wall after a fast start to the 2019-20 season under its first-year manager.

The game was Pulisic's eighth straight start in Chelsea's run of eight games in 23 days since the November FIFA break, perhaps the most intense stretch of games in his career that began at Borussia Dortmund.

After Wednesday's win over Lille, the Guardian termed Pulisic's performance a "high-speed game of hide-and-seek [that] is making him a Chelsea idol."

Lampard took Pulisic off after the 62nd minute against Lille, the longest breather in Chelsea's run since the November break when Pulisic skipped the USA's matches against Canada and Cuba to rehab a hip injury.

Lampard has praised Pulisic's ability to get into dangerous positions -- and now wants him to take better advantage of them.

"I think he gets himself in so many good positions with his talent and his dribbling ability that I think more goals will be the next stage of that," the Chelsea manager said before the Bournemouth game. "I am really pleased with him. I have asked a lot of him. He has played a lot of games recently, back to back, in a new league that we know is very physical for him. I am asking a lot but he has done very well. I expect a lot more."

Pulisic, whose five Premier League goals came in a span of three games before the November break, isn't the only young Chelsea player who has struggled to score recently. Tammy Abraham and Mason Mount have scored 16 Premier League goals between them this season but only two in the last six games.

Despite Chelsea's recent slump, it is still in fourth place with a four-point edge on fifth-place Sheffield United and five-point advantage on Manchester United and Wolves, which both have a game in hand.

The Blues' schedule doesn't get any easier. Their festive fixtures include five games over 15 days with London derbies at Tottenham and Arsenal a week apart.

Chelsea fans showed their displeasure with the second straight 1-0 loss at home to a team the Blues should have beaten.

"I don’t blame the fans," said Lampard. "I’m a Chelsea man, and I will be the first one to say the fans were flat today and we needed them. I would be the first, but today I’m never going to say that because if I’m a fan sitting there today, I’d also say, ‘Pfft, too slow. Center back to center back, fullback to fullback, back to center back, back to fullback and I don’t want to come and see that.'"

Lampard, who hinted at lineup changes for the Spurs match, added that it will be up his players to take the initiative.

"I won’t blame the fans," he said. "They come here to support the team, they will come to Tottenham next week, they will come to Southampton on Boxing Day and some responsibility is on the players to excite them, to have the personality and the balls to take the ball in an area and beat someone or play forwards."