They Don't Teach This by Eniola Aluko, (Yellow Jersey)
The National Team: The Inside Story of the Women Who Changed Soccer (updated) by Caitlin Murray, (Abrams Press) 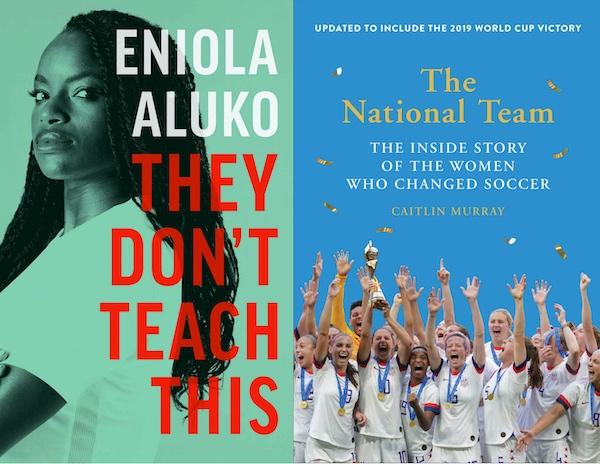 There's a heart-breaking passage early on in the autobiography of the Nigerian-born British striker Eni Aluko, when she describes how she temporarily gave up soccer at the age of 9. Excelling as the only girl on her school team during an indoor tournament, she cannot understand why the goals that she scores are greeted with anger from the sidelines. She sees the furious faces of "red-faced men" telling her that she shouldn't be playing, that she doesn't belong in this arena. She doesn't understand why they are railing against her, but it's enough to sap her of all motivation.

This is a rare example from Aluko's life when she doesn't resist, when she doesn't fight back. The rest of this book portrays her struggle to be heard, to be noticed, and to be celebrated for her achievements. It's the flagship story of a woman fighting to be successful in parallel, male-dominated realms -- both as a professional soccer player and as a lawyer. She gets by with more than a little help from her mother, and her faith -- both in God, and in herself.

Would I recommend that you read the whole book? Certainly as a gift for a young and ambitious female athlete, even if the references to God become overbearing after a while. For every pertinent observation along the lines of, "As a black woman, I've spent my whole life learning how to break free of the limitations others impose upon me," there's an irritating homily such as, "As I got older, I began to understand I owed my skills to a higher power." She writes, "To all women, and to black women especially, I want to remind you that education will set you free." Yet such self-empowerment falls paradoxically by the wayside when she claims that the all-knowing, always male God controls all our fates, and that there's nothing we can do about it. "Whatever happens, God has already allowed it to happen." Right.

If you can ignore such contradictions, the book really kicks off in chapter 15 when Aluko takes on the English Football Association (FA), a man-powered bastion of chauvinism, complacency and mediocre management for the past 150 years. After a storied career in the English national team, Aluko feels herself being edged out by new coach Mark Sampson, and begins to document incidents of racism and bullying from Sampson and his coaching staff. After providing supposedly anonymous feedback on the team's unhealthy culture in response to an FA survey, she finds herself dropped from the roster two weeks later. The fight for justice has only just begun, though, and Aluko thankfully never loses sight of that goal.

Reading Caitlin Murray's The National Team right after reading Aluko's account, you can't help but see the obvious connections. It's the same story of women and women's soccer not being taken seriously, up against the familiar wall of obstructive, inept and myopic leadership -- this time at the U.S. Soccer Federation. It's an equally inspiring read, while its pacey mixture of on-field action and off-field politics has you cheering and swearing right through to the end of the 2019 World Cup. There are very few soccer books where you reach the final page and genuinely want to read more.

The book's backbone lies in its multitude of combative voices, from Julie Foudy through Megan Rapinoe. "We didn't trust anything U.S. Soccer did," says Foudy in one of the early chapters. "We didn't trust they had our best interests in mind. Everything we fought for, we had to scrape and claw for." The story of the U.S. women's national team is built around an iron-willed determination, group solidarity, diligent organization, hard work, a handful of bitter setbacks and internal disputes, and of course glorious triumphs at numerous major tournaments.

Murray concludes that women's soccer in the USA is not just a rallying example to all women's sports, but that "the culture of the team -- the fighting mentality of its DNA -- has outlasted every player, every coach, every presidential administration, every World Cup, every Olympics, every collective bargaining agreement, and every battle." The almost Hollywood-like linear narrative of women's soccer in the United States has prompted the engrossing, motivating book that the sport fully deserves. Five stars.

Soccer Books of the Year, Part 2: How to be a Better Referee