The Time it Takes: Beau Dure's 'Reality Check' delivers a provocative and balanced primer to soccer's story in the USA

The intelligent effort and fighting spirit that changed the USA’s mind about soccer and led it to the cusp of becoming a major American sport met these goals with impressive speed.

Americans began playing soccer near the time of the Civil War, yet in 1970, essentially zero kids knew the game. From the earliest games to the present, soccer was embraced and resisted, as reasons inherent in the game, American culture, and turn of the century society complicated and lengthened the sport’s struggle to become integral in American life.

American soccer today is a multi-billion dollar sports market and culture, still emerging – tens of millions have grown up playing, American men have qualified for seven of eight World Cups since 1990, American women are eight-time world champions (World Cups and Olympics) since 1991, and pro soccer is being woven into the fabric of communities all across the country.

Not unlike August 1990, American soccer again faces transition so common in the game itself -- a broken moment when our task is to reclaim play, bringing it back into what harmony and rhythm the team’s effort generates and combined talents allow. So goes one accurate story whose drama now concerns whether we can mature to achieve and sustain excellent quality of play and excellent quality of experience for all.

Yet how many remain skeptical, and how many are deeply troubled by various dissonances?

Many grievances are trending today, advanced in takes plausibly predicated on discernible evidence. The men’s national team’s failure to qualify for Russia 2018, for instance, is supposed to mean we can no longer ignore signals flashing ‘something’s rotten in the state of American soccer.’ The game’s cost, uneven access, frequently poor experience, and just OK quality rightly claim attention, while the absence of clear and obvious solutions leave many of the game’s most devoted people in despair for our situation. As 2020 dawns, most soccer pundits openly suggest the sport’s national leaders and organizations are incompetent, corrupt, or both, and we’re witnessing a converging media campaign to compel a confrontation or at least more considered communication about these and other key concerns.

And then there are soccer’s angry Americans, most virulently risible and visible on social media – their emotional investment seems now to tilt much soccer writing and podcasting toward a viral ecology bizarrely resistant to practices informed by and generating healthy culture. What to make of this ideology distilling into dogma?

Then again to speak in person with such online and sometimes real-world revolutionaries is to experience genuine love for our game and sport, to hear the meaning it gives, and, on the whole, to recognize authentic goodwill and good faith. So many invest themselves daily in their communities, and what distance they feel mostly reflects local challenges more effectively met with resources that, today, have yet to be generated. For those matters requiring institutional action regarding decision-making and policy, what trust remains fades farther with each moment their concerns are not reflected in the words of organizational leaders and spokespeople.

So where does this leave us? 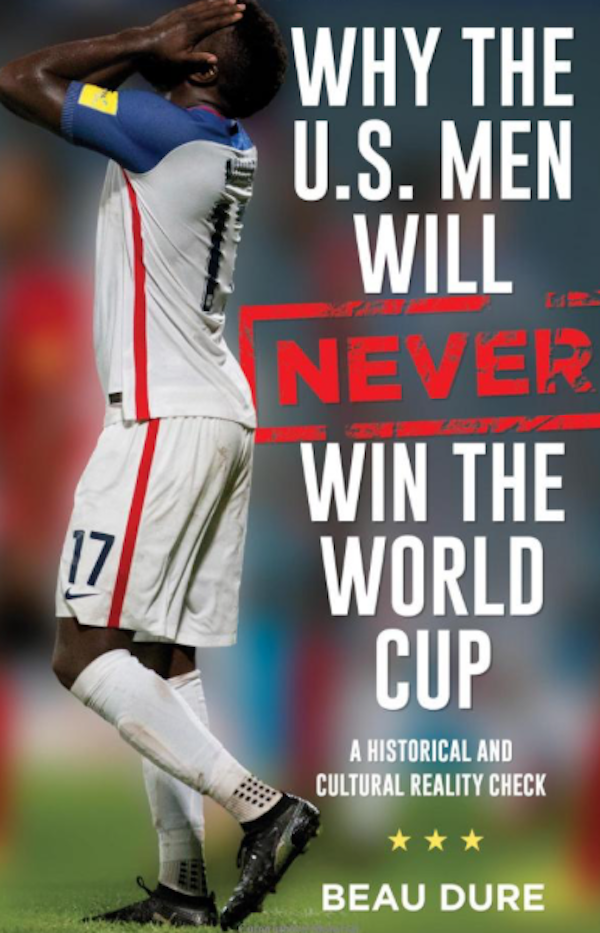 Journalist and historian Beau Dure’s provocative and balanced primer to soccer’s story in the USA offers helpful orientation, calmly reminding us we have much to celebrate, much to lament, and much to resist as our story unfolds through this transition moment.

Dure is familiar to Soccer America readers and to those who have paid attention to the game over the past two decades as one who helps us see things as they are, not as we wish them to be. You can count on his sober, reasonable and often bold analysis to reflect relevant, finely researched information, much of which you will not find elsewhere. Such is his honest effort that, as the U.S. women’s national team’s lawsuit has proceeded to near universal public acclaim and support, Dure checks facts promoted by plaintiff and defendant alike, painstakingly compiling financial data and creating pay analyses so fans and media can compare variously calculated claims.

For those expecting more of Dure’s courageous independence, Why the U.S. Men Will Never Win the World Cup will not disappoint. He pays off his promise to educate and inform in fun spirit “despite the depressing premise,” presenting valuable historical information and reasonable perspective, leavened with sometimes illuminating, sometimes curious analogies and pop culture references. The effect builds his argument while keeping the pages turning, a skillful aid for casual fans, those more familiar with the game, and all who are eager for introduction to American soccer history and knowing awareness of matters beyond the field. Those seeking even-handed coverage of significant matters affecting the health of the sport will find a knowledgeable aggregation of journalism and media opinion. Trigger warning: pro/rel advocates’ unexceptional arguments – though not the pro/rel concept – take a fair beating.

Across nine chapters, Dure scans American soccer history for information and themes that illuminate the present. The title may aim to catch attention, though he tethers his 196-page argument more tightly to his subtitle: A Historical and Cultural Reality Check. Each chapter names “a reason why the U.S. men won’t win the Cup” – “we play too many other sports, watch too many other leagues, are too insecure in our soccer identities, can’t agree on anything, can’t stop suing each other, fell behind major soccer nations by 100 years, are obsessed with quick fixes and too serious to succeed at a sport built on joy” – though he’ll “be perfectly happy to be wrong about” what this all amounts to.

You may suspect Dure’s too smart to avoid qualifying his absolute claim, and he’s coy enough to postpone until his final words the crucial caveat. All efforts to escape the tiresome charade that follows the misbegotten ‘when’ question are joyfully tempting, and what better way to redirect conversation than with simple closure, ‘never,’ evenly spoken? This writer finds Dure’s argument unpersuasive – ‘never’ is not the answer – and his commitment to it doubtful, but this hardly seems the point.

Dure’s reality check matters. Blending his own experiences with reports from soccer journalists, historians, and select academics, he nudges us away from that strange seriousness about who we are not (yet may become), pointing us toward a more relaxed attitude about who truly we are.

Throughout the book and again in his final chapter, Dure helpfully catalogues and addresses our many divisive dispositions and practices, modeling a helpful corrective to a hyper-critical attitude so ingrained in other major American sports, an attitude now increasingly mimicked across countless cottage industry podcasts, blogs, and twitter accounts. More importantly, who can doubt Dure’s concluding insistence that “the biggest enemy to soccer’s progress in the United States ... is us. The U.S. soccer community”?

Here, in recognizing that we in the USA now have our own soccer culture, one thing Dure means, I think, is that we have a shared history: the modern game is now long enough nationally established that a few generations have grown up with it so a collective memory is emerging. This offers a chance to consider where we are by recalling the fact that American soccer had to take a road less traveled.

One addition that would enrich and sharpen the book’s historical and cultural analysis reflects a curious detail about contemporary soccer journalism and historians: how rarely they engage those most directly involved – across all relevant categories – during the crucial period between 1960 and 2000. Taken together, these primary source people will tell you what happened and why – they’ll unfold details of, and in many cases correct, the first draft histories that overlook how the USA learned the game, came to embrace it, and learned to generate the human capital, finances, physical infrastructure, and sporting memory that generated today’s durable platform.

How can it be otherwise than that their knowledge and understanding forms, and informs, vital elements of our culture? Such perspective won’t show ours as the best of all possible worlds, but by diving deeply with those most directly involved in our transformation into a soccer nation, Dure could better illuminate what’s been accomplished in American soccer, how it came to be as it is, and what this means moving forward. Whether they would persuade him it’s just a matter of time before American men win the World Cup is an open question, but he might see even more good reasons we should keep calm and carry on.