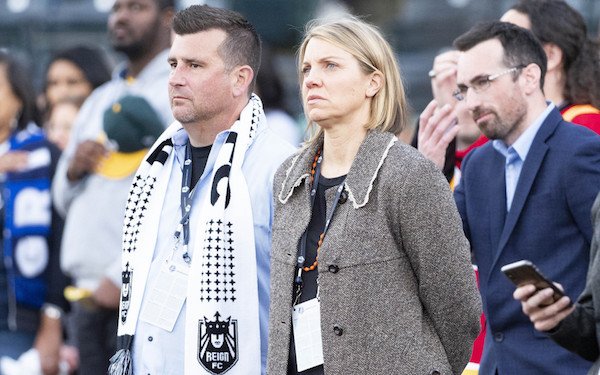 There was good news and bad news for the NWSL on Thursday.

The league confirmed that there will be no move into Sacramento in 2020, no expansion next season. Despite record crowds across the league in the aftermath of another U.S. championship at the Women's World Cup, the league will again have nine teams in 2020, the third year in a row after Boston folded ahead of the 2018 season.

OL Group will hold 89.5 percent of the new Reign FC organization, putting its value at $3.51 million, a modest sum given reports that the new MLS team in Charlotte paid an expansion fee of upwards of $325 million.

Reign FC majority owners Bill and Teresa Predmore will retain 7.5 percent and remain involved as CEO and academy president, respectively, and Frenchman Tony Parker, the former NBA star, will hold 3 percent. Parker, who retired after the end of the 2019 season, is an OL ambassador and is the majority owner of French men's and women's basketball champion ASVEL in which Lyon holds a minority interests.

The bottom line for the Predmores in selling Reign FC was their interest in moving it forward in the NWSL, where the cost of operating a team will go up significantly in 2020 with spending on players (salaries and allocation money) doubling from 2019. Reign FC moved from Seattle to Tacoma to play at Cheney Stadium in 2019 because Memorial Stadium, a high school stadium that housed the Sounders in the 1970s, was no longer a viable option.

“I think this is a big day for Reign FC, the NWSL and women’s professional soccer,” said Bill Predmore. “They are obviously an unbelievable football brand.”

Lyon is a perennial contender on Ligue 1, the French men's pro league, and has the largest budget of any women's team in the world and attracts all the best players, including 2018 Ballon d'Or winner Ada Hegerberg. In 2017, chairman Jean-Michel Aulas sold a minority interest in OL Groupe to Chinese investors. In 2018-19, it reported record revenues of more than $340 million. OL Groupe built the Groupama Stadium, the venue for the 2019 Women's World Cup semifinals and final, and is building a new basketball arena for ASVEL.

Megan Rapinoe, who has played for Reign FC since it started in 2013 and also played parts of two seasons at Lyon, put in perspective what it has meant to have the Predmores as the owners of Reign FC, the 2014 and 2015 NWSL Shield winners, thanking them for their vision and putting up with her.

“I think with anything that is great, or has the desire to be great," she said, "first there needs to be a vision of it, and a belief of it, even if there isn’t anything to look at in your vision. Without you guys and without the vision you had, and the grittiness and tenacity to make it come to life … just how you approached this club was to make it the best club in the world."

The NWSL was launched with eight clubs in 2013, two years after WPS folded and a decade after WUSA, the first women's league, folded. Only one original NWSL club, the Portland Thorns, had backing from a men's pro club.

In 2020, six of the nine teams will have ties to pro clubs -- Portland, Houston, Orlando and Utah in MLS and North Carolina in the USL Championship -- and two others -- Sky Blue FC and Washington -- will have new partnerships with MLS clubs to share their venues.

Of the other seven original teams, three have folded -- Boston, FC Kansas City Western New York -- two have been sold in the last year -- Reign FC and Washington -- and the other two teams have the same owners -- Chicago and Sky Blue FC.