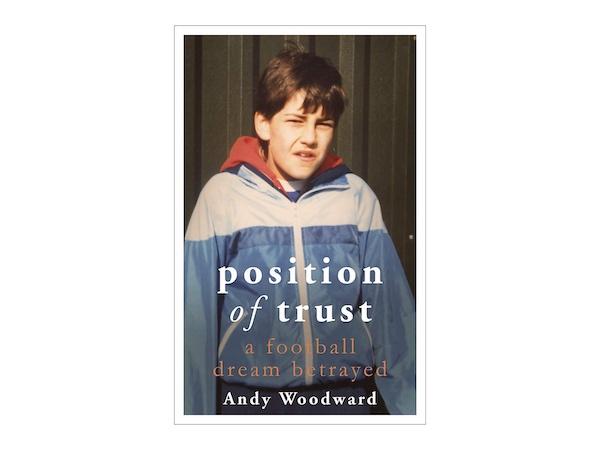 The first 10 years of Andy Woodward's life were just as they should have been for a young lad growing up in northern England during the late 1970s. His extended family was stable, his parents were loving and supportive, school was fun, annual holidays were a treat, and he spent all of his free time playing soccer. He was good too. Good enough to be spotted by a talent scout and youth coach connected with Manchester City and third division Crewe Alexandra, Barry Bennell.

Like Woodward, you spend much of the book looking back at that idyllic first decade and wishing that somehow it could be retrieved. Bennell, now serving jail time for sexually abusing hundreds of young soccer players, stalks the rest of this book like the monster that he is. "Thinking back," writes Woodward in this devastatingly honest memoir, "those first ten years of my life were like my own version of a perfect childhood. All smiles. Just look at the pictures. But all that was finished now. Finished for good."

Just weeks after Woodward joins the coach's youth team, he and another player, Paul, are invited to spend the weekend at Bennell's house. It's a fantastic setup -- there's a pool table, a slot machine, a jukebox, a fish tank, and a room full of soccer gear. The kitchen's filthy, but what does a 10-year-old boy care about that?

Bennell has a pet monkey. They drive around to soccer games. At night they watch explicit horror videos on the sofa. Bennell puts his arms around the boys to comfort them and invites them to share his bed because they're scared. The sexual abuse starts almost immediately, and in Woodward's case lasts for the next six years. During this period he is raped hundreds of times, but is too terrified and wracked with guilt to utter a word. He and Paul never talk to each other about what they experience every weekend in Bennell's hell-house.

Woodward's parents suspect nothing, having been charmed by Bennell from the start. "Some people have that gift for talking to people," Woodward observes. "Bennell had it: he'd seem so warm; softly spoken and gentle, making the person he was talking to feel as if they were special." It's not just the young player and his parents that Bennell grooms. He also impregnates Woodward's younger sister, Lynda, and then marries her. Woodward is too full of shame to say anything, because that's what he's felt from the second his coach first lays hands on him: "I was a victim from that moment onwards. And, for all victims, shame is the poison that seeps into the rest of your life."

Why does Woodward say nothing to his parents? "Me being happy - seeming to be happy - was the most important thing in the world for them. That just made it more unlikely that I'd ever say anything that was going on or give them any reason to suspect that things weren't what they appeared to be." Only being out on the soccer field is a partial escape from Bennell's manipulative use of "fear, excitement, flattery." Even then, there's a connection - the one and only time he manages to reject Bennell's advances, he is immediately dropped from the team for the following day's game.

As he grows up, Woodward is good enough to train with Crewe Alexandra's first team. The adult players make knowing remarks in the locker room about Woodward being one of "Bennell's bum-boys." Many of them had come through the same system, and would have been subject to the same abuse. So, people obviously knew -- within the club, and within the game. Some boys left the youth team without explanation. The author wonders if they said something to their parents. But those parents never spoke up either.

"When the abuse stopped, maybe you'd imagine all the rest of it stopped too," writes Woodward of the time he became too old for Bennell's enjoyment and exploitation. "The reality, though, is that once Bennell was in your head, he was in there for ever. Like a stain that had spilt on to your soul." Woodward's career suffers through his susceptibility to panic attacks, and the medication he takes for anxiety and depression. He drinks too much, and makes his way through four marriages, incapable of conducting a steady relationship (although his five sons offer solace and a barrier to suicide). While he never absolves himself from his own bad decisions during his adult life, he's always looking for confirmation from any woman who pays him attention that he's not gay, that he's "normal."

When repeatedly pressed by police officers investigating Bennell, Woodward finally speaks for the first time about his abuse. By then he's in his mid-20s. It doesn't mean closure, not by a long way (there's no follow-up counseling), but it's the first of several hard steps on his way to dealing with the horrific trauma perpetrated by a man who should never have come within 10 miles of a soccer field. All of those steps involve talking about what happened.

"I needed a key," he explains. "And I found it when I realized what it was in me that had made the darkness fall; that had made things happen that shouldn't happen to anyone happen to me. What had locked me up was silence: my silence. And the silence of others... I found a voice. A voice I could use to speak up for myself and, maybe, to speak for others."

Anyone involved in youth sports, schools or church organizations should read this brave, distressing and indispensable book. It's arguably the most important soccer book that's ever been written, because if it ensures the safety of only one vulnerable child, or aids the recovery of a single victim, then its publication will have been worth every drop of ink, every painful self-examination of Woodward's damaged soul. It will move you, it may even depress you, but you won't stop reading, and you'll be thankful that you took the time to accompany the writer on his courageous struggle to find himself. Never mind the celebrity player hagiographies: this is the soccer book of the decade.

Soccer Books of the Year, Part 2: How to be a Better Referee