The sport that unites: Soccer Without Borders makes young newcomers to the USA feel at home

Three pairs of jeans, five T-shirts and a pair of All-Star sneakers. That’s all Yajaira Lilibeth Alvarenga Flores  packed when she moved to Boston from a small town in northern El Salvador in 2014 when she was 13 years old. Bubbly and eager to talk, Yajaira (pronounced Ja-Hai-Ra) prefers to keep the details to herself. But she does say it was a matter of life and death. “They were threatening us,” she says. “If we had stayed, we would've gotten killed, for sure.” 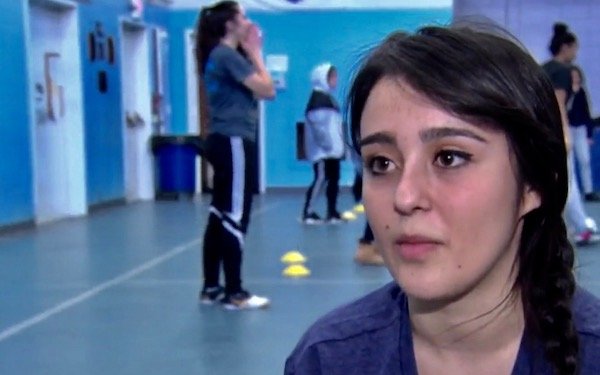 There are more than two million Salvadorans living in the United States. Upwards of one million Salvadorans fled after the 1980-1992 civil war that pitted a USA-backed federal government against left-wing guerrilla groups. The country never truly recovered. In the last decade, there was another surge in Salvadorans whose migration was attributed to gang-related violence. Within three years of Yajaira’s arrival to the United States, an estimated 20,000 people in El Salvador had died from gang warfare.

Yajaira is a first-year student at Northeastern University, and her experiences betray her 18 years. She had never spoken English before moving to Boston, but within a few years, Yajaira was excelling in her classes and playing soccer at Fenway High School, an inner-city school with a welcoming Latino-diaspora community.

Central to acclimating to American life was Soccer Without Borders, a non-profit that promotes social change through soccer. If anything else, it provided a taste of home.

“Soccer, for me, means life and passion," she says. "It's a feeling that I cannot really fully explain because it's more than you can imagine. Soccer Without Borders is a community where I can fit in and have that support as a student, athlete and professional.”

Soccer Without Borders was brainchild of founder Ben Gucciardi, who in 2007 organized a soccer camp for the refugee community in Oakland, California, that rapidly attracted an increasing number of kids from the immigrant community. He teamed up with Massachusetts-based Mary McVeigh Connor, who now serves Executive Director. In addition to Oakland and Boston, Soccer Without Borders has programs in Baltimore, Greeley, Colorado, and Seattle -- serving newcomer children from more than 60 nations. The program is unique in that, in addition to providing after-school activity, it fields teams in youth and high school leagues. In 2017, SWB received the FIFA Diversity Award. In 2015, Gucciardi was honored as a White House Champion of Change.

A Soccer Without Borders-Oakland team, with players who hail from nine nations.

SWB Boston director Preston Hollis joined the Boston program in 2015. Now staffed by five paid employees and helped by dozens of volunteers, the Boston program serves hundreds of boys and girls high school-age and below every year.

“We went from a drop-in program to a more robust program that had practices and participated in a youth soccer league,” says Preston. “And we started creating more opportunities for our participants, like team building activities and experiences outside of East Boston that might otherwise be difficult for them to have.”

SWB Boston’s participants are mostly newcomers — an umbrella term for asylum seekers, refugees and immigrants. SWB seeks to ease the daunting cultural transition that many newcomers experience upon arrival, and there’s no better sport to use as a vehicle for that than soccer.

Yajaira remembers her hometown of La Reina surrounded by trailed hills, wandering cats and dogs, and most memorably, soccer fields. Her dad, Wilber, taught her how to kick a ball when she was 5. Yajaira calls the league her dad plays in papi futbol — daddy soccer. He’s 55, but he still plays, Yajaira says with a hint of pride. Yajaira has played defense, like her father, ever since she was picked for her school team in fourth grade. 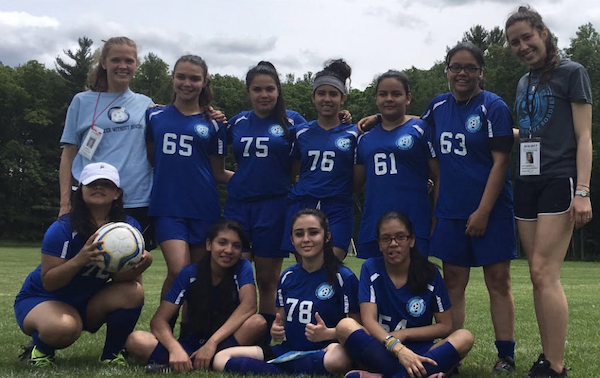 Wilber is a prominent force in Yajaira’s life both at home and at school. After teaching at the only school in town since at least 1990, he was promoted to deputy director in 1999. And it was in his office that Yajaira learned she was moving to Boston.

It was July 23rd, a day before her 13th birthday. Her dad called her into his office at school. He had the paperwork that made immigration possible in a letter.

“I opened the letter and I read everything,” she says. “That's when I learned I was going.”

Because of the danger Yajaira was in, she only had a few days to leave.

“I didn’t realize I was going to live [in the USA],” she says. “It was very hard to just realize that you will leave everything. And to just have hours to say goodbye, to give a hug to whoever person you want to.”

She left with her mother on her birthday, July 24th. Yajaira was excited for a new adventure. Her uncle and cousins who live in Boston had always sent her All-Star sneakers and now, she could thank him in person.

But it became apparent she would have to learn English — fast. “My cousins would take me out to Dunkin Donuts and they would make me order coffee,” she says. “I still remember that. They told me, 'Order the frozen coffee with caramel, that's how you're going to learn.'" At Fenway High School, her English steadily improved. Fenway is home to a vibrant Latino-diaspora community, and Yajaira had no idea a place like that existed — where everyone there came from somewhere else.

“Even my teachers who were American were speaking Spanish,” she says. Yajaira was on the speech and debate team, ran track and field and played for the soccer team. One spring day in her sophomore year, her friend Jessica told her she was going to an event called “Soccer Without Borders.” 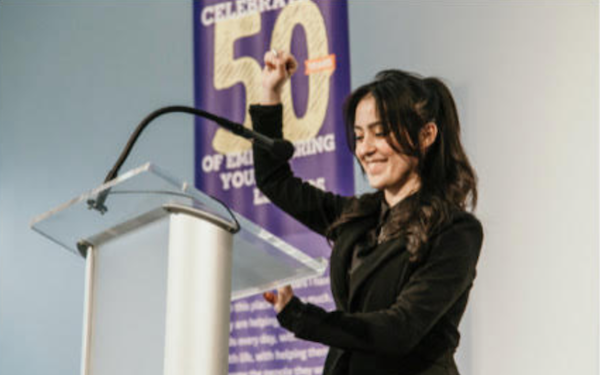 Preston remembers when CBS Boston was interviewing Yajaira for a story about Soccer Without Borders at a practice.

“With all of our participants we see great potential, but there was something about Yajaira,” Preston says. “She was quite precocious, charismatic, and open in a way that most of our participants take a while to get to. What stood out to me more than anything was her genuine and passionate desire to make the world a better place.”

“She was always stepping up in a very fearless way,” Preston recalls, “participating and encouraging others in a way that was rooted in positivity and in the strength of her teammates.”

“Since I came to the United States I always said that I wanted to become an example for my community,” she says. “Coaching the younger generations doesn't stop to amaze me. Helping them develop at every practice or game — I have seen tears of joy, smiles every time, and that pushes me to continue working because it’s something that I personally look for.” 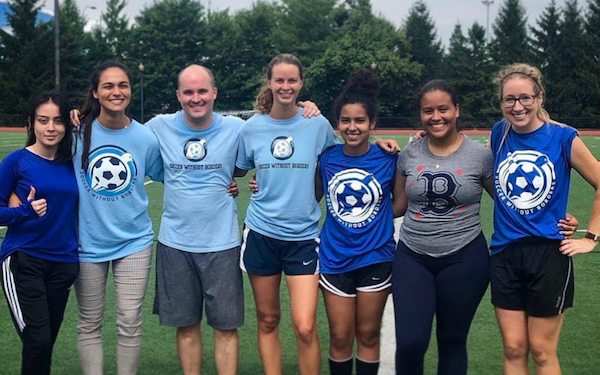 Yajaira with her fellow Soccer Without Borders-Boston coaches.

As a coach, she worked with other girls who reflected her own story, passing on the lessons she learned through soccer. Though she has yet to declare a major at Northeastern, she says she wants to go into criminal justice because of the experiences that forced her to leave La Reina. One of her three jobs she works to pay for school is at SWB, where she’s a family outreach and engagement coordinator. She enjoys the work, knowing how important uniting people on a soccer field can be for brown boys and girls, in new countries, who feel left out.

“With SWB, I can send my message to a lot of people, and I also can see my own potential,” she says. “I really want to continue developing myself, and teach the younger generation that language is not a barrier if you want to achieve a dream.”

7 comments about "The sport that unites: Soccer Without Borders makes young newcomers to the USA feel at home".
Read more comments >
Next story loading