The EPL puts on a show -- only the referees disappoint

Holiday soccer means, inevitably, the English Premier League. The only top league that elects not to take time off. It means binge-watching, which I’m told is not good for me, while it also provides an opportunity for a concentrated look at the EPL.


Over the past week I’ve watched 8 games more or less through their 90 minutes, and have seen bits and pieces and highlights from about 10 more. My overall verdict is that the EPL has put on a hell of a show.

The level of play and the entertainment value have been consistently high. I didn’t see a really dud game. Four of the games were outstanding.

It has to be said that the refereeing was the weakest part of the show. VAR, that refereeing subsidiary (though how long VAR will remain in a secondary role is anyone’s guess) did rather better.

A good place to start is the Tottenham-Chelsea game. At the end of the first half, a forward pass from Chelsea’s Willian was chased by teammate Marcos Alonso into the Tottenham area. Tottenham goalkeeper Paulo Gazzaniga ran forward and attempted an elaborate side volley, almost a karate kick, to clear the ball. He missed the ball completely, only just failed to kick Alonso’s head, then barreled into him and flattened him. A seriously dangerous maneuver, but one that looked almost comical.

What followed was anything but comical. Referee Anthony Taylor immediately whistled and signaled for a free kick (or was it a goal kick?) for Tottenham. Incredible. Gazzaniga had just committed what TV guru Gary Neville promptly termed “an assault,” which Taylor was completely ignoring. Neville was amazed that VAR was necessary to spot this. 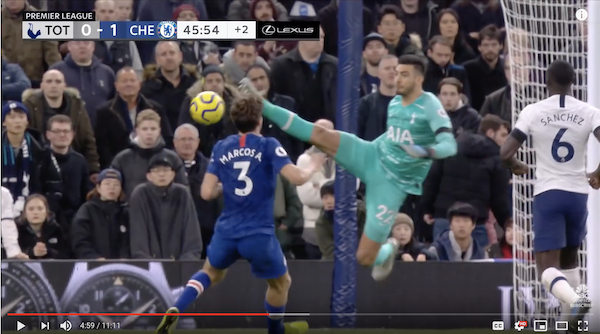 But VAR was necessary. It came on scene rapidly in its best moment. It quickly ruled that Gazzaniga had fouled Alonso, and awarded Chelsea a penalty kick. Even so, Gazzaniga escaped with a yellow card, for what was surely a red-card offense (“endangering the safety of an opponent”).

A few days later it was the goalkeepers in the Wolverhampton-Manchester City game who provided a sensational opening, the likes of which I’ve never seen before. With a mere 10 minutes on the clock, Diogo Jota broke clean through the Man City defense. Keeper Ederson came flying out of his area -- he failed to get the ball, but made contact with Jota, enough to bring him down.

This time the referee, Martin Atkinson, showed the red card at once. No need for VAR. Man City was down to 10 men. Unusual to see a player ejected that early in a game. And even more unusual to see a goalkeeper ejected.

Ten minutes later VAR was at work again, awarding Man City a penalty (correctly) which referee Atkinson had missed. Raheem Sterling took the kick and Wolves’ keeper Rui Patricio saved it brilliantly. As Wolves players congratulated him, VAR intervened again. There had been encroachment by Wolves players. The kick must be taken again.

Up stepped Sterling for a second try. Patricio saved again, but blocked the ball directly back to Sterling, who scored easily. Two great saves, but the unlucky Patricio had given up a goal. It got better for him, though, as Wolves went on to win the game.

On the whole, goalkeepers did not have too cheerful a time in these games. Arsenal’s Bernd Leno came off worst, with a huge error that presented Chelsea’s Jorginho with an easy tap in to score the tying goal. Chelsea’s winning goal followed four minutes later.

Lest I’m leaving an impression of disrespecting goalkeepers, I should mention a very good save by Man U’s David De Gea, and a superb save by Watford’s Ben Foster, the sort of breath-taking athletic moves that -- obviously -- only goalkeepers can employ. Soccer would be a poorer game without them.

But there is this ongoing problem of goalkeepers barging into -- jumping into -- other players. Ederson did it and got red-carded (not for the violent play, but for denying an obvious goalscoring opportunity to Wolves). Gazzaniga did it and got only a yellow. While Southampton’s Alex McCarthy did it and received no punishment at all. 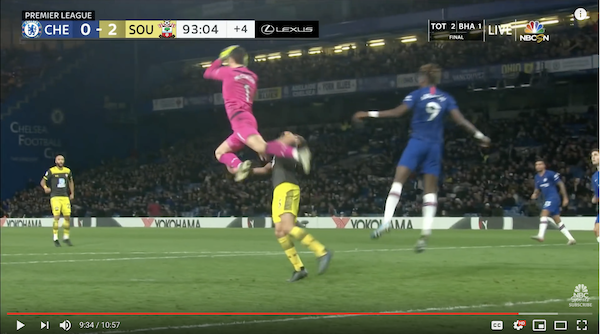 That last incident, from the Chelsea-Southampton game, is worth pondering. Chelsea’s Fikayo Tomori played a long high ball into the Southampton goalmouth. McCarthy ran out of his goal to meet it, jumped high, right knee raised, into a couple of players, hitting one of them with his thigh and leaving him on the ground, holding his head.

The intriguing thing is that the injured player was a Southampton teammate of McCarthy, defender Jack Stephens. Referee Jonathan Moss quickly blew his whistle -- but of course, given that referees are not obliged to identify their calls, indeed have no generally accepted set of signals to do so, it was not clear what he had called. More than likely it was because of a possible head injury.

Yet it seems to me that McCarthy had committed a foul against his own player, by “playing in a dangerous manner.” This is one of the very few occasions when the rules do not specify that the victim of player violence has to be an opponent. The wording here is: “any action that, while trying to play the ball, threatens injury to

Referee Moss could -- and in my opinion should -- have penalized McCarthy for playing in a dangerous manner -- which would have meant an indirect free kick for Chelsea in the Southampton area. But if the referee is calling a foul on a teammate, why would he not call McCarthy for “jumping at” Stephens? “Jumping at” (carelessly or recklessly) is clearly identified in Rule 12 as an offense to be punished with a direct free kick -- a penalty kick if within the penalty area. Ah well, such a call, for fouling a teammate, seems to be a non-starter because the rules specify that the jump must be made at “an opponent.”

The above incidents are merely the latest to expose that goalkeepers continue to commit dangerous fouls. They do so regularly because they are allowed to by ignorant refereeing which ignores the existing rules and refuses to punish obvious fouls.

The prime exhibit here is referee Anthony Taylor, who managed to completely ignore a dangerous and spectacularly obvious foul right in front of him. I have not been particularly aware of Taylor as a referee. NBC’s Arlo White says that “he’s an excellent referee.” Maybe. But is it possible to be even a merely good referee while neglecting to apply the rules, while allowing repeated dangerous fouls to go unpunished?

In the chain of responsibility, goalkeepers commit violent fouls because they’re taught that is the thing to do, and the referees allow it. The referees allow it because none of their superiors raises any objections. Those superiors -- ultimately the Rip van Winkles at IFAB (still, apparently, living in the Harald Schumacher era) but also the FIFA Referees Committee -- have it in their power to set things aright by demanding the current rules be enforced, and by rewriting them where necessary to present a new, more practical -- and safer -- definition of just what is legitimate goalkeeper play, and what is not permitted.

referees
11 comments about "The EPL puts on a show -- only the referees disappoint".
Read more comments >
Next story loading