'The Selling of Women's Professional Soccer': Valuable insight delivered by an embedded author

Before reviewing Rachel Allison’s Kicking Center: Gender and the Selling of Women's Professional Soccer, I’ll need to offer a couple of disclaimers: 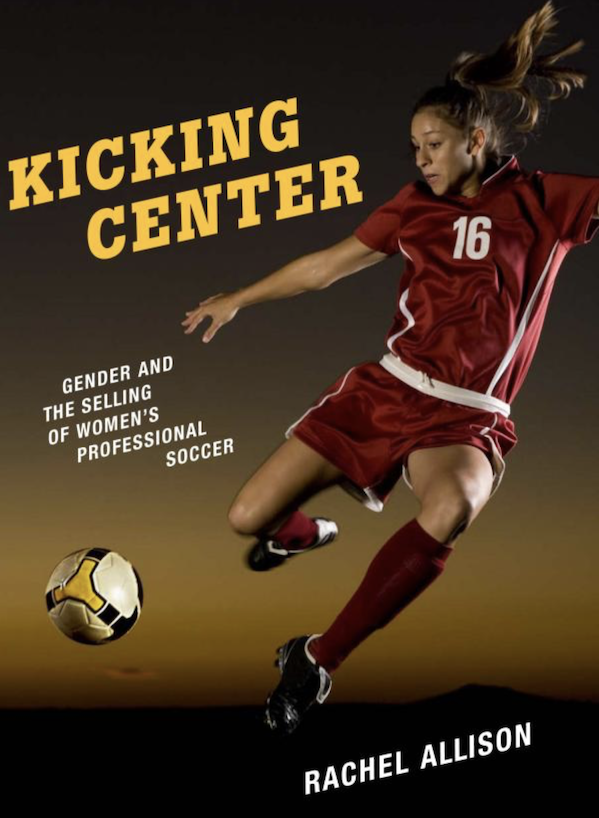 1. This is an academic work. Allison is now an assistant professor of sociology who’s also affiliated with the gender studies program at Mississippi State. You’ll see some words and phrases like “ethnographic” and “transformations to postwar American society,” and an otherwise laudatory review of the book frets that it didn’t pay enough attention to “poststructural feminisms and new materialist feminisms.” That said, it’s certainly an easier read than a lot of the gobbledygook through which I slogged when I got my master’s degree.

2. I am a cis hetero man. At times, this perspective may be helpful, and I think we all have valuable insights to add as long as they’re offered in good faith, but I acknowledge that other people have life experiences that I don’t have.

So to simplify the “yay/nay” aspect of this, I’ll just answer the basic question: “Should I read this if I’m interested in women’s soccer?” The answer is yes. You may also be interested in it if you don’t know Megan Rapinoe from pinot noir (the best rec league team name I’ve ever seen: Rapinoe Noir) but have an interest in gender studies.

It’s interesting in part because of how she did her research. She was embedded with a WPS team as an intern, so she got more access -- and therefore more interesting comments -- than I got in Enduring Spirit, my failed attempt at capturing the Washington Spirit’s debut season. (I still think the book is worth reading, but I lost money on it -- in part because the Spirit players and staff didn’t want to dwell on that season, in part because some people were expecting an expose on how the evil Spirit staff made Ashlyn Harris, Ali Krieger and Marisa Abegg lose games, but in large part because I simply didn’t get the “year in the life” stories I was seeking.)

Which team did she follow? We don’t really know, which is one frustration readers will have with the book.

That’s not Allison’s fault. She simply had to follow academic protocol, and you can’t blame her if that protocol rings false outside the ivory tower. I thought it was silly when I had to jump through hoops to do interviews for my master’s thesis, and I think it’s silly that Allison has to withhold information that any women’s soccer fan can easily piece together anyway. If academics ran news organizations, you’d see this: “Gail, whose real name is not being used here but is a 26-year-old central defender whose college team won a national championship, scored on a corner kick.”

The key part of the title here is “The Selling.” Allison spends considerable time addressing the awkward dance WPS teams were doing in terms of balancing the traditional youth player-and-parent market with the 21st century idea, most forcefully articulated by Joanna Lohman, of marketing to those who are single and childless -- and, in many cases, people who identify as LGBTQ or are at least staunch allies.

I’ve always been of two minds on Lohman’s take, though she’s certainly one of the smartest people I’ve encountered in a couple of decades of covering women’s soccer. On one hand, yes, the young (or young at heart) adult superfan who waves flags and knows not only which home players to cheer but which visiting players to heckle is someone any club certainly wants, and that person may make it to more games than families who have to spend a lot of Saturdays at U-14 tournaments at some dismal, distant field. I was that young adult once upon a time -- I got a souvenir at a Carolina Dynamo game because I was the only one paying attention to the game and not “Dynamo Dawg.”

On the other hand, good luck filling the stands when you’re not giving group rates to the Suburban FC Silver Dragons. Washington superfan Kevin Parker also made that point in response to Lohman, even referring to her invocation of something called the Rogers Innovation Diffusion Model -- which will absolutely be my band name when I get a couple more School of Rock people to join me.

Allison’s exploration of the topic, though, is far more detailed than anything most of us can offer. And some of the attitudes she uncovered were surprising and disappointing. One would hope that we’ve made a bit of progress in the eight years since Allison’s WPS immersion in terms of getting LGBTQ groups to mingle with cis hetero parents.

She also informs younger readers -- or reminds those of us who forgot -- that soccer was once considered the domain of women in this country, long before everyone started incorrectly griping that men are paid more than women even when they don’t qualify for the World Cup: “(S)occer once had uniquely masculine associations in the United States given its early adoption by men but developed a gender-neutral or even feminized reputation over time with the increasing participation of girls and women.” I dealt with this first-hand during the 2000 Olympics, when some of my colleagues in journalism were dismissing the men’s soccer team -- which wasn’t bad that year -- with snide comments. I wish I could find the one who snarked on their hair.

Given that snark and a lot of current chatter using “BroSo” as a term conjuring images of a bunch of Neanderthals playing for Neanderthal fans, I had to take issue with this one passage from Allison: “I hold that women’s soccer, rather than playing second fiddle to the men’s game, has been central to the sport’s growing momentum. In the second half of the twentieth century, organized soccer for girls and women experienced unprecedented growth in tandem with many transformations to postwar American society.” I see the point in terms of the youth game, and I know plenty of parents who dutifully sign up their boys and girls for soccer. But the youth game is stagnant, and we’ve needed decades for soccer to evolve past the “many participants, few viewers.”

I’m not sure men’s and women’s soccer at higher levels have grown in tandem. OK, Portland, I hear you, but you’re the exception.

Speaking of exceptions, I was thrown for a bit when Allison started to discuss fellow academics Andrei Markovits and Steven Hellerman and their vital book Offside: Soccer & American Exceptionalism. I have a passage in my latest book (Why the U.S. Men Will Never Win the World Cup) discussing this and arguing against the pervasive idea that “American exceptionalism” means “superiority” rather than “unique.” As I put it in my book, if everyone jumped off a cliff, we wouldn’t, but if everyone did not jump off a cliff, we just might.

Allison writes: “Within Markovits and Hellerman’s analysis, for instance, women’s soccer is purported to occupy a space of 'exceptionalism,' with the U.S. Women’s National Team emerging as a global powerhouse because the sport has historically been marginal among men.”

That floored me, because I don’t remember Markovits and Hellerman saying any such thing. But when I followed the footnotes (she has even more than I do in my book), I found she’s talking about another work by Markovits and Hellerman -- a paper arguing that the countries that made early progress in women’s soccer did so because they didn’t have a strong men’s program. That’s an interesting premise, but without Title IX, the USA would probably be well behind Germany and England in women’s soccer to this day.

The academic format may give those of us who go an entire day without saying “hegemonic” a bit of a headache. But Allison’s writing is far more accessible than, say, the first academic work by legendary prog-rocker Bill Bruford, whose writing is as difficult to read as his drumming was difficult to replicate. Allison writes in English, not academic-ese.

So women’s soccer fans with a rational fear of academic writing should go ahead and dive into this one. It’s full of insights that may mean different things to different people, and any talk of how to take women’s soccer to the next level of professionalism will be better with Allison’s work informing the discussion.