Julio Serrano on advocating for Latino coaches in the USA 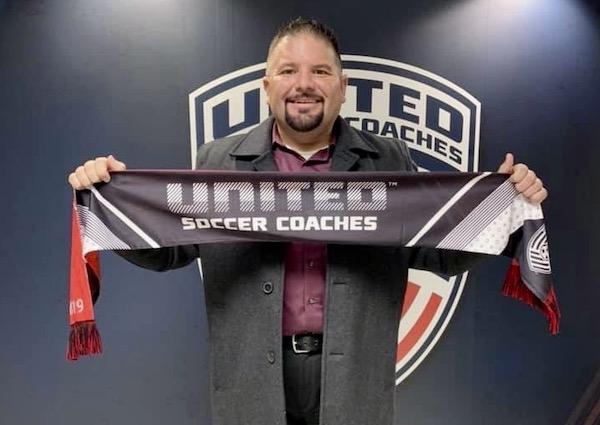 JULIO SERRANO: Growing up in Mexico until the fifth grade, it was everywhere on TV, in newspapers, before, during and after school, as well as watching my father play soccer and tagging along with him to his games. So it was everywhere.

JULIO SERRANO: Is and always has been watching enjoying the game with my dad, Cain Serrano. Even when I was very young, we would discuss the games and share ideas with each other of things we would do or change in each team’s tactics.

SA: What is it about soccer that inspired you to pursue a career in the sport?

JULIO SERRANO: I first started coaching as a community service project. We needed so many hours of volunteering to graduate and one of the organizations on the list was coaching soccer at Half Moon Bay Sports Club, including the recreational program. I noticed the impact and change that can happen in a young person's life when they have someone who supports them and allows them to explore the game.

SA: Your favorite teams and players growing up?

JULIO SERRANO: After we moved full time to the San Francisco Bay Area, we lived in a canyon off Highway 1 in Half Moon Bay. We had no cable TV, but we did have a rooftop antenna. One of the channels that we were able to get was the RAI Italian TV channel. They would often show highlights and tape-delayed games. Because of this, I fell in love with Arrigo Sacchi’s AC Milan that included Marco Van Basten, Frank Rijkaard, Ruud Gullit, Franco Baresi, Paolo Maldini, Carlo Ancelotti ... But one of my favorite players to watch played for Napoli at the time: The Brazilian Alemão.

SA: How do describe the Heart of the City program?

JULIO SERRANO: A great organization that is trying to do its part to provide more soccer and educational opportunities to underserved communities in the Lake County area of Illinois.

SA: Any experiences in your various roles at different levels of the game that you think are particularly valuable as chair of the United Soccer Coaches' Latino Coaches Advocacy Group?

JULIO SERRANO: My journey has been a non-traditional one and every role that I have had -- college coach, DOC, instructor, youth coach -- we have made mistakes, but I believe that all those mistakes have prepared me for this role! One of them is to not take ourselves as coaches too seriously. We have an important role to play and it’s not just winning games. Sometimes as coaches and administrators we get too wrapped up -- as Simon Sinek says -- in the "how" and the "what," and too often than not we have forgotten about the "why?"

SA: What were your first steps after being appointed Chair?

JULIO SERRANO: Contacting as many Latino soccer coaches that came before me. Striking up conversations with them and asking what they felt has changed and maybe was has stayed the same. One thing I found was that all of them, like our Latino community of coaches, had a little different twist. But most were echoing similar points!

SA: How would you describe the mission of United Soccer Coaches Latino Coaches Advocacy?

SA: How will you judge whether your tenure as chair is a success?

JULIO SERRANO: By how many people are actively involved with our group and how well we mobilize as a group. We would like to leave a group that communicates, that is diverse and focuses on goals and results. We need to continue to lay the groundwork and continue the work that our predecessors have started. We want to leave the group stronger and more invested in each other.

SA: From your vantage point over the years, what progress have you seen for the USA's Latino soccer community at various levels, such as opportunities for youth players, college soccer opportunities, coaching at higher youth levels, college, and U.S. national team program.

JULIO SERRANO: The game, in general, has made incredible strides across all levels in the USA. In a lot of ways the game has been more accessible than ever for a player to rise through the various mainstream levels: through youth brackets, ECNL, DA, High School, JC/CC, NAIA, NCAA, etc, etc. And in a lot of those areas, it has certainly benefited the Latino and Latina players. Right? It's simple math: more youth soccer leagues equal more teams, more college-sponsored soccer teams more rosters spots, more youth international levels, more opportunities. Since there has been a progression in the creation of all of that, on the surface, yes, Latino and Latina players have benefited.

SA: Any views on MLS, with its increase in Latin American players, such as South American playmakers, and coaches (Tata Martino, Guillermo Barros Schelotto, Matias Almeyda, Freddy Juarez, Giovanni Savarese) having an effect on the USA's view of the Latin-style of play?

JULIO SERRANO: These coaches are high-level coaches, who have brought a way, a style about how they approach the game. And it’s no surprise that they have stamped their way of playing immediately on their programs and in most cases have been relatively successful.

And it’s not just style which they affect but their rosters are also a reflection of that style.

All of that is great but I would still like to see more USA-raised Latino coaches in head coaching in MLS. I would love to see more USA-born and U.S.. national team-eligible Latino players (currently only 7%) plying their trade in our top professional league of course, but we/me/you/us must do better to make sure the pipeline of talent from all aspects of society is not blocked and broken, including seeing more Latino-based ownership.

SA: What would you like to see from U.S. Soccer, which infamously created its Youth Task Force without representation from the Latino coaching community and doesn't employ any Latino head coaches among its 18 national teams?

JULIO SERRANO: This is how I like to think about things, Mike. My role -- coach, instructor, or director -- is to do one simple thing: And that is to create an environment that allows and welcomes everyone. You want your organization to reflect the population they represent. We are traveling down that road and still have a lot of work to do.

JULIO SERRANO: Awareness of the problems is the first step, and then putting individuals in charge who are prepared to take action as well as make a personal effort to fix the gap between enthusiasm and participation will be critical.