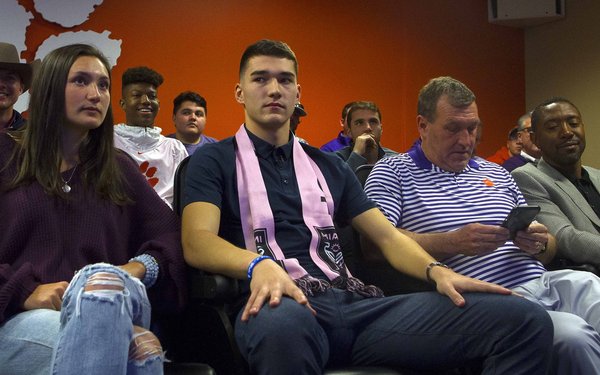 Inter Miami took Clemson forward Robbie Robinson with the No. 1 pick in the 2020 MLS SuperDraft.

Robinson became the first player from Clemson and just fourth MAC Hermann Trophy winner to be selected with the top pick. Inter Miami founding owner David Beckham did the honors of letting Robinson know of his selection via Skype.

Robinson was tied for the Division I lead with 18 goals and led the nation with 41 points for the Tigers, who reached the NCAA Tournament quarterfinals.

Inter Miami also had the No. 3 pick and took right back Dylan Nealis, a senior from national champion Georgetown.

It also acquired the rights to former Columbia goalkeeper Dylan Castanheira taken at the end of the 2019 SuperDraft after he signed with the USL Championship's Atlanta United 2.

“Robbie and Dylan Nealis have both had exciting collegiate careers and will bring more offensive and defensive depth to our roster,” said Inter Miami sporting director Paul McDonough. “As for Dylan Castanheira, he’s a promising young player that we look forward to continue watching this season.”

Robinson was selected ahead of Indiana defender Jack Maher, who was picked by Nashville SC with the No. 2 pick. Nashville SC was so confident of his selection GM Mike Jacobs and a bus of Nashville SC fans arrived at Maher’s home in Caseyville, Illinois, to present the news in person.

Nashville SC then traded up to select Wake Forest's Alistair Johnston with the No. 11 pick and Charlotte goalkeeper Elliot Panicco with the No. 13 pick.