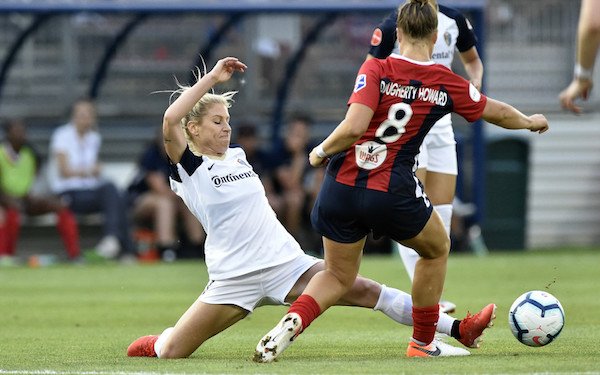 The North Carolina Courage traded inspirational midfielder McCall Zerboni to Sky Blue FC in exchange for the rights to Hailie Mace and a conditional fourth round pick in the 2021 NWSL College Draft.

Zerboni, a veteran of all seven NWSL seasons, started out with the Western New York Flash and spent the last three seasons with the Courage, winning NWSL Shields in 2017, 2018 and 2019 and back-to-back NWSL Championships in 2018 and 2019.

“McCall is irreplaceable and one of the greatest players and humans I’ve ever had the pleasure of coaching and knowing,” Courage coach Paul Riley said in a statement. “She has left a footprint and a legacy in our club that will live forever. She’s a warrior, a thoroughbred and a real footballer. She will be fantastic for Sky Blue and we wish McCall a tremendous future in the sport she has done so much to build.”

Like Zerboni, Mace played for UCLA. She was selected second overall at the 2019 NWSL College Draft by Sky Blue FC but elected to play for first full pro season with Sweden’s FC Rosengard.

Mace was the only college player named to the USA's 20-player roster for the 2018 Concacaf Women’s Championship.