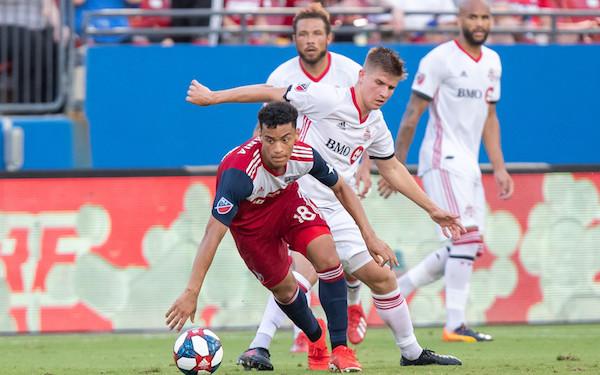 Brandon Servania became the first player bred in Alabama to be called into the U.S. men's national team when he was added to the squad training in Bradenton, Florida.

Servania is one of three young players who have hailed from Birmingham, Alabama, and played internationally for the USA in the last year after entering the FC Dallas academy.

Chris Richards, his teammate on the U.S. U-20s in Poland, is with Bayern Munich's first team at winter training in Qatar. Tanner Tessman, who played with the U-20s in the fall, has committed to play soccer and football on a football scholarship at Clemson. The first male player who grew up in Alabama to represent the USA internationally was Kyle Helton, a member of the 2003 U-17 World Cup team in Finland.

Aron Johannson, who played in the 2014 World Cup, was born in Mobile, Alabama, to Icelandic parents and moved to Iceland when he was 3.

Servania, 20, played for Birmingham United Soccer Club and Vestavia Hills Soccer Club before moving to Dallas. He played one season at Wake Forest and then turned pro with FC Dallas in 2018. He got his break when he starred for the USA in central midfield at the 2018 U-20 Championship, where he played against his younger brother. Jaden, who represented Puerto Rico.

Servania didn't make his first start for FC Dallas until he returned from the 2019 U-20 World Cup, but he ended up playing in 18 of the last FC Dallas 19 games, including a start in the 4-3 loss to the eventual champion Seattle Sounders in the 2019 MLS playoffs.

Servania is the fourth FC Dallas player and fifth member of the 2019 U.S. U-20 World Cup team to be called into the U.S. national team camp. Of the 26 players in camp, 15 players are age-eligible for the Concacaf Olympic men's qualifying tournament that begins in March.