Can you market 'authenticity'?

The major soccer event may have passed you by, but last week Eintracht Frankfurt opened an office in Manhattan. The German club is currently 13th in the Bundesliga at the season's halfway point, just three points clear from the relegation zone. It's possibly not the best time for a mid-level European team to indicate that it wants to be a global player. 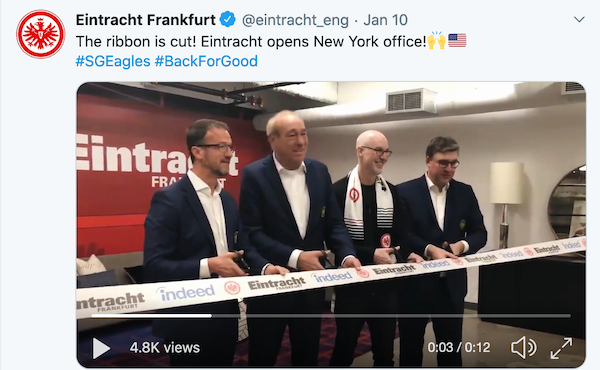 Here's Eintracht's Director of Sport Fredi Bobic  at the opening, sounding like he's come 20 years too late to the party: "Soccer's playing an increasingly large role in U.S. professional sport and is growing both in the men's and the women's fields. The U.S. is a significant target market thanks to its digital innovations and excellent training opportunities. The new New York office will help us reach our goals and gain a long term foothold in the U.S."

The Bundesliga knows that it's been beaten hands down to the tight U.S. sports market by the English Premier League, the Champions League, and -- to a lesser extent -- the Spanish and Italian top flights. Ask a U.S. fan to name their favorite European team and the chances are that it won't be German. If they do name a German team, chances are that it will be Bayern Munich. My experience of U.S. soccer fans, though, is that they are not that much more interested in the Bundesliga than German fans are in Major League Soccer.

Fan comments on social media were predictably scathing, given that Eintracht have taken just one point from their last seven games. "All well and good -- but the bottom line is that winning and getting points in the league is what counts ..." was a typical reaction on the home front. "Would rather we sign a couple of decent players," was another. In counter-reaction, one fan noted: "Without publicity and sponsors, preferably worldwide, you get nowhere. That should be clear to everyone." It's the circular dialogue that's dominated the club game at its highest levels for the past 30 years -- should we buy trophies, or retain our integrity and forego consistent success?

The Bundesliga itself is so keen to increase its international reach that it's taken to flying journalists over to Germany to watch games live. Last fall, the league's CEO Christian Seifert told international media invited to Frankfurt for Eintracht's game against Bayern Munich that "there's no question we have to increase our footprint in the Americas and the rest of the world -- we're the second biggest league in Europe, and the sixth biggest league in the world." For that, he added, you need "profile clubs -- at the moment Germany has two, Bayern and Dortmund. Hopefully in the future we will have three or four."

The league's marketing strategy is to focus on its "authenticity," based on the slogan Football as it's meant to be. So, how is football meant to be? A (thankfully) short promotional video delivered the usual clichés about that most overrated quality in sport -- passion. It's all about the century-old clubs and their colors, the loyal fans, the tradition, and so on. Note: the team currently at the top of the Bundesliga is RB Leipzig, a cash-backed club founded by Red Bull that's only 11 years old, boasts a corporate logo, has an executive structure that excludes membership beyond 17 hand-picked individuals, and is universally despised and derided by those very traditional and loyal fans the Bundesliga is keenest to promote.

The league's U.S. marketing and communications manager, Eduardo Rivoldi, claimed that "consumers want brands to be authentic", and that the Bundesliga can profit from being the "last fortress of the people's game" -- this claim being based on the fact that at an average of €26 ($29) its ticket prices are the cheapest of the major European leagues. There's a further contradiction here, however. As soon as you brand and sell something, you endanger its apparent authenticity. Ask any radical artist, writer or musician who set out with the goal of changing the world how they felt when they suddenly had to stand up, stand out and sell themselves to pay the rent. For as well as broadcasting its authenticity, Rivoldi told journalists that the league's own U.S. offices aim to "raise the awareness of the league in the Americas -- getting people to tune in, buy the jerseys, come over to Germany, to focus on U.S. players while building up the clubs and the culture of the league." Rest assured, though, that the Bundesliga would "never" stage an official league game abroad, as it goes against the idea of authenticity and would alienate the home fans. Good to know that there are limits to commercializing tradition.

As for Eintracht Frankfurt, it's a bold move to open a New York office at this point. It could possibly pay off if enough American fans and sponsors are -- for whatever reasons -- excited by the idea of following a mid-standings team thousands of miles away. Right now, though, Eintracht is not in place to become one of Seifert's third or fourth German 'profile clubs' (though RB Leipzig probably is ...). It will take a lot of training clinics, camps and exhibition games to effect the desired slow burn penetration of an already very crowded market. Relegation to division two -- which has happened to the club four times in the past 25 years -- is presumably not part of that plan.

(Declaration of interest: Ian Plenderleith accepted the Bundesliga's hospitality in Frankfurt last fall in the form of food, drink and merchandise. He is also a supporter and member of Eintracht Frankfurt.)

germany
7 comments about "Can you market 'authenticity'?".
Read more comments >
Next story loading