The soccer from the young teenage boys thoroughly impresses me – as does the entire scene at the Boys Development Academy games that I check out from time to time.

Rarely is the ball mindlessly booted upfield. Defenders pass to each other, and often back to the goalkeepers, as they try work it to the midfielders. If they fail and the opponents score, the coaches don’t get upset. They say something encouraging.

There’s an emphasis on playing in a way that might be risky for the final score – but is important for the long-term development.

Neither the coaches nor the parents scream at the kids. When advising their players, the coaches do so in a civil, concise manner, usually when the ball’s out of play.

I notice a better flow to these games compared to ones I’ve been reffing or coaching in other leagues. At the U-12s in DA play, subbing had been done on the fly. What an excellent idea. In all games, play isn't constantly interrupted in the manner that I find so irritating – such as one coach subbing players a minute after the other team subs. Or players getting replaced after ridiculously short stints in the game.

The fit referees traverse the field, signal and gesture just as an assessor would want them to. They obviously take pride in their work, taking their tasks seriously – as if they’re aiming to climb the officiating ladder.

Watching Boys DA U-13s and U-14s – and U-12s before that age group was eliminated this season – I see a remarkable difference compared to so much of American youth soccer I’ve watched in the past. I had been accustomed to youth teams with one or two outstanding players, some good players, and many who simply lacked technique or a sense of tactics. All the players on these DA teams might not end up stars, but the overall skill throughout the rosters is certainly at a higher level that what we watched a couple of decades ago.

U.S. Soccer launched the Boys Development Academy in 2007 as a response to, in a nutshell, U.S. youth national coaches’ concern about the wild west landscape of the American youth game. Between myriad state, regional and national competitions, showcase tournaments and ODP events, young elite American players were overloaded with games – far too few of them being “meaningful competition.”


A Development Academy with elite clubs set up by U.S. Soccer would emphasize player development over results, and make a shift from an “overburdened, game emphasis” model to a “meaningful training and competition” model. U.S. Soccer, whose previous involvement in the youth game was limited mostly to running the youth national team program, had in 1999 started a residency program for its boys U-17s in Bradenton, Florida. It imagined that top clubs around the nation would put elite teenage players in a similar day-to-day player development environment.

The DA’s creation coincided with MLS mandating its clubs field youth programs. The progress since has included a significant increase in young Latino players reaching the higher levels of American soccer. The pro clubs had proved more receptive to Latin-style players. The funding of youth academies by MLS teams and the necessity of amateur youth clubs to scholarship players in order to remain competitive dramatically increased opportunities for players who had historically been prevented from playing elite youth soccer because of the cost.

Indeed, one can point to many positives that have come out of U.S. Soccer’s ambitious DA program. It does deserve credit for helping raise the level of players, coaches, and even referees

But the landscape and soccer culture in the USA has changed significantly since 2007. And now the Boys DA and the manner in which U.S. Soccer is involved in youth soccer demands re-evaluation.

The professional game has grown dramatically. MLS fielded 13 teams in 2007. It will kick off 2020 with 26 teams. The number of Division II clubs tripled as USL Championship sets to field 35 teams in 2020.

And U.S. Soccer has ramped up the degree to which it dictates, regulates and restricts.

That created another side to the idyllic scene I started with. Those boys are banned from high school soccer and the younger ones can’t even play middle school soccer. Since the high school ban was implemented in 2012, for how many boys was that a worthwhile sacrifice?

And if a DA kid gets caught donning his high school jersey, he gets suspended. U.S. Soccer punishes kids for wanting to play more, for seeking different soccer experiences. Gone are the days of teenagers, if they’re in the DA, playing in adult amateur leagues, like Clint Dempsey in Texas Latin Leagues.

The restrictions may have been prompted by good intentions -- six-game weekend tournaments are obviously too much -- but it now seems like U.S. Soccer’s leaders in Chicago think only they know what’s best for every elite young player in every corner of the country. Some of their mandates make running youth clubs more expensive when that’s the last thing we need at the grassroots for American kids and their families.

U.S. Soccer requires at least a B or A licenses for a coach to serve as a head coach of a DA team. I am quite sure anyone reading this knows coaches without a USSF B license who wouldn’t ruin 12-year-old players, and many who would do a fine job. That licensing requirement adds significant costs, because the licenses are expensive to get and the coaches who have them can demand higher fees. Many clubs who were enticed by DA status – and courted by U.S. Soccer because it needed to fill out the schedules of full clubs at the younger age groups -- are struggling financially more than ever.

Other U.S. Soccer staff and facility requirements, and travel requirements strain a club’s budget. U.S. Soccer is supposed to serve all of its members, but it has created a system in which many clubs around the nation have to suck resources away from the majority of its players to fund the minority who play DA.

But it was the boss of a rich MLS club who told me it was absurd to send a team 3,000 miles to play in a three-game showcase.

The architects of the DA’s creation are no longer involved with U.S. Soccer and it has changed since the launch, when the idea was to spur better soccer experiences for elite players, limit travel and alleviate pay to play. Now the DA travel requirements for many clubs, especially since the horribly executed tiering system was introduced, can be as arduous or worse than what existed pre-DA.

The areas of player development that the DA was supposed to address do not require a national league.

Not forcing all the DA clubs across the country to play on the same schedule would address several issues. For one, create possibilities of managing a combination of elite club ball and high school play. Giving clubs the freedom to navigate the high school decision would actually benefit some players. High school soccer is not nearly as awful as the folks at U.S. Soccer have you believe. It exposes players to the pressure and exhilaration of playing in front of crowds and puts players from ages 14 to 18 -- from freshmen to seniors -- on the same field.

It’s one thing for a professional club that doesn’t charge to require its players to skip high school ball for long-shot dreams -- and another for U.S. Soccer to force that restriction on every player across the entire country who wants to play in its league. In fact, it’s sad how U.S. Soccer has dismissed instead of helped improve one major part of the youth game that’s not expensive for players and their families.

The geographically enormous USA – with extreme differences in weather and demography -- is not suited for a one-size-fits-all approach to youth soccer. And what disastrous outcomes is U.S. Soccer imagining were it to trust clubs and leagues around the nation with more autonomy?

Even if only half the leagues and clubs around the nation got it "right," the populous of players on a promising track would still exceed that of many nations that produce world-class players.

I’d also argue that we wouldn’t want all our clubs and players to be coached the same way. Our players need to cope with different types of opponents. There’s nothing close to a guarantee that the small group of experts in Chicago have the formula to develop world-class players, as the DA slogan claims it’s doing. I’d venture that there are youth club leaders out there better equipped to judge how to get the best out of young talent in their area.

The Federation providing more guidance and supervision to youth soccer in 2007 was a smart move. And it's thanks much to U.S. Soccer creating the DA that now, in 2020, it’s safe for U.S. Soccer to retreat from youth game.

It’s time to trust the clubs to create their own roadmap and to allow for more regionalization. 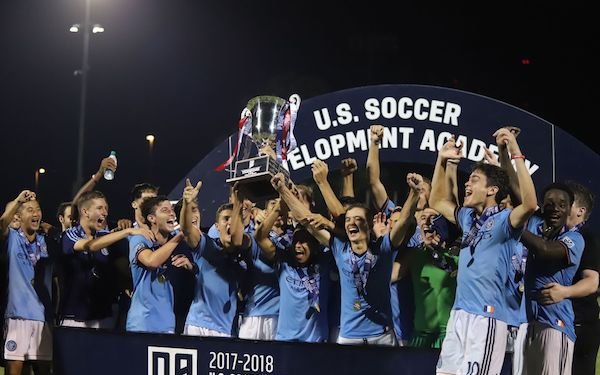 Such players may have emerged thanks to U.S. Soccer providing a platform that MLS clubs could conveniently take advantage of. (U.S. Soccer and MLS should be extremely grateful for and reward in some manner the amateur clubs that provided the foundation.)

And those players I watched enjoying those polished facilities, with fine reffing, competing against teams aiming to play a similar way? That can still happen without U.S. Soccer running things. Plus the boys could benefit from, at other times, playing in different environments, against different formations, different styles.

The way U.S. Soccer is running the DA now, neither the MLS clubs nor the amateur clubs are happy. The various criticisms include too much travel, too much uneven competition, too structured, too many regulations. Granted, American soccer will always have challenges U.S. Soccer can’t solve and isn’t at fault for. But MLS, USL clubs and the top amateur clubs are capable of navigating a way for their young players to get suitable competition.

By no longer running the DA, U.S. Soccer can dedicate its resources to the youth national team program and scouting. It could create training centers around the country for potential young national team players to convene on a regular basis without having to travel far or spending too much time away from their clubs, family and school.

Staying above the fray of the youth turf wars increases the chances of U.S. Soccer regaining the confidence of its membership. Reallocating resources that went to the DA to expanding the scouting network improves the chances of discovering talent from less traditional areas. The massive youth and pro game that U.S. Soccer helped create is worthy of and prepared to thrive with more autonomy. And the best will rise to the top.