The United Soccer Coaches convention’s Exhibit Hall is always an exhilarating and bewildering place to be. The overall atmosphere doesn’t change, but the various wares within offer a glimpse into soccer’s soul. 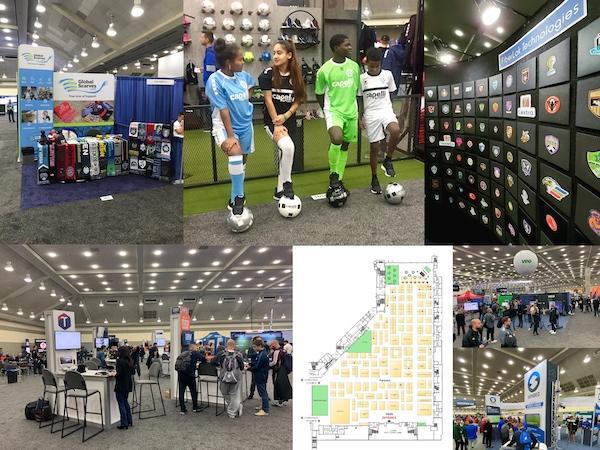 Equipment and apparel companies are out in force, of course. Soccer leagues set up booths to show off how many teams they have or explain who they are. Visitors can also find booths on artificial turf, tournaments, overseas tours and Chipotle.

A big exhibitor once again was Teqball, the skill-intensive soccer table tennis game that now has splashy world championships and has recently taken the first step toward Olympic sports recognition.

Of the various gizmos on display, the clear winner was a robot that can line a soccer field. You program it through Google Earth, watch it do a dry run to make sure your lines aren’t accidentally running into a wall or a bench, then give the go-ahead to let it do hours of labor for you. The robot is also useful for surprising the youth players walking the aisles.

Apps are big business these days, and it’s worth highlighting SportsEngine, which is working to integrate compliance with the federal Safe Sport Act into its team-management software. (Disclaimer: I write for NBC’s OlympicTalk blog, which is in the same corporate family as SportsEngine.)

A couple of more curious trends were on display in Baltimore:

1. Players are being put into smaller and smaller cages, as if they’re training for MMA rather than soccer. One such cage featured a demonstration by some young players who were having fun wrestling each other to gain possession. Another had younger players taking turns whacking the ball against one wall of the cage, either in an effort to get more touches or to escape.

The concept of getting more touches on the ball in small spaces has gained momentum with the emphasis on street soccer in futsal, and it dates back to the early days of indoor soccer. The young players grappling in one cage might consider going down the road to try out for the Baltimore Blast, the venerable indoor team that has left its downtown arena and now plays in a Towson University arena on a field that’s as crowded as a rush-hour subway.

2. Big Brother is watching you.

If you’re a coach who doesn’t trust his or her eyes and would like to know what a bunch of sensors and machine learning can tell you, you’re in luck. Various apps and apparatuses can accumulate, slice and dice data and video for you.

At the Exhibit Hall’s Innovation Hub, one evangelist of 5G happily told everyone that speedy connections will help coaches show parents some video clips to explain why their kids aren’t playing. Fortunately, the Positive Coaching Alliance booth wasn’t within earshot.

A more positive trend: Women’s soccer players are moving smoothly from the field to the business world.

Yael Averbuch continues to grow her company -- Techne Futbol, a training program building on her skill-oriented training videos. Molly Menchel, who has played in the NWSL and Europe, worked with her in the Exhibit Hall.

Becca Moros was back in the Exhibit Hall, along with Utah teammate Mandy Laddish, with her FootyBoard, a portable board that lets players turn fences into rebounding walls to work on passing and receiving.

Tiffany Weimer and Adelaide Gay, who is planning to continue her goalkeeping career in Europe, were busy handling a mob of people who wanted to buy the elegant Duktig brand training planners, which are now waterproof so that coaches like me who leave our bags out in the rain won’t lose our plans and our minds.

Players coming up with the best equipment for training and learning? You don’t say.