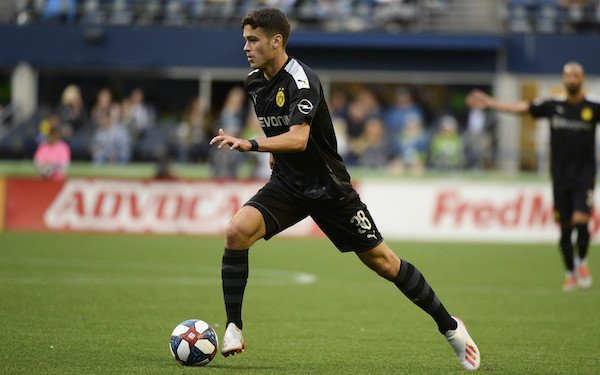 Less than seven months after he signed with Borussia Dortmund, 17-year-old Gio Reyna debuted with the Bundesliga, entering in the 72nd minute of Saturday's 5-3 win at Augsburg.

Reyna followed in the footsteps of his father, Claudio, who played at Bayer Leverkusen and Wolfsburg in Germany at the start of his career, and another American, Christian Pulisic, who debuted for Dortmund four years ago and was sold to Chelsea for $73 million last year.

Claudio Reyna was a three-time national champion at Virginia and the 1992 and 1993 Soccer America Men's College Player of the Year when he signed with Leverkusen after the 1994 World Cup. But it wasn't until his second season that he played for the first team in the Bundesliga.

The youngest American to ever appear in the Bundesliga

Gio's meteoric development resembles closely that of Pulisic's in 2015-16.

Both signed when they were 16, taking advantage of European passports to register before they were 18. Both were coming off their international debuts in the U-17 World Cup, where the USA bombed out in the first round.

But they both quickly caught the attention of Dortmund's first-team staff with strong play at the youth level. Reyna had eight goals and eight assists for the U-19s in the A-Junioren Bundesliga and UEFA Youth League. Reyna is 103 days younger than Pulisic was when he was named to Dortmund's matchday roster for the first time for a game against Fortuna Duesseldorf in December.

Reyna's debut on Saturday was not a surprise as he started and scored against Feyenoord in a friendly game against Feyenoord at winter camp in Spain and was promoted to the first-team roster. The debut makes him the youngest American to ever player in the Bundesliga and the fifth youngest player overall.

“A dream came true today," Reyna said. "It was a great game for us. When the coach called my name, I was so excited. I was nervous but the guys made me feel comfortable.”

Reyna came on for Thorgan Hazard two minutes after Dortmund, which had trailed 2-0 and 3-1, took the lead 4-3.

Erling Haaland, the 19-year-old Norwegian acquired from Salzburg, scored three goals in the first 23 minutes of his Bundesliga debut after coming on in the 56th minute. Reyna later had one chance, but put his shot wide.

Erling Haaland, whose father, Alf-Inge Haaland, played with Claudio Reyna at Manchester City in 2003 got all the attention, but Dortmund coach Lucien Favre made sure to note Gio Reyna's debut.