Lalas Abubakar  has become one of the most recognizable players in the American game, and not only because he has the wildest hair in Major League Soccer. 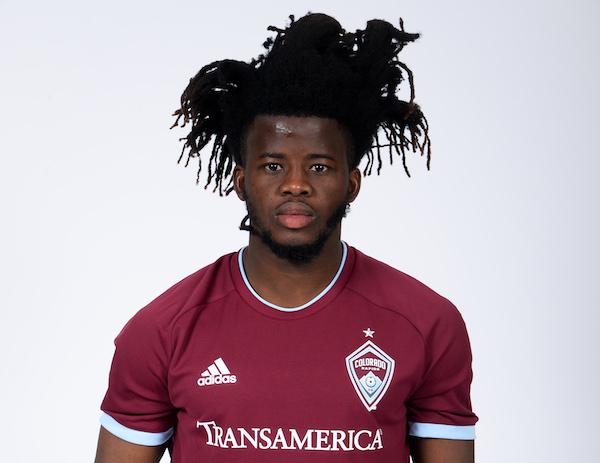 The Ghanaian center back last year established himself among the league's premier defenders while playing for a Colorado Rapids team that didn't win a game in the season's first two and a half months but finished strongly, going 5-2-0 after Robin Fraser took charge in late August, with wins over the New York Red Bulls, Seattle Sounders and LA Galaxy and the losses to MLS Cup runner-up Toronto FC and Supporters' Shield winner Los Angeles FC.

Abubakar, 25, thinks big things are afoot with the Rapids. There's nowhere he'd rather be.

“If you look at points per game, the last 15, 17 games that we played, we're one of the top teams in the league ...,” he said during last week's MLS Media and Marketing Tour media round table at Banc of California Stadium. “We won some big games and was really good. We still have the confidence and we're looking forward to this season to finish what we started last season.”

Abubakar went to the Rapids on loan from Columbus last May and was thankful to sign a full-time deal with the club during the offseason.

“This is really big for me, because right when I got to Colorado, I felt so welcomed, by the club, by the supporters, by the players,” he said. “So right away, I knew I wanted to stay there.”

As a boy in Khumasi, Abubakar dreamed of playing in Europe, the world's greatest stage for the game. Now, he thinks he's in a better place, and he encourages Ghanaian youth to follow his example.

“When I was growing up, every Ghanaian wants to go to Europe,” said Abubakar, who arrived in the USA in 2014 to play for the University of Dayton. “But now, when you look at MLS, how much it's growing, everybody wants to come to MLS and play. Now if you talk to any Ghanaian back home, he wants to be in the MLS, he wants to play in the MLS. ... Before, maybe, I would say you got to think about going to Europe, but not anymore. [I tell them] you got to do whatever you can to make it to the MLS, because MLS is a bigger league now.”

The 6-foot-1 Abubakar figures to partner with rising 6-3 youngster Auston Trusty, acquired in an offseason trade with Philadelphia Union, in the middle for Colorado. He thinks tighter defense will make the difference this year.

“When I arrived in Colorado, I asked myself, I said, 'Look, every single game you guys score a goal. So how do we prevent the other teams from scoring?' I feel like if we keep the other teams from scoring, we win every single game. ... With Trusty, I told him we need to make sure we keep the defense really tight and not allow a lot of goals, because we have so much attacking pieces, that we can win more games.”

The presence of Fraser, one of the finest center backs to play in MLS, is crucial.

“We've got a very nice, very good coach,” Abubakar said. “The idea that he brought was really good, and we love it, and we are excited for this season, to have him for the full season.”

Abubakar is surely the Rapids' most recognizable player, although his nuanced play and physical dimension at the back has only so much to do with that. It's his hair, sprouting every which way from his head. How does one sculpt so awesome a 'do?

“I don't do anything with my hair,” he said. “I've been growing my hair for five years, and I haven't done anything. It's living in its own world. Every year it changes. Every year some come off, some grow, so I just leave it.”

He said he wishes it would flow upward, “but I don't have any control over it. The more it grows, the more it comes down, because it's getting heavy. I don't like when it rains. It gets heavy and I can't run.”