The U.S. Open Cup has identity and scheduling problems. Here's a four-step solution.

What’s the purpose of a cup competition today?

The U.S. Open Cup, like the FA Cup, started as a national championship when no league could claim to be the country’s top division. It’s hard to make a case today for the cup winner to be called the national champion. Oddsmakers are giving Liverpool more than a 95% chance of winning the Premier League this season, and yet they’re likely to be bounced out of the FA Cup after fielding a B-team and maybe a C-team.

At the risk of delving into corporate consultant lingo like “mission statement” and “vision statement,” we need to define the Open Cup’s purpose as we decide how we can dress it up or fix it.

The time to do so is now. The Open Cup has become the victim of soccer’s newfound popularity. U.S. soccer now has so many professional teams and so many interested amateur teams that the calendar has become too congested.

This year, the tournament starts March 24 and is due to complete three rounds by April 23. That’s a problem for teams that rely on college players who aren’t available until May.

The pro teams get an advantage this year because the games are spread out a bit more. But does a better schedule for pro teams make a better cup competition? Perhaps reducing the load on pro teams would decrease the chances of the upsets that imbue this competition with such romance and drama.

But is that the point? Is this a national championship, or is it simply a means to line up pro teams so that amateurs can take their best shots?

And if pro teams have to play several games in a condensed schedule and respond by playing reserves, does that take the luster off the upsets?

Consider Liverpool. After the busy “festive features” stretch that also included the World Club Championship, the Premier League power fielded a B-squad in the FA Cup against Shrewsbury Town and tied, adding a replay to the schedule. Jürgen Klopp immediately said he would field an even weaker squad for the replay, having promised his senior side a break. We’ve already seen the academy kids in action, having faced Aston Villa in a Carabao Cup quarterfinal absurdly scheduled for the day before Liverpool faced Monterrey in the World Club Championship in Qatar.

Sports have a natural tension between the fairest way to determine a champion and the most exciting. NCAA tournaments are exciting, giving us the David-Goliath matchups we love in soccer’s cup competitions, but the best team often doesn’t win. The 1986 and 1999 Duke men’s basketball teams would wipe the floor with the 2010 team, but the latter won the championship that eluded the first two.

At least NCAA tournaments, like the MLS playoffs, can be played at a logical time in an easy-to-follow format. When Virginia’s top-seeded men’s basketball team lost in the first round to Maryland-Baltimore County, the Cavaliers weren’t saving their best players for another upcoming clash. That game meant everything to both teams, and the millions of people who fill out brackets for friendly wagers all commiserated. 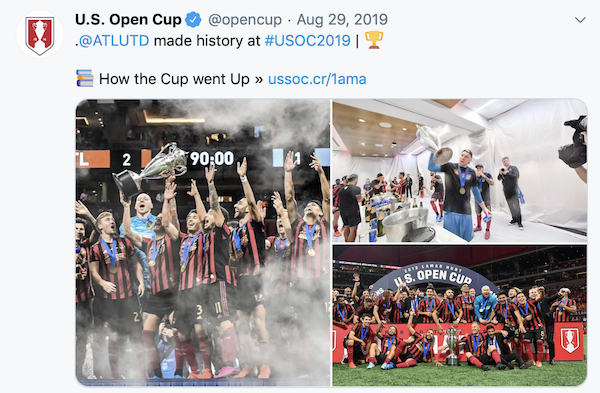 So the Open Cup has both an identity problem and a scheduling problem. USL League Two and NPSL teams have to field weakened sides because their players aren’t available. MLS teams may still field weakened sides, even with two weeks between games instead of one.

Can we solve both at the same time?

First, we have to acknowledge that the tournament, as currently constructed, can’t accommodate the summer league teams. This year, the early rounds are too early. In every year, the late rounds are too late. If any summer team ever goes on a massive roll and reaches the semifinals, that team will have the same scramble for players in August that it’s facing this March.

Second, we need to reconsider the traditional practice of spreading out the entire tournament over the course of a year. The Davis Cup in tennis recently ditched its yearlong format to have 18 teams battle it out over a week, an understandable impulse even if the rollout was a little clumsy. Playing that many games in a week doesn’t work in soccer, and carving out a few weeks for a 64-team tournament is unrealistic, but could we at least have a couple of clusters of games that we could turn into big events?

I’ve already suggested solving the summer league problem with a Summer Open Cup. Ditch the USL League Two and NPSL playoffs and instead play one national tournament. But maybe there’s a way to include them with some creative scheduling?

1. Let four summer-league teams qualify for later rounds to be held over the winter holidays. The Super-Y League uses this approach, playing in the summer but holding national finals in December. This will require working with the NCAA to let college-eligible players compete.

2. Take MLS teams that didn’t make the playoffs and enter them in the early rounds of the Open Cup, along with other pro teams and year-round amateur qualifiers, in November.

3. Play a big group of games, maybe the round of 32, on Boxing Day, building off the lead-in of England’s games. Follow up with two more rounds over the next 10-14 days. (Obviously, play in warm-weather venues.)

4. Save the semifinals and final for early May, after Concacaf Champions League play. If a summer-league team team makes it to this round, great.

We might lose some of the upsets we’ve seen in the Open Cup in years past. But upsets will be more meaningful.

And the idea of the Open Cup as a national championship -- more importantly, as an event -- won’t seem so far-fetched.