Arsenal and Man United fans experiencing The Thrill of the Unexpected

Within living memory, Arsenal and Manchester United competed every season for the Premier League title and were a more or less guaranteed annual presence in the European Champions League. When I spent some time in eastern Africa on a soccer project in 2012, almost every native of Uganda, Rwanda and Burundi I talked to professed to be a die-hard supporter of one of these two teams. 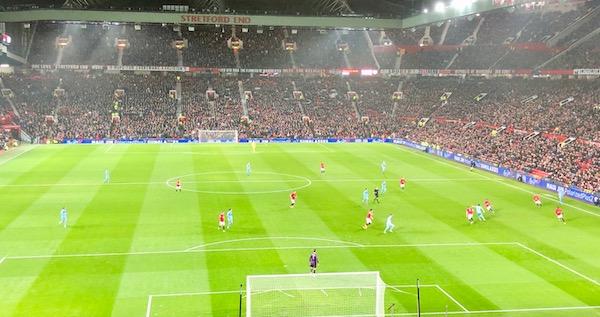 I was at first surprised by English club soccer’s global reach, and disappointed that not a single co-worker, hotel barman or taxi driver mentioned any kind of affinity for the local teams of Kampala or Kigali. Only the national teams inspired interest, loyalty and large crowds. I’d naively overlooked the reach of satellite television and the desire to identify with success, no matter how many thousands of miles away. As the Premier League touted itself to earth’s farthest corners during its nascent years, it was Arsenal and Manchester United who dominated. Their keen and combative rivalry was the backdrop to soccer’s transformation from a game into a business.

By chance, I’ve found myself at both the Emirates Stadium and Old Trafford within the past two months. Arsenal and Manchester United are still regulars in Europe, but only in the Europa League, playing mid-grade teams from Belgium and Greece instead of storied household names from Spain and Italy. In the Premier League they are struggling against the kind of clubs they used to eat for breakfast while perusing hotel brochures for Madrid and Turin.

At the end of November last year, I saw Arsenal lose at home to Eintracht Frankfurt in a Europa League group game. The stadium was less than half full, and the home fans had only one thing on their minds – the firing of Coach Unai Emery, which duly followed the next day. “We’re losing to a nothing team!” one fan behind me yelled in frustration during the second half after Eintracht had taken a 2-1 lead. As a Frankfurt fan, I was torn between being insulted and bursting into laughter, but I could see his point. Eintracht was 12th in the Bundesliga at the time and in the middle of a terrible domestic run.

Last Wednesday I watched Manchester United lose at home to Burnley for the first time since 1962. At this stadium the fans’ frustration and fury were aimed at the club’s unloved U.S. owners, the Glazer brothers, and the chairman Ed Woodward. Rumors that Old Trafford is a place with no atmosphere have been much exaggerated. At least, not when the team is losing to an effective blocking machine like Burnley, a side that may not play much soccer, but knows how to stop an opposing team intent on creative play.

I’m not much concerned with how either of these teams may buy their way back into success. Of much greater interest is the supporter reaction when a team lapses into decline after years of taking trophies for granted. Naturally, it’s much harder to cope with -- fans of other teams revel in your downfall, and former players lament the deficiencies of the current crop. You’re left blathering at a table in the corner about how Roy Keane would have won that game on his own, leaving the stadium staff to mop up the blood.

Both sets of fans should be grateful for glory’s remission. They’re finally finding out what it means to follow sport. Failure is as much a part of the game as it is a part of life. In their howling anger at the perceived scapegoats, they are truly coming to life and experiencing the full range of emotions that the rest of us put up with on a weekly basis. This erosion of entitlement is in fact The Thrill of the Unexpected.

I feel genuinely sorry for the fans of clubs like Bayern Munich and Juventus that win seven titles in succession. Which was your favorite celebration – the third or the sixth? Eventually you lose track, and the team’s only goal remains staying at the top to keep the marketing, promotional and accountancy departments happy. The fans tend to become unbearable, arrogant, complacent and condescending, while the rest of us look on, praying only for their team’s decline.

As fans, once we become used to almost uninterrupted triumph, then nothing else will do. Until we are forced to recognize that the greatest victories are achieved when you’ve risen from your lowest point. Arsenal and Manchester United fans should be grateful they have the chance to follow their teams as they attempt exactly that.

england
2 comments about "Arsenal and Man United fans experiencing The Thrill of the Unexpected".
Read more comments >
Next story loading