* * * * * * * * * *
Rarely will you see a 4-0 game in which the victor impresses as little as the USA did against Haiti in their 2020 Olympic qualifying opener. No matter how defensively an opponent plays, the world champion, fielding a squad with a total of nearly 1,000 caps, should deliver far more entertaining, clever and skillful soccer than we saw in its first competitive game under Coach Vlatko Andonovski. 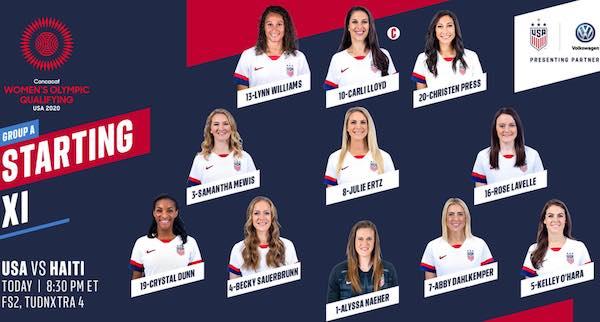 After Christen Press opened the scoring in the 2nd minute, 65 minutes of scrappy scoreless soccer -- including a Haiti goal nullified by what appeared to be a horrendous assistant referee error -- passed before the Americans scored with headers from Lynn Williams, Lindsey Horan and Carli Lloyd. There will be no regrets from anyone who passed on filling one of the 17,000 empty seats in the 22,000 capacity BBVA Stadium in Houston on Tuesday night.

If Haiti's goal in 18th minute hadn't been called back, her rating would be near rock bottom -- which also applies to her defenders -- because it came from a corner kick headed in from two yards out by an unmarked player. Otherwise, Alyssa Naeher wasn't called into serious action.

The outside backs Kelley O’Hara and Crystal Dunn, like most of their teammates, failed to conjure the kind unpredictable attacks that break down bunkering teams. Central defenders Becky Sauerbrunn and Abby Dahlkemper interfered successfully with the rare Haitian counterattack, but could have been more patient on the ball when they got it. Orchestration beginning in the back instead of the hasty approach could have made defending more difficult for the Haitians.

When a team plays without rhythm, the midfield deserves much blame. Not new for this U.S. women by any means, the midfielders' inclination was to get the ball wide as fast possible. Attacking through the middle rarely occured, nor did a prolonged exchange of passes that could force gaps -- and fatigue -- on the opponent. Rose Lavelle struggled when she had limited space, her one-on-one acumen failing her on the evening, and she shot poorly. Samantha Mewis hit an impressively accurate pass out of the back in the first half, but wasn't immune to the inconsistency that plagued the entire team. After she darted past Haitians and into the penalty area in the 40th minute, she needed only to deliver a low, short-distance pass to one of two teammates in front of the goal but lobbed it over the entire goal area. Julie Ertz may not have made major errors -- besides an awful shot -- but one expects her to provide the leadership to get the midfield in sync.

Carli Lloyd's goal, with a diving header, came a few seconds before the final whistle. Before that, her shots were weak and off target, and she couldn't pull the trigger from close-range in 52nd minute after a nice feed from Mewis because of a poor first touch. Had she converted earlier -- as a world-class center forward should with the chances she had -- the game may not have been such a grind. She made a case that the sub role may indeed suit her best. Lynn Williams deserves to be Woman of the Match, because her cross -- blitzing down the wing after losing a shoe, no less -- created the most brilliant moment of the USA's performance: Christen Press' crisp low volley for the opening goal. Williams also headed home the 67th minute goal to make it 2-0.

Megan Rapinoe came off the bench to deliver corner kicks that Williams and Lindsey Horan scored on -- then squandered a free kick nicely set up for her centrally, 19 yards out, by blasting it far and wide.

TRIVIA: Ten of the USA’s last 26 goals in its last eight games -- including three against Haiti -- have been headers.