The USA is certainly impressive when it comes to getting on the scoreboard early. Its first game of Olympic qualifying for Tokyo 2020, a 4-0 win over Haiti, started with a goal in the 2nd minute. Lindsey Horan  -- who finished with a hat trick and two assists -- struck in the third minute of an 8-0 win over Panama on Friday. The victory ensures the USA, which finishes group play on Monday against Costa Rica, a spot in the semifinal. The two semifinal winners at clinch a spot at the Olympics. 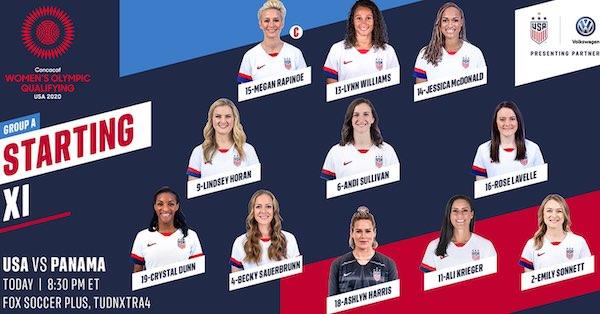 Ashlyn Harris got to play in place of usual starter Alyssa Naeher but was denied any opportunities to show off her prowess. Panama failed to take a shot.

When your goalkeeper gets no work, it's a good day at the office for the backline. But Panama, which had opened with a 6-1 loss to Costa Rica, rarely got past the midfielders. Emily Sonnett and Ali Krieger, who saw the least 2019 World Cup action of the defenders, did pass securely when called upon. Neither outside back, Sonnett or Crystal Dunn, made much of an impression in attack, but that was hardly necessary.

Rose Lavelle scored in the 21st minute and then descended into what must rank as her poorest performance for the USA -- especially considering the standard she set at the World Cup. Within a minute in the second half, she hit a cross -- or was it a shot -- into the stands although not under pressure. Then with a poor touch, she lost the ball at the edge of the penalty. While Lavelle, who ended the evening with a botched one-on-one scoring chance, never found her groove, Lindsey Horan recovered from a 5-yard miss in the 1st minute by scoring two minutes later. And she went onto bag a hat trick in addition to assisting on goals by Lynn Williams and Tobin Heath. Andi Sullivan handled defensive duties usually taken care of by Julie Ertz and passed cleanly.

Lynn Williams scored in the 15th minute and assisted on goals by Lavelle and Christen Press. Jessica McDonald helped set up the opening goal, assisted on the final goal, and finished one of her own. Megan Rapinoe couldn't figure out how to stay onside, passed horribly and squandered chances, including a one-on-one.