Not only was Coach Gregg Berhalter using a bevy of youngsters a smart move to help the U-23s prepare for Olympic qualifying -- they won and looked quite good in the process. With six U-23s, including three teenagers, among the starting field players, the USA beat Costa Rica, 1-0, in Saturday's friendly while outshooting and out-possessing the Ticos. The 18-year-old Ulysses Llanez, the brightest of the seven debutants, scored from the penalty spot after a foul on Reggie Cannon. 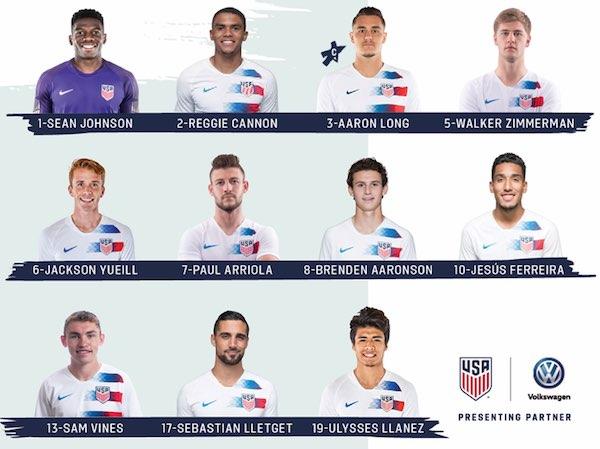 The Ticos' most serious threats came with Giancarlo Gonzalez's header off the crossbar and shots that defenders blocked -- leaving Sean Johnson, and his late-game replacement, Bill Hamid, with an uneventful afternoon.

Both outside backs contributed to the USA's possession dominance and helped keep the game mostly in Costa Rica's half. Sam Vines supported and combined well with Ulysses Llanez, including a one-on-one setup in the 68th minute. Reggie Cannon was fouled for the PK that gave the USA 1-0 lead, and on the other end blocked a close-range header from Marco Urena. His forays kept the pressure on the Ticos till late in the game. Walker Zimmerman, who impressed a couple times with long, accurate passes, made a crucial and clean second-half tackle to stop Urena. He and his central partner Aaron Long limited Costa Rica's frontline to two shots.

The USA had 61 percent of the possession, thanks to solid performances from the midfielders, who benefited from the outside backs giving them extra options, and forwards who shed their markers. When it seemed the Ticos were gaining momentum early in the second half, after Johnson caught a deflected cross, Brenden Aaronson stormed up field, spun through a tackle, and started a long passing sequence that tamed the Ticos. Jackson Yueill's defensive work gave cover to the outside backs and the most influential midfielder, Sebastian Lletget. He could have done better with his three shots and none of his 10 corner kicks produced, but Lletget passed securely and at times cleverly, as in the buildup to the penalty kick foul, when he delivered to Arriola.

Paul Arriola's early forays down the right wing -- he won a corner kick 26 seconds in -- helped set the tone in the USA's favor. Only one of his four shots required a save, but he otherwise played with poise. Before Cannon got fouled for the PK, Arriola won a battle with Gonzalez, fed Jesus Ferreira in the middle, controlled the return pass from Lleget, and slyly set up overlapping Cannon. Ferreira didn't get a shot on goal, but how adeptly he settled Arriola's pass on that sequence was just one example of how valuable his ball control was for the USA. Early on he set up an Arriola shot, and his one-two with Ulysses Llanez set Lleget up for a good chance. Within a minute of kickoff, Llanez created a scoring chance when he chipped the ball to Long, whose header was deflected for a corner kick. By the fifth minute, he juked past a Tico defender for a shot, and hit a cross for another chance. It didn't always come out perfectly, but whenever Llanez got the ball one sensed the potential for something exciting -- like when he befuddled Keysher Fuller with a spin move in the ninth minute. In 50th minute, LLanez scored his first USA goal with a crisp penalty kick.

A fine header Gyasi Zardes into the net was correctly called offside. Mark McKenzie replaced Long on the backline and did just as well at keeping the Ticos at bay. Chase Gasper kept up the wing pressure after replacing Vines.

TRIVIA: Saturday's win pulls the USA ahead of Costa Rica in their all-time head-to-head record, dating back to their first encounter in 1975. It now stands at 17 wins for the USA, 16 Costa Rica wins, and 6 ties.