For most of the game it looked like an exercise for Fede Valverde, Luka Modric and Casemiro. The midfield trio bossed the game and Atletico wasn’t lifeless, precisely, but they hung on the ropes, with their gloves up and heads down for most of the game.

It was a first for Diego Simeone, who’s teams have never been criticized for not working hard. Real won by the slimmest of possible margins, but the game didn’t feel that close, either. There’s a tendency to view the game through a kaleidoscopic lens sometimes, where at some point between the cameraman and your Roku TV set, the megabits acquire some delectable quality that never existed before. See no further than Saturday’s derby, which on that day, just like always, was presented as class warfare on a soccer field: Los Colchoneros (the mattress makers) against Castilian royalty.

The last decade has seen Atletico change dramatically into a virtual superclub, but as this season has revealed after its summer shakeup, the blue collar identity it used to make waves at the top is no longer compatible with the trajectory of its project.

The prevailing assumption — Real Madrid of wealth and podium residency en permanence, Atletico, of day laborer and upstart — reached a spectacular apogee six years ago, when the two teams met in the Champions League final. It was the first time two teams from the same city ever met so deep in the tournament, and the derby resurfaced on the biggest stage two years later. Only two weeks before that first final, Atletico became the only non-clasico team to win La Liga since 2003.

Atleti still played at El Vicente Calderon, which was situated next to the Manzanares river and designated them another nickname, Los Indios. The Bernabeu stadium, in northern Madrid, rises above Paseo de la Castellana beside swanky apartments and ritzy fashion stores.

Its players used the stereotype to their advantage, too: “It’s the working man’s team,” Atletico captain Gabi Fernandez said in a 2014 interview. “We’re changing the story through our commitment to giving people what they want: A team they can feel proud of, that win or lose, they’ll say, ‘Damn, this is my Atletico.’”

And Simeone employed this underdog mentality masterfully. After Atleti’s La Liga triumph, his "If we believe, and work hard, we can succeed" quote became a slogan of sorts for the mattress makers who watched their soccer in a working-class area for most of their lives. 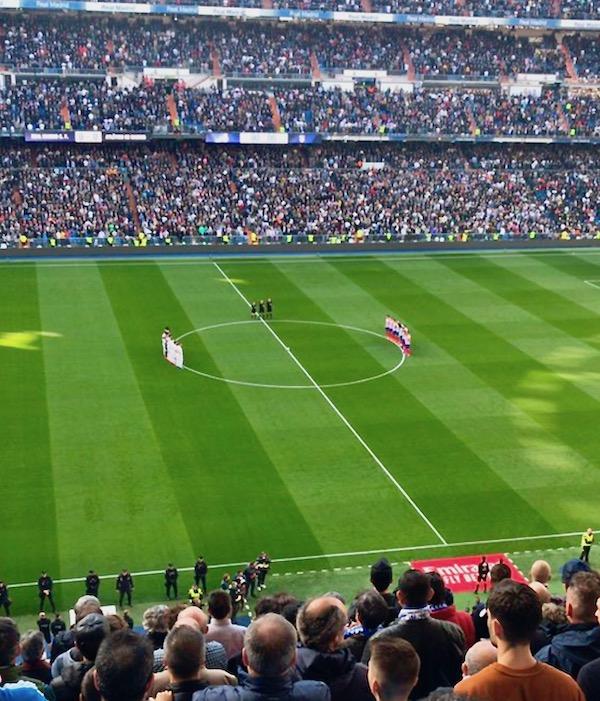 After a minute of silence in honor of Kobe Bryant at the Bernabéu, LaLiga leader Real Madrid beat sixth-place Atletico Madrid, 1-0.

With the heights Atletico has reached on and off the field in the last decade, though — Forbes currently has the Rojiblancos as the 12th most valuable team in the world, the team is undergoing a painful schizophrenic split, a divide between an outdated identity it uses for motivation and the reality of its new team, new brand and new expectations.

Its identity as a team with blue-collar origins only ever partially held up: they’re called the mattress makers because Spanish mattresses had red and white stripes in the 1950s, not because its supporters were day laborers. In fact, in that era, Atlético Aviación, as it was called, was partnered with the Air Force.

Further, Atleti has played in the glamorous Wanda Metropolitano in the suburbs of Madrid since 2017, where in one of its 68,456 seats often sits the King of Spain himself.

And after a signing like Joao Felix and the global reach Atletico’s media team has sought, and found, over the last decade, Atleti is a superclub trying to play with the identity of an underdog.

It isn’t working for Simeone, a coach who thrives on defying expectations but finds himself today having to meet them.

Just maybe, this dark spiral for Atletico only ends when its hierarchy chooses what kind of club it wants to be. To reclaim its form, perhaps, Atletico must ditch Simeone, the man who brought them so much in the first place, and enter a murky, faceless future, or reboot once more as the underdog in Madrid. But it can’t do both.