Singling out any one person from the U.S. women’s 2019 World Cup triumph isn’t easy.


The media turned Megan Rapinoe’s very good performance into a world-dominating performance. Julie Ertz won the U.S. Soccer Female Player of the Year award -- a deserving choice if we must make one.

But how much can we separate Ertz’s performance from that of those around her? Becky Sauerbrunn, criminally underrated by international award voters throughout her career, teamed with Abby Dahlkemper and Ertz to nail down the middle of the defensive third. Ertz was also part of another power trio to rival Rush and the Jimi Hendrix Experience -- the midfield triangle with Rose Lavelle and either Sam Mewis or Lindsey Horan.

So Rapinoe’s selection for the Golden Ball, Ballon d’Or and Sports Illustrated’s Sportsperson of the Year doesn’t sit right. She played a specific role, staying up front more than other players and taking spot kicks. The U.S. gave her ample opportunity to affect the game -- her 253 attempted passes were the most of any U.S. attacker, and she came through with 21 “key passes.” While she filled that role quite well, was that a larger contribution than the other players mentioned here?

What’s the common theme here? How were all of these people put in the right place? Who deserved SI’s top honor this year? 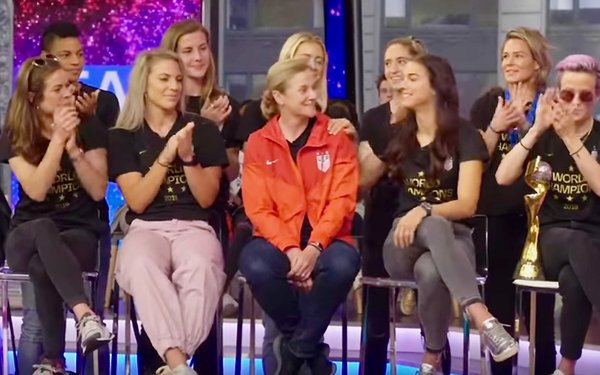 For the last of those questions, the answer is probably Simone Biles, the gymnast who seems to be from another planet. But a close runner-up for that honor, and the answer to the other two questions, is Jill Ellis.

That’s not to take away from the accomplishments of Rapinoe, Ertz, Sauerbrunn, Lavelle or anyone else who played last summer. Ellis could not have coached Thailand to the Women’s World Cup final. The U.S. had the best roster in the tournament.

But like Pia Sundhage before her, Ellis put players in roles in which they could excel. Rapinoe, dealing with a minor hamstring injury, was rested a couple of times and was still the only U.S. field player who covered less than 100 meters per minute. No problem -- Crystal Dunn and the midfielders had the rest of the left flank covered. Every player other than Dahlkemper and Alyssa Naeher got a break at some point and had their positions filled by capable subs in the right spots.

Beyond that, Ellis managed the most challenging task facing any U.S. women’s coach. She dealt with powerful egos.

That’s what Sundhage did best of all, taking a team that unraveled in the 2007 World Cup and putting the pieces together in the 2008 Olympics. Tom Sermanni wasn’t able to duplicate that feat.

On this team, many players have established a brand so powerful that they can be voted to the NWSL Best XI while making little impact on their clubs. Woe be unto the coach who dares to bench a player who can unleash the wrath of her fans upon him or her.

We’re still seeing that today in a couple of instances of people unbelievably taking shots at a coach who led the team to back-to-back World Cups.

“lol you know Ali is just sprinting forward and getting crosses in just to show J*** she could if given the chance,” Kyle Krieger tweeted after the U.S. women beat 53rd-ranked Panama. (Krieger, though, has a standing disclaimer that he is not speaking for his sister, and Ali Krieger showed her appreciation for the team’s depth when she claimed the United States had the “best team in the world and the second-best team in the world.”)

A more pointed criticism came from the ever-outspoken Carli Lloyd, who told veteran women’s sports reporter Howard Megdal she wouldn’t have played for the U.S. without a coaching change. Left unanswered is which player Lloyd was supposed to displace in the starting lineup. Alex Morgan (who may be displaced this time, depending on how quickly she can return from pregnancy)? Lavelle? Rapinoe?

Let’s restate -- these criticisms involve players who made the team. We’re not talking about Jurgen Klinsmann leaving Landon Donovan at home or Eric Cantona losing his place with France. Imagine the outcry if Rapinoe ends up as a supersub in the Olympics, even though the idea of resting her and bringing her on to terrify an opponent in the last 30 minutes has a certain appeal.

Ellis certainly made some mistakes along the way, most notably taking Rapinoe, who had suffered a horribly timed injury, on the 2016 Olympic squad and having to take her off after less than 30 minutes in the fateful game against Sweden. The change of tactics and personnel in the 2015 World Cup was either a stroke of genius or a move forced upon her by suspensions.

And things could’ve gone awry in France last year. The decision to take a seventh forward instead of another backup defender might have been disastrous if Dunn had been hurt or sent off.

But coaching the women’s team isn’t just a question of tossing out a ball and letting the players take over. It’s elite-level management. And few have done it any better than Ellis.