My view of the new rules after months of enforcing them

During the past six months, the majority of my games have used the new rules while the college and high school games that I officiated last autumn still used the old rules. Actually, college and high school soccer was ahead of its time as two new rules -- the chance to select the kickoff after winning the coin toss and carding of coaches -- were already in place in school soccer for decades.

So here is my view of the new rules:

• Attackers are no longer allowed within one yard of any wall of three or more defenders during the taking of free kicks. This eliminates all the pushing and shoving in the wall when attackers tried to move defenders away from the anticipated path of the ball.

• Goal kicks and defensive free kicks no longer need to leave the penalty area to be in play. Good at all levels and particularly helpful in the youngest ages of youth soccer as some kids had problems kicking the ball out of the small-sided penalty area.

• Carding of coaches makes it very clear when a coach is misbehaving. I really like that when the ref cannot identify who on the bench needs to be sanctioned, which happens on occasion, the head coach will receive the yellow or red card as he/she is responsible for the behavior of the bench.

• If the ref is about to issue a yellow or red card but the non-offending team takes the free kick quickly and creates a goal-scoring opportunity, the ref can now delay displaying the card until the next stoppage.

• Games stopped while the ball is in play such as for an injury now result in a dropped ball given to the team that last touched it, except if play is stopped in the penalty area, when it is dropped to the keeper. This avoids the manufactured restart where the team would play the ball to their opponents and that worked out great until it did not and a few very controversial goals were scored on the team thinking they were getting the ball. With the new dropped ball rule, everybody except the player receiving the ball (including teammates) need to be at least four meters from the ball. In my games, a midfield dropped ball resulted in a through-pass that led to a goal and another dropped ball in the attacking third almost led to a goal.

• The new rule on the dropped ball should say it is dropped to the team last in possession, not the squad that last touched it. If the ball is played and hits an opponent in the head and that player goes down, the ref needs to stop the game for a head injury. Using this scenario under the current rule, it would be dropped to the team with the injury (as they last touched it), not the team that last had possession.

• Handling in different ways, including that the new interpretation is complex (well over 200 words now in the Laws of the Game) and favors the defense.

• Accidental handling is a foul when it leads to a goal but that same handling is not a foul when committed by a defender or a player at midfield. This obviously favors the defense. Here is how ridiculous the rule can be from a game very early in the EPL season: 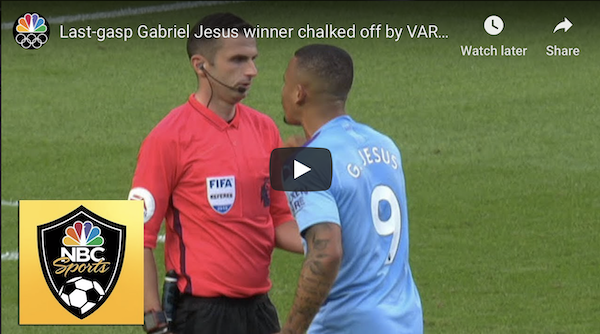 Note that the Tottenham players, the beneficiaries of this decision, also thought the call was ridiculous. But as players become more familiar with the concept of accidental handling, defenders will be dissenting when the ball goes near an attacker’s hand or arm.

Additionally, it is more difficult to determine whether the ball struck an arm than if deliberate handling occurred. I was an AR during a college game, with the new handling rule not in effect, when accidental handling might have led to the only goal of the game but I could not tell for sure as I was 35 yards away. The much closer ref was a bit screened and she could not determine if the ball had struck an arm or the attacker’s chest. We would have needed VAR to know for certain.

When I first authored "Preventive Officiating" a decade ago, I wrote this about handling to help guide youth soccer refs and it seems much simpler and fairer than the current rule:

The challenge is to determine if the handling is deliberate. A rule of thumb to use is that if the hand or any portion of the entire arm strike the ball, it is deliberate handling and should be called a foul. If the ball instead strikes a hand or arm, it is not deliberate and is not a foul. The exception to this is if a field player has the hand or arm in an unnatural position such as above the shoulder and the ball strikes it, handling should be called.

The one aspect about the new rule on handling that I like is a foul should not be whistled if a player is falling and the ball touches the hand/arm when it is between their body and the ground to support the body (but not extended to make the body bigger). This is common sense to me.

It will be interesting to see if college and high school soccer adopt the changes above made by FIFA for their upcoming seasons during the 2020-21 school year. College soccer is obviously played in the fall with diverse states playing high school soccer in different seasons of the year.

referees, youth
2 comments about "My view of the new rules after months of enforcing them".
Read more comments >
Next story loading