In a 6-0 win over Costa Rica, the USA delivered a more polished performance in its third straight mismatch of the tournament after opening with wins over Haiti (4-0) and Panama (8-0). But once again the inferiority of the opponent ensured there'd be no drama and no real test for the world champion in this early phase of the Vlatko Andonovski era. Both the USA and Costa Rica had already clinched spots in Friday's semifinals that will determine Concacaf's qualifiers for the 2020 Olympics. The Ticas, aiming for their first Olympic appearance, rested key players against the USA. Christen Press, with two golazos, provided the most excitement on Monday night in Houston. She has scored in four straight games. 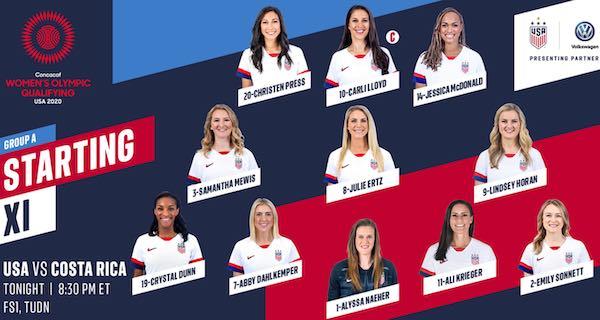 So far, the USA really hasn't needed a goalkeeper in the tournament. Alyssa Naeher didn't face a single shot.

Ali Krieger delivered the ball to Christen Press on the 3-0 strike and her pass to Carli Lloyd helped set up Lindsey Horan's goal. Her central defense partner Abby Dahlkemper also passed well, as one would hope considering how little pressure the Ticas applied. Life was easy for the outside backs, Emily Sonnett and Crystal Dunn, playing against a team without wingers. Dunn's activity up the wing lacked precision.

Samantha Mewis scored with a half-volley and a header. Lindsey Horan, besides her crisp finish, dominated the midfield -- winning balls and orchestrating play. Julie Ertz helped cover for fellow midfielders while also attacking.

Christen Press scored with her left foot from 24 yards to make it 1-0 and from closer range with an accurate blast to make it 3-0 -- both after evading defenders. Press also assisted on Mewis' goal. Carli Lloyd nodded the ball on to Press on the first goal and sent the pass that set up Horan's -- but misplayed her own chances. She was lucky not to get cautioned for her foul on Katherine Alvarado when she failed for the second time within minutes to time a heading attempt. Jessica McDonald scored the fifth goal and was constantly active on the wing, but like her teammates will need be more precise in her delivery from the wings against better opponents.

Kelley O'Hara made a blooper reel misplay on an early touch that should have set up a scoring chance but assisted on Mewis' second goal. Tobin Heath missed from close range. Megan Rapinoe has yet to find her form since returning from injury.