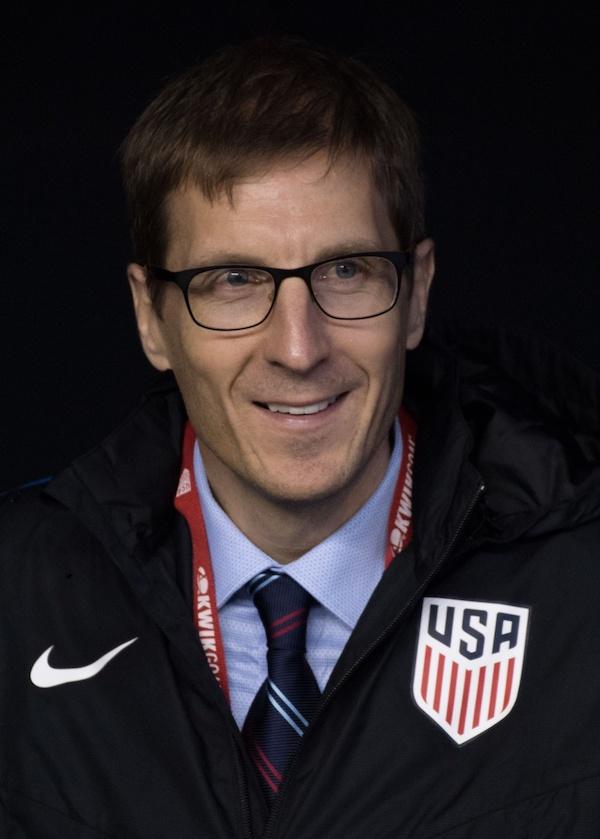 Jay Berhalter, who has had a huge influence on shaping American soccer over the last two decades, is leaving U.S. Soccer.

Berhalter, the older brother of U.S. men's national team coach Gregg Berhalter, advised U.S. Soccer senior staff he plans on stepping down from his position as chief commercial and strategy officer at the federation at the end of February.

On Tuesday, SI.com's Grant Wahl reported that Berhalter was not a candidate for the U.S. Soccer CEO position vacant since longtime CEO Dan Flynn stepped down last September. It was first reported in the Washington Post in October 2018 that Flynn planned to step down but a search firm had first been retained to work on the CEO succession in November 2017.

It once appeared Berhalter, Flynn's pick for the job, would be the new CEO, but U.S. Soccer president Carlos Cordeiro said he halted the CEO job search in May because he was not satisfied with the short list of candidates. A new search firm came on board in September. An updated list of finalists for the CEO position -- interviewed for the first time in December  -- included men and women, and one person from outside the United States.

In June 2019, the federation was rocked by the publication of scathing postings by a small group of current and former federation employees about a "toxic" work environment at U.S. Soccer. The New York Times categorized reviewers as having "open disdain for Flynn and Berhalter." In December, Cordeiro dismissed the notion that the federation's working environment was "toxic" but he did say the Glassdoor reviews were a wake-up call.

Cordeiro's characterization of the reviews came after a presentation to U.S. Soccer's board of directors on Dec. 6 during which a good portion of the three-hour session was spent addressing workplace issues. It followed an engagement survey on workplace conditions -- a direct result of the Glassdoor reviews -- conducted by the Leadership Research Institute and "some pretty telling stories came out of this," said Cordeiro.

Berhalter, who has always played a very hands-on role in U.S. Soccer affairs, became a lightning rod as the uncertainty surrounding the CEO succession drew on. The publication of the Glassdoor reviews followed rumors at U.S. Soccer House that Berhalter would be named to the CEO position.

U.S. Soccer has been mired in litigation related to a host of issues, notably gender discrimination claims filed by members of the U.S. women's national team about how they have been compensated and the support they received during the tenure of Flynn and Berhalter.

Berhalter, 48, was on the committee that selected Earnie Stewart as the first U.S. men's national team general manager, and that drew considerable scrutiny when Stewart, now U.S. Soccer's sporting director, selected Gregg Berhalter to the fill the men's national team coaching position vacant for more than 13 months after the USA was eliminated from the 2018 World Cup and Bruce Arena stepped down.

Cosmos Country. The Berhalters are a product of the soccer boom of the late 1970s and early 1980s, growing up in the shadows of the Cosmos in Tenafly, New Jersey.

''We watched the Cosmos at Giants Stadium and Italian League highlights on Sunday morning on RAI,'' Jay Berhalter told Soccer America in a 2006 interview, ''and my brother and I played every day in any weather. New Jersey was an incredible place to experience the game and learn about many different styles of play because you had so many different backgrounds on the field at one time -- players who were from South America, Central America, Europe, Africa all had different ideas about the game, but ultimately had to play as a team. If you look at the players who have come from our area, it's pretty remarkable.''

Jay Berhalter played for the Union Lancers, one of the most successful youth teams ever assembled in the country, and later attended Notre Dame. He learned his soccer from legendary coach Manfred Schellscheidt and Schellscheidt's assistant, Bob Bradley, but said he ''had a rather disappointing career at Notre Dame.'' (Gregg, on the other hand, was selected to two World Cup teams and spent 15 seasons in European pro soccer and three more  in MLS with the LA Galaxy.)

Berhalter started out his career in soccer management as a volunteer with the 1994 World Cup organizing committee.

''I started as a volunteer and several months later was hired in transportation,'' he said. ''Because the business infrastructure in the sport was just starting to develop at the time, many of us got the opportunity to experience multiple aspects of the event and learn about overall event management in a very hands-on manner. Each day was really a chance to learn and to apply that towards managing a process to help the event succeed.''

After the launch of MLS, Berhalter joined the MetroStars, where he worked under Charlie Stillitano, the general manager, until moving to the U.S. Soccer Foundation in 1998. He joined U.S. Soccer in 2000 as chief operating officer when Flynn left the Foundation to become U.S. Soccer's CEO and general secretary.

Except for a five-year break when he worked at Kentaro Group, a now-defunct Swiss-headquartered company that handled media rights for many soccer federations -- including global rights for U.S. Soccer -- and also organized all friendly matches of the Brazil national team, Berhalter has worked at U.S. Soccer for the last two decades, holding such titles as chief operating officer and deputy executive director.

Berhalter's most recent title was chief commercial and strategy officer. While he worked on the business side, he had decades of experience with the workings on the soccer side, which contributed to his out-sized influence at the federation. Berhalter spearheaded the creation of the Boys’ Development Academy, which launched in 2007, and has overseen the federation's management of the NWSL, which launched in 2013.

No one with the possible exception of former U.S. Soccer president Sunil Gulati can rattle off the names of players that came through the U.S. national team programs, from youth to senior teams, for the last 35 years like Berhalter.

"Jay has a unique skill set," Gulati told Soccer America on Thursday, "that has been tremendously critical to U.S. Soccer on a number of initiatives and events, including the 2003 Women's World Cup and 2016 Copa America Centenario, which were organized in a very short time frame."

Berhalter played a key role as chief operating officer of the organizing committee when U.S. Soccer organized the 2003 Women's World Cup after China was forced to withdraw as host because of the SARS scare. The 2003 tournament didn't enjoy the critical acclaim that the 1999 Women's World Cup did -- for one thing, it didn't have the same happy ending -- but Berhalter and other staffers earned considerable respect for pulling it off with a lead time of less than four months.

The organization of another major tournament fell into the hands of U.S. Soccer in 2015 when the Copa Centenario, scheduled to be played in 2016, was thrown into chaos following the arrests of multiple Concacaf and Conmebol soccer leaders and marketing agents, who conspired to take millions of dollars in bribes as part of a widespread criminal enterprise involving international soccer events.

Berhalter served as CEO of the 2016 Copa Centenario. U.S. Soccer earned a $75 million windfall from the organization of the tournament. Its net assets doubled in a span of three years, from $83 million in 2015 to almost $167 million in 2018, in large part because of distributions from the tournament Berhalter organized. Those assets are now being spent down as U.S. Soccer is projecting deficits as high as $30 million a year over the next three years as its spending has grown to more than $140 million a year from less than $35 million in 2005.

“Having been involved in the sport since the 1994 World Cup and the start of Major League Soccer, working towards the mission of making soccer the preeminent sport in the U.S. has been a fantastic opportunity throughout my career,” said Berhalter in a prepared statement. “I am fortunate to have worked with so many passionate teammates and proud of what we have been able to accomplish together at all levels of the game. My decision to leave U.S. Soccer was not an easy one to make, but it’s the right one for my family and me at this time. Looking to the future, it is exciting to imagine the opportunities that lie ahead.”

Berhalter has certainly been a controversial figure at U.S. Soccer but above all his institutional knowledge will certainly be missed at a critical juncture for the federation that still remains without a CEO.