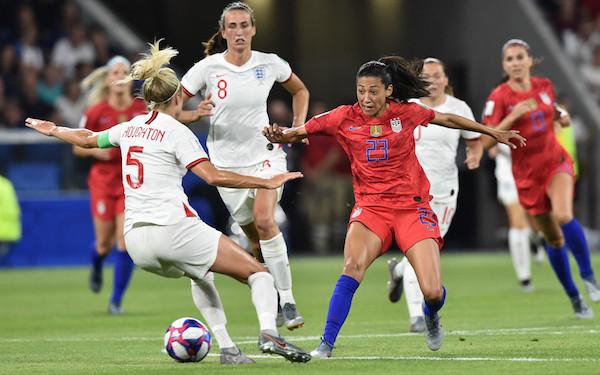 Christen Press would be the breakout star of these Concacaf qualifiers for the Tokyo Olympics, except she broke out some time ago and has been a star more or less since.

More or less, because the 31-year-old forward, who has scored 55 goals in her 133 caps, has typically been a role player, a super-sub of sorts, during her time with the U.S. women's national team, used in a variety of ways but usually in the shadow of the Yanks' bigger-name attackers.

Now Press, admittedly “approaching my last few years” in the sport, seems to be elevating to a new level. She's been superb in the USA's three group games in this tournament, all played in Houston, tallying the second goal in a 4-0 win over Haiti, scoring nine minutes after coming off the bench in an 8-0 rout of Panama, and scoring the first and third goals -- with a free kick assist on Sam Mewis' goal -- in Monday's 6-0 romp over Costa Rica.

Subtle shifts in the Yanks' attacking approach under new head coach Vlatko Andonovski have been to her benefit, and there's certainly thought that the U.S. is a better side with Press in the starting XI.

She figures to have a key role in Friday's all-important semifinal against Mexico at Dignity Health Sports Park -- winner goes to the Olympics -- and, if all goes as anticipated, in Sunday's mostly meaningless final against Canada or Costa Rica.

Is Press at the top of her game?

“I think more that I'm growing a ways, a never-ending ascension, hopefully,” she said when asked before the U.S.'s training session Wednesday on the fields in front of the LA Galaxy's stadium. “Physically, I feel good, and so, I think, if that's the case, you can always continue to get better.

Press is a Hermann Award winner at Stanford who has starred in Women's Professional Soccer, in Sweden and, first with the Chicago Red Stars and now Utah Royals, in the National Women's Soccer League. She didn't make her U.S. debut until she was 24 and has been a role player, mostly -- behind the likes of Alex Morgan, Carli Lloyd, Tobin Heath and Megan Rapinoe -- in the 2015 and 2019 Women's World Cup triumphs and the disappointing run that ended in the quarterfinals at the 2016 Rio de Janeiro Games.

She wasn't a perfect fit in former coach Jill Ellis' highly stringent system, which used the No. 9 as something of a target, of a pivot, in the attack, and was often employed on the flank and, more often than not, coming off the bench. Her signature moment: the header to put the USA ahead of England in last year's World Cup semifinal in Lyon, in which she started in place of an injured Rapinoe.

Andronovki, just starting to tweak things his way, has Press playing up top in a role that better suits her skills as a take-on dribbler who is most dangerous facing the net.

“I think that we're still a little bit in a transition period, just with the short time between him taking over the team [in late October] and us being in qualifying,” Press said. “It doesn't leave a lot of room for drastic changes. And so a lot of the pieces of the system that we had previously were carried over, and the things that we've changed are really nuanced.

“Those things include just a little bit more freedom in movement, and, I think, for the midfielders and attacking line a lot more opportunity to kind of see on the fly what the other team is giving us and to kind of move into those spaces and play off each other.”

She says she “feel[s] a lot more fluid” than in Ellis' system, which was “very structured, which brought a lot of clarity, a lot of confidence ... but also required us to go into halftime and then make big changes in order to adjust.”

She says, in response to the idea that perhaps she should be starting, that such a concept is “really not even how I approach the game.”

“I feel like I've had a lot of opportunities playing on this team from the start and coming off the bench and whatever role I'm given, I have to be excellent at it ...,” Press said. “It [was] a hard adjustment to going for being a great substitute, but that's something I had to do in order to support the team and help with the World Cup, and it was a very intentional thing in learning how to get into the emotional rhythm of coming on in the middle of chaos.

“Obviously, with a new coach, there's always new opportunities, but I think I'm ready for whatever could possibly be thrown my way.”

Andonovski says his system will be an “evolution” designed to make the team more dynamic, and more of it will be implemented once qualifying is over.

Press, whose opportunity to start was enhanced by Morgan's absence for pregnancy, likes the possibilities of what she could do in Andonovski's system.

“I think in the role of the 9, kind of in the last couple years but even a little bit now, it has been a lot of target, back-to-goal play, getting on the end of crosses,” she said. “I think as a 9 I bring something a little bit different, in stretching the line, creating pockets in seam two, actually being able to be a false 9 at times and set play.

“I haven't done that in a long time. Here and there in a two-front, you kind of have that freedom, but I've done it my whole life, so I always feel more comfortable there.”