The USA cruised to a 4-0 win over Mexico that was more scrappy than stylish to book a spot at the 2020 Olympics in Japan. With Rose Lavelle's opening goal, the USA has scored within five minutes of kickoff in all four of its games at the Concacaf Women's Championship. The USA faces Canada, which qualified with a 1-0 win over Costa Rica, in the final on Sunday. 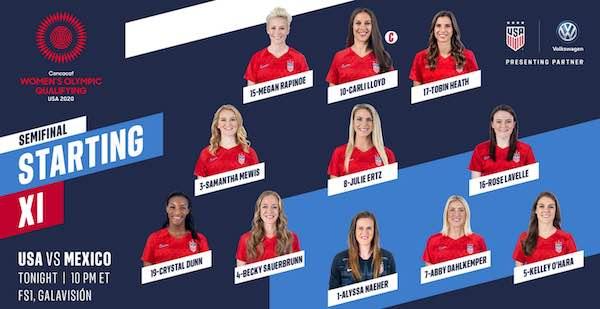 Crystal Dunn delivered an excellent cross-field pass to Rose Lavelle in the 25th and a fine cross to Christen Press in the 71st minute, but could have done better with a few other passes from wide. She was defensively flawless, as was the other outside back, Kelley O'Hara, who played a big part in the fourth goal by alertly intercepting a pass and sending Press down the wing. Becky Sauerbrunn and Abby Dahlkemper had it easy in the middle, with the latter thwarting a rare Mexican first-half attack and flying into Mexican territory in the first half to feed Tobin Heath.

With the USA's wing play marred by inept crossing, Julie Ertz and Rose Lavelle play through the middle proved particularly crucial. Ertz, who won a clearance with a diving header to help set up the first goal, passed accurately to many parts of the field. Lavelle's dribbling unsettled Mexico frequently and she struck superbly from 22 yards to open the scoring. Samantha Mewis scored with a crisp first-touch close-range shot and a searing 18-yard free kick.

Carli Lloyd's center forward performance, which included shots into the stands, was an area that didn't trouble the Mexicans. She twice missed a teammate in front of the goal with a bad pass. One of Tobin Heath's few good passes was skied over the goal by LLoyd early in the second half. Heath was fouled for the free kick that Mewis powered into the goal to make it 3-0. Megan Rapinoe hitting two passes in succession into a Mexican defender was indicative of how off her game was. She started the half with a shot far over the crossbar and managing to commit a handball and be offside on the same play. It wasn't a complete disaster because she delivered a nifty back-heel to Lavelle on the first goal and the low corner on the second that reached Mewis, although thanks to atrocious Mexican defending. The two assists to Rapinoe's name didn't come close to justifying a start over Press.

Four minutes after coming on, Christen Press scored to give her goals in six straight games and she became the USA's most dynamic forward of the evening. Lynn Williams served Lloyd up for yet another squandered opportunity in the final minute. Lindsey Horan added more misery to Mexico's feeble attempts to get through the midfield but ended the game with an awful shot.

TRIVIA: The USA will aim to become the first nation to follow up a World Cup championship with an Olympic gold medal.